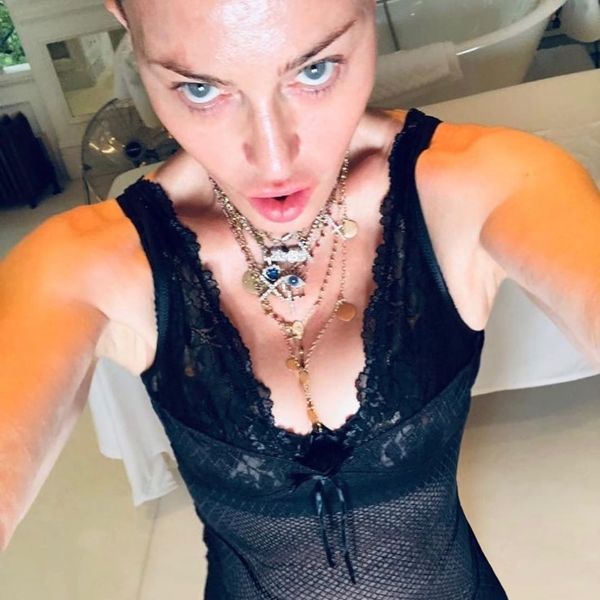 In the caption of a new lingerie selfie posted to Madonna's Instagram account today, the singer revealed that she's finally taking measures to manage the pain she's been experiencing for the better part of a year by getting "regenerative treatment" to replace "missing cartilage."

The superstar didn't immediately reveal the location where regenerative treatment would be used to replace the aforementioned missing cartilage, but news outlets are reporting that it's probably connected to the knee injury she incurred during a stop on the European leg of her tour supporting Madame X. Reports from the February show in question support the fact that Madonna fell off a chair at the end of performing "Vogue." After the concert, she was seen using a cane for support in several paparazzi shots around Paris.

Madonna on Instagram: “Finally going to get my regenerative treatment for my missing cartilage!! I would be jumping up and down if i could after 8 months of being…”

"I would be jumping up and down if I could after 8 months of being in pain," she wrote in the caption of her Instagram post yesterday about the treatment which will seek to replace cells and establish normal function of tissue and organs in her body. The photo set featured one shot from the top down and another cheeky snap from the back in what appears to be the singer's bathroom.

Madame X herself received a swell of support in the comments section from other celeb fans and friends, with RuPaul's Drag Race judge Michelle Visage commenting, "QUEEN it's all uphill from there." Frequent collaborator Mykki Blanco also commented on the sexy photos, writing, "Oh go off" followed by a series of exclamation points.