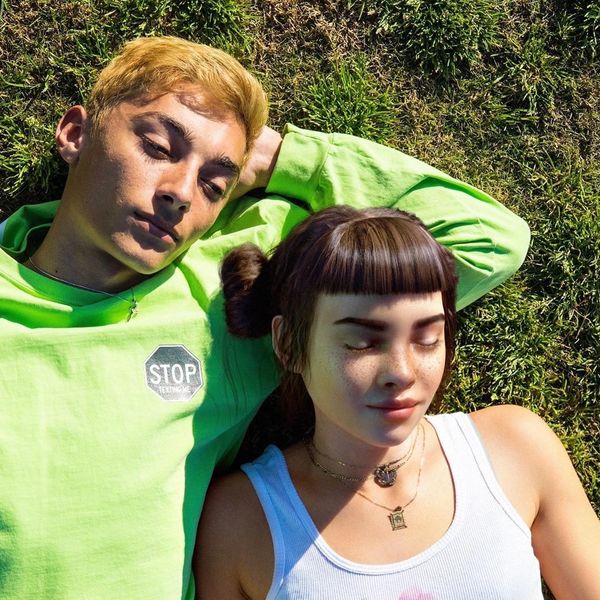 Lil Miquela Has 'Consciously Uncoupled' From Her Human Boyfriend

Your favorite "change-seeking robot with the drip" aka freckled, club-bunned virtual influencer Lil Miquela has been busy lately. She "attended" Paris fashion week, LA Frieze week, and Brazil's Carnival and has "been" in the studio on top if it. Now, Miquela's got sad news for her 2 million followers: she's and her human boyfriend Nick have broken up.

How did a bunch of pixels pull off dating a human man, you ask? When you yourself may be struggling with this task? I'm not sure. Here are some pictures of Miquela and Nick. Love wins?

Miquela on Instagram: “#TBT To me and angel boi lovingly captured on my super-cute new @samsungmobile Galaxy S20. I’ve never been big on Valentine’s Day because…”

In a long caption that begins, "This is the inevitable 'Conscious Uncoupling' post," the 19-year-old avatar explains: "Nick and I are no longer together, (but we love him the most, and if you come for him you can catch these hands. For real. I'm fragile right now, but fully down to fight)." Nick and Miquela had been "dating" since August of 2019.

"Basically, falling in love for the first time is FUCKING INTENSE," she continues. "I know, I know - I probably should have known that, but your girl is new to all this emotional shit, and it turns out I've still got a lot to learn. I thought it would be all rainbows and lollipops and sharing sweatshirts or whatever, but it turns out that there's way more to it than that. Wild, right? I wasn't ready for how much I'd end up NEEDING Nick, how alone I'd end up feeling when we were apart, and how much of myself I'd lose while trying to be 'perfect'. I'm super grateful that my first experience with love was with someone who cared about me with his whole heart, and even through the embarrassing breakdown and breakup that followed, this legit feels like a breakthrough? I've got a lot to do, a lot to see, a lot of myself to discover, and I know that I probably need to do that alone, you feel me."

Miquela on Instagram: “⚠️ Long caption Alert ⚠️ So this is the inevitable ‘Conscious Uncoupling’ post. Basically Nick and I are no longer together (but we love…”

Comments on the break-up post reveal that Miquela's followers were highly invested in this robot relationship. "Wow you're whack for that lmao everything was going well and you got cold feet," one commenter writes. "I don't believe in love anymore," says another. Someone else just wants to know, "Can you get coronavirus?"

A publicly navigated break-up is the logical next step in Miquela's journey towards becoming the ultimate relatable influencer, minus the corporeal form. However, some of her attempts to seem relatable haven't been so well received. She and the team behind her were accused of minimizing or making a joke out of women's experiences when Miquela posted a vlog about being sexually harassed (which… digital avatars can't experience) in an Uber.

In any case, best wishes to Miquela after her break-up. If she needs a rebound, maybe she should try Sim City.