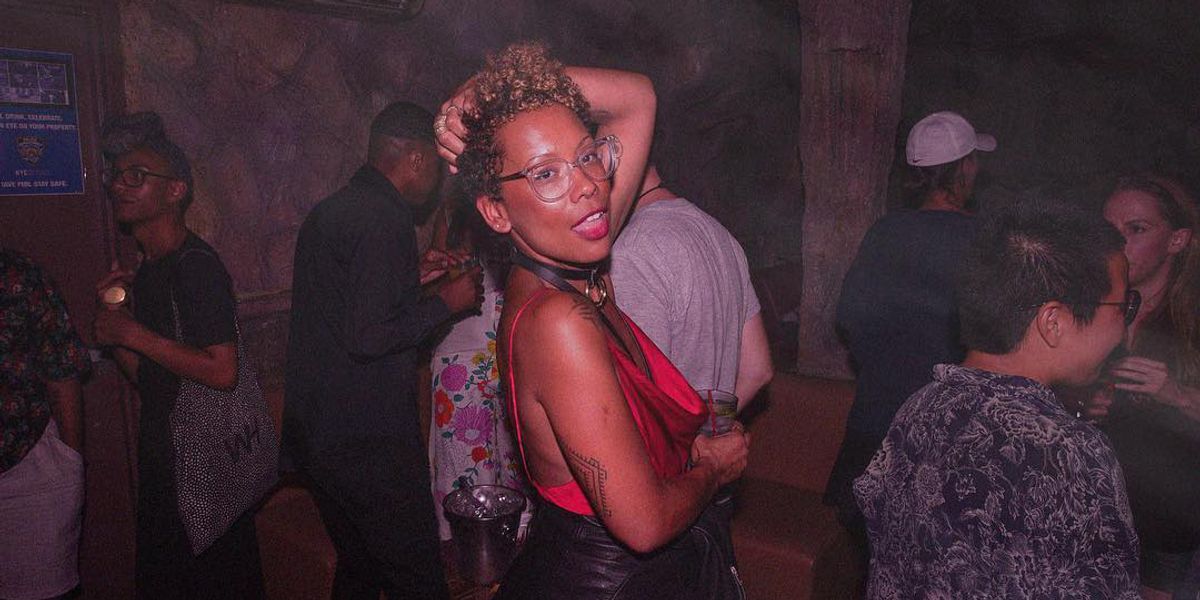 In a frothy sea of parties that cater to every interest, taste and demographic available, there's still somehow a void of nightlife spaces designated for lesbians, femmes and non-binary folks. Major lesbian nights and bars have shut down in cities across the country including Boston, San Francisco and Los Angeles in recent years, and even New York comes up short on events that are representative of the whole female queer community (and not just its white portions).

Enter GUSH, the new party organized by Angela Dimayuga and Pati Hertling to "create a safe space for queer women of color to work a play, with a lesbian focus." The party takes place in monthly installments, with past happenings taking the form of a dance party on the Lower East Side, a college party themed lesbian night at PS1 MoMA and a pool party on Fire Island. With its cheeky (yet dead-serious) pricing levels ($5 for femmes, $75 for straight men), GUSH sends a welcoming signal to queer women looking to connect with new faces and have fun in a safe space.

We spoke with GUSH co-founder and the award-winning former executive chef of Mission Chinese Food Angela Dimayuga about what GUSH is, how it works and why it's so important:

What is GUSH? What are the rules?

GUSH is lesbian intersectional party that features interdisciplinary hosts, DJs and performers that are queer or trans people of color based out of New York City. We usually like to get a mix of hosts that are non-nightlife driven so people of different industries can get together and meet each other. It's especially great for working people who don't go out as much, since there's an opportunity to meet people from different circles as you.

We use a ticket pricing system that our collaborator and friend, the artist Tiffany Malakooti, suggested as an homage to another queer party called Dagger in Brooklyn. Tickets are $5 for femme/non-binary folks, $10 for gay cis men, and $75 for straight men. The idea behind it is that it's a reverse economic system from the world outside of GUSH. Men make more money than women, so GUSH is cheaper for women and non-binary folks.

It's important to me that the hosts/djs and performers are all femme forward, and we are pretty militant about it.

How did it get started?

Back in May, I ran into my friend Tin Nguyen --an artist and designer for the line CFGNY (Clothes for Gays New York) -- at a queer party being thrown by Shui (a queer Asian spa concept slated to open in the next few years) and Pin-Up Magazine. Tin mentioned that he always noticed me attending gay parties and asked if I ever went to any "girl parties" (lesbian parties). I mentioned that I actually never really went to any lesbian parties because they were either deep in Bushwick, or the vibe wasn't really me or didn't represent the community that I normally navigate in in NYC.

At the same time, a friendship between Pati Hertling and I had begun to develop. Pati is always working just like me, but she's a lawyer who litigates for families that lost their artwork during the Holocaust by day and a curator in her free time. She's also a co-founder of a spirits company called Material Vodka. (Material offers organic vodka where a portion of their proceeds go to a bi-annual artist prize and honors artists in non commercial art practices).

We really became close after she invited me to a symposium she helped organize called The Women in the Arts Symposium at PS1 MoMA, then attended conceptual artist Anicka Yi's Guggenheim installation opening party which we hosted at Mission Chinese Food (where I was the executive chef) back in May. Pati and I have wanted to collaborate together for some time. She was at the same queer party hosted by Shui and Pin-Up, and immediately after the event we connected on starting our own party. It was the beginning of summer where there were a lot of opportunities to help make connections.

Pati is from a different generation of the lesbian NYC downtown scene. She was around for parties like Clit Club run by Julie Tolentino in the 90s, and has a nice network of lesbians that I didn't have access to. I wanted an alternative to scenes like Pat and Henrietta Hudson. I felt that lesbian places like those were not as inclusive and weren't diverse enough. Even "The L word" references were never enough for me--there were hardly any people of color involved and it seemed one dimensional and not aspirational for me. And there are many places that are gay but not enough for femmes!

Where'd the name GUSH come from?

The party name GUSH was devised back in June. In September 2016 I went on holiday in Iceland and visited this huge geyser (called Geysir). I took a video of the geyser erupting and I was really into the footage. I loved how photos of erupting geysers always looked phallic, but if you watched videos it looked really feminine, with the water squirting out of the ground and vapor that filled the air after the eruption. I also liked how the "gey" in "Geysir" sounds a lot like "gay." My lesbian friends and filmmakers, Orian Barki and Meriem Bennani, encouraged me that GUSH was a great party name, and that it'd be strong to use original iPhone videos for the flyers because it was really personal.

I'm really bad with photoshop and video, so we usually have a really DIY video flyer made on stories since Instagram is my preferred social media platform, and I love to make IG stories. It also reminds me of a post-internet version of the low-fi qualities of zine making.

What's the vibe of a GUSH party?


We've had four activations now, all with different vibes. I like the idea of having a roving party so we can decolonize a bunch of new spaces and meet people in new settings. The inaugural GUSH was at La Caverna on NYC's Lower East Side. La Caverna reminds me a of a Disneyland cave. It has sparkly floor and fake stalagmites and stalactites. There's even a figurine of Venus of Willendorf in the room. It's also a cave -- which is basically a vagina.

For the vibe, I always make a Material Vodka infusion (supplied by Pati). Our hosts get bottle service, and that first time I made a calendula and turmeric infused vodka. To make the room smell really nice, we utilized the hookahs they have at Caverna and I made a custom GUSH blend of shisha that had Egyptian licorice, dried orange peel, passionflower, mint, and jasmine bound traditional with honey. The air smelled really nice and sexy. I always think a good meter of a good GUSH party is new hookups. Which works when at the same time everyone is attractive, intelligent, respectful and down to have fun, and there are always new faces in the room.

The second GUSH party was activated in The Fire Island Pines. We were actually just acting as hosts and helped elevate a party thrown by Sarah Zapata, an artist that also runs a Drag King night called "Nightwood." We were actually asked to co-host the event next to Otherwild and the @Herstory Instagram account. The party was the finale to a performance art festival called Boffo.

Boffo organizers asked us to help host because they have been trying to to make the festival more lesbian inclusive, since Fire Island is predominately and historically mainly occupied by gay men. This was a pool party and we brought the GUSH hookahs,and made anise hyssop flavored Material Vodka cocktails served with chili salt and watermelon juice in mini watermelons. Zapata had a list of Drag Kings perform that afternoon. It was the sweetest and most diverse party all weekend.

The third GUSH was held at PS1 MoMA for the annual Back to School fundraiser. Every year they ask a different curator to throw the event. This year they had DIS Magazine curate, and we were asked to throw GUSH next to other parties they love in NYC. The idea is that we would each rep different college cliques. Glam was invited as well as Bubble T (a gaysian party!), with a fashion show and activations in every room.

The GUSH theme was a college "Gay-straight alliance" club with GUSH branded yellow pencils. Meriem Bennani, Orian Barki, and Leilah Weinraub created an installation in the room--a virtual spin the bottle, but instead of a bottle it a double sided arm with two fingers sticking out. Participants were instructed to kiss, French kiss, wildcard, or spank. Tiffany Malakooti set up at television that played looping clips of WNBA highlights. The vibe felt like a lesbian college basement party.

The room was also lit from a projector that projected the phrase "LESBIAN MAKE OUT ROOM" in black writing on a red background. Klaus Biesenbach, the director of MOMA, was in attendance for several hours enjoying, observing, and admiring in his Adidas sweatsuit and whistle around his neck. A friend of mine, Grace Naw from the Yellow Jacket Collective, served as the GUSH AV person and filmed the night with her over-the-shoulder camera.

The last GUSH was held at ACME downstairs. A pre-Thanksgiving, intimate gathering amidst the new chill outside! There was a disco ball and it was dimly lit. Tiffany Malakooti, Tigga Calore and SHYBOI all DJ'd, and we served Pu-Erh infused Material!

What are your hopes for GUSH in the future?

We hope to continue GUSH and keep expanding our list of collaborators. We'd love to throw GUSH in other cities like Mexico City, Berlin, San Francisco and LA. The type of party we want to throw is really about the people in attendance and who helps elevate the experience. We'd love to continue to throw the monthly in new spaces.

See scenes from previous GUSH parties below and check Instagram for future events:

View Slideshow
From Your Site Articles
You May Also Like
Music