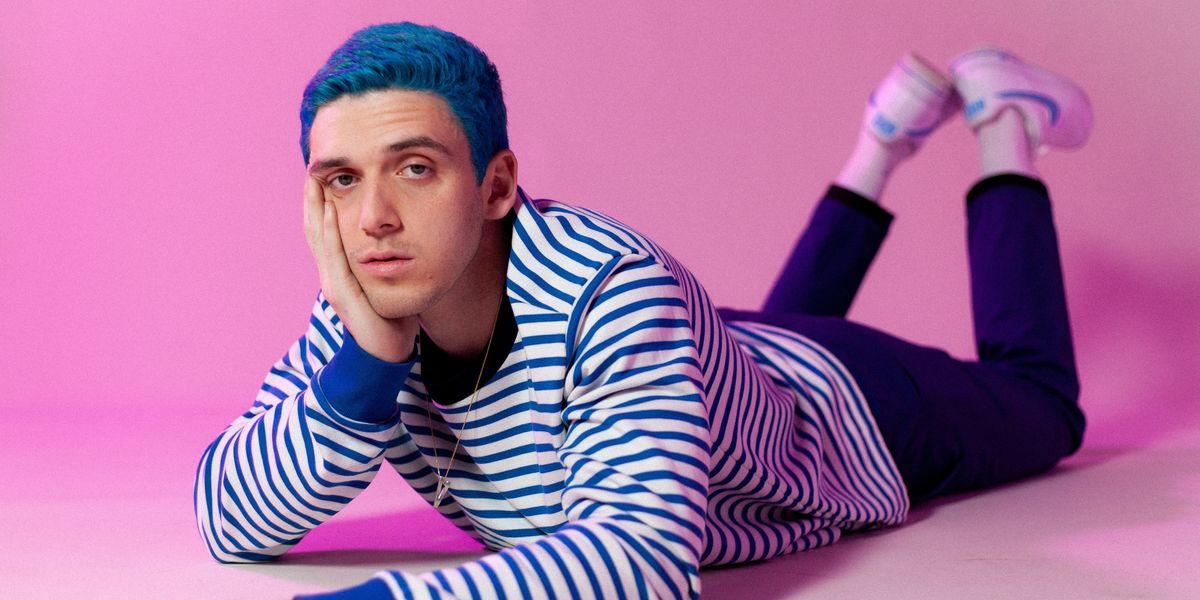 Lauv on the Internet: 'It's Literally a Drug'

This month, Lauv (real name: Ari Staprans Leff) released his song "Drugs & the Internet," a track that comments on the struggles Gen Z faces with balancing social media and general happiness. "I wonder what it feels like to be more than I am," he sings, before admitting on the chorus: "I traded all my friends for drugs and the internet" Having admittedly written the song during a time of "emptiness and depression," PAPER invited Lauv to reflect more on mental health in an exclusive op-ed:

I got asked to write this piece for PAPER, and to be honest, at first I was hesitant. Not because I wasn't honored or excited about the opportunity, but because my mind is constantly telling me I'm a fake; that I'm not qualified, or really even in a place to write about what I would want to write about.

That is how my mind works. I constantly question the validity of my own thoughts, my own experience. When I'm at my lowest, I obsess about all things negatively (usually having to do with the things that I love the most), yet I also feel that my struggle is invalid. In this place, I'm unable to be creative and I avoid the people I love. Or I try to fake happiness on the internet for validation, and resort to finding a mental escape via self-medication. Probably the one time I've been able to turn this whole cycle into something tangible was writing "Drugs & The Internet."

This article is not to talk about the song though — I'll let it speak for itself. But I decided that I would treat this as an open journal. I decided my hesitation itself was the essence of the problem. It's part of the illusion that my mind tells me — that my experience is not worthy of being talked about.

A few months ago, amidst going through the lowest mental low I had ever experienced in my life, I decided to get help. I had been going to therapy here and there, but I finally realized something just wasn't clicking. Now... mental health issues are something that run in my family, from depression, to OCD, to eating disorders, to bipolar disorder, etc. Genetically there was something in my blood that, for the longest time, I wanted to feel excluded from. I told myself what I was feeling couldn't actually be any of that. It was just a frame of mind I had to change. Something I simply had to rationally think myself out of.

"I was able to see that the way I was thinking wasn't rational [...] I didn't have to believe the negative story my brain was telling me all of the time."

Sitting here today, I've been diagnosed with depression and a form of OCD that is characterized mostly by obsessive anxiety.

Back when I was in college, a psychiatrist tried to put me on meds, but I felt above them. I felt like I was stronger, so I left them on my shelf. But when it came up again a few months ago, while I was still hesitant, I felt like I had run out of places to hide. I decided to trust my friends, my family, my team, my therapist, and my psychiatrist. I was put on a couple medications and started going to therapy weekly. Over time, I found myself in moments where I could finally see my own patterns from a perspective that was outside of my obsessions. I was able to see that the way I was thinking wasn't rational. It wasn't based on the reality I was actually living. This realization was the first time in my life everything started to click for me. That I didn't HAVE to obey the thoughts I had. I didn't have to believe the negative story my brain was telling me all of the time. I surrendered to the process, and it changed my life.

Still today, I struggle with a lot of the negative thoughts and patterns that hold me back. There was this desperate voice in my head telling me not to write this, but I decided to do it anyway. It was to prove to myself that I did not have to listen to my fears, and to open my brain for other people who might be afraid to confront their own issues. We live in a world that values mental health a lot more than it used to, and you can see this in the rise of things like meditation, but I believe there is still a stigma around the idea that mental illness could perhaps work like a physical illness. You wouldn't tell someone not to take insulin if they were diagnosed as diabetic right? So why should someone who is genetically predisposed to have out-of-balance brain chemistry be ashamed to try antidepressants, or at least to talk about the way they're feeling with a professional?

The other thing I want to talk about is the internet. I know its cliché, but it's true. We sit, stare at, analyze, and eventually re-take photos of ourselves in the most intimate and contrived positions.

We find the perfect moment to loop in Instagram videos, otherwise people would be bored.

We find the perfect lighting for a passing moment, the perfectly novel caption, otherwise the photo wouldn't seem as good (or better, I guess) than the actual experience.

We comment on peoples shit for *clout* (lol), but we can't seem to truly show ourselves, or the people that really care about us, love.

We re-wire our brains to be on a loop of dopamine rewarding, yet we wonder why real life sometimes just doesn't seem as exciting as it should. We wonder why we feel so fucking empty. Why we constantly beat ourselves up for not being as ~whatever~ as the people around us, or the people we don't even know.

And even talking about it feels petty (see: it's the fucking internet, relax dude).

We wonder why we have such self-esteem issues and feel a lack of connection.

"We're changing and losing ourselves, we're re-programming ourselves for immediate gratification, and we're damaging our souls."

It's because we do this to ourselves all day long, and we can't stop. It's literally a drug, and it has the power to slowly re-wire our minds and chip away at our spirits.

I don't have the solution.

Whether or not we get rid of likes and followers, I just think it's something we shouldn't feel so corny for talking about, online and in real life. It's something that needs to evolve. There's obviously so much good out there, but we're changing and losing ourselves, we're re-programming ourselves for immediate gratification, and we're damaging our souls.

And for what? Real love is all around us. Real love is inside of us. Maybe we just need a moment to breathe and remember...