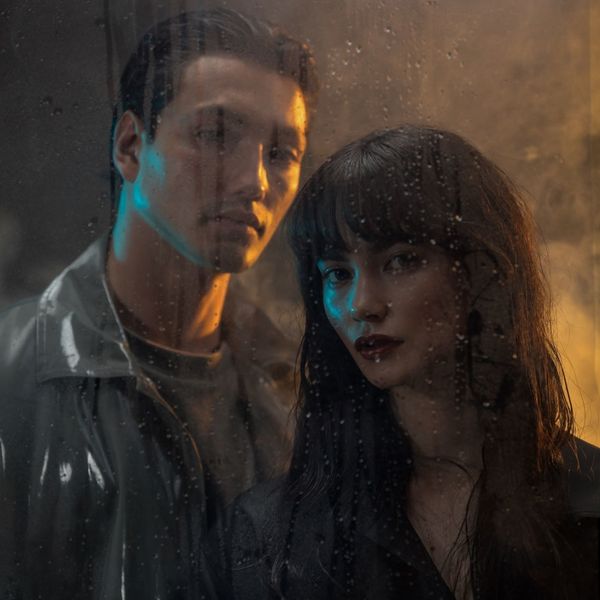 These Australian Siblings Are Taking Over Electronic

Australian brother-sister duo Josh and Amy Dowdle, aka Lastlings, may be relative newcomers to the indie electronic scene but they're already making waves. From supporting RÜFÜS DU SOL on tour to subsequently signing to the band's newly formed label, the duo's atmospheric brand of electro-pop has already begun to put them on everyone's radar.

Their new single, "I've Got You," is by far their most robust and polished to date. Featuring massive synths, growling basslines, and siren-like vocals, the song feels absolutely massive and paradoxically intimate at the same time. This track is evidence that the duo is continuing to grow more confident in their artistic voice with each subsequent release as they experiment with sound and lyrics.

Meeting the duo in person at Coachella, it's hard to ignore their impeccably chiseled features that have landed them numerous modeling campaigns with the likes of Reebok, Black Milk, and Valley eyewear. But in passing around a bag of cookies and extolling the virtues of Nicolas Jaar, it becomes readily apparent that the young 19 and 25-year-old twosome is incredibly genuine with a bright-eyed enthusiasm for everything the musical world has to offer.

PAPER sat down with Lastlings ahead of the release of their new single "I've Got You," out now, to discuss the song's inspiration and what's next for them.

What was the inspiration behind the song?

Josh: It was very inspired by this song called "Bad Kingdom" [by Moderat], and it has a really big driving bass in it. We took a lot of elements from that and then adapted it to our sound. It was really hard but really cool, and Cassian then really brought that driving bass to come through. Cassian helped us produce on it, and then Amy came in and took the lead on vocals and the lyrics.

Amy: It's about caring for your loved ones, and making sure they're ok. I wrote it in school, and it's about this person that was in my grade, as well. I wanted to reach out to them and help them, but they kind of kept pushing me away.

A: I don't know [Laughs]. I just remember sitting in this dark room.

J: We were so sick when we got to LA because we hadn't done a long flight like that in awhile. When we got here, we were just destroyed. It made all the sections difficult, but we pushed to finish the song.

How did Lastlings come to be?

A: It kind of just happened. When Josh was in high school his friends had a band. They would always play in the shed together and jam out. Usually I would play piano and sing to myself in my room. Josh was always really good at guitar; he always would be stuck in his room playing guitar.

J: Not anymore though, it's really just one of those things where you need to keep playing to get good. I forgot so much guitar. Amy is a classically trained pianist, and then I also started with piano and kind of quit halfway through. It was only in high school that I started to get back into music and guitar again. Then I was into Led Zepplin, Jimi Hendrix, and moved on to electronic and started producing. The first song we did together was this one we wrote on guitar, which is cool to see because it's really different to what we're doing now — just very drowned out, reverb-y, lo-fi kind of stuff. The new stuff sounds a bit cleaner.

J: Definitely had a lot of help, from friends around us, like the RÜFÜS [DU SOL] guys. Their feedback has been very important.

You're actually signed to their label, Rose Ave Records, how did you all initially link up?

J: We did a regional tour in Australia with them a long time ago, maybe like two years ago? Our managers were friends already and they were having chats; I think the music resonated with the guys. We became really good friends with them over the tour. There was talks of the label a long time ago, which we thought would be really cool, but we were not sure if it would actually happen. We all have a sound we're kind of striving for, which is really good.

You mentioned Moderat's "Bad Kingdom" earlier as an inspiration. What other artists do you draw inspiration from musically?

A: Yeah, Moderat, they're one of our favorites. RÜFÜS DU SOL is another one of the big ones.

J: It was really cool playing in their studio when we came for the first time. A lot of the stuff we were using is the same equipment they use on their record, as well. So we got to use the Prophet-6 [analog synth] for the first time and were like, "Oh yeah! That's the secret!" Everyone's going to start buying a Prophet now. Cassian has one now, as well.

Outside of music you both do a fair bit of modeling too. How did you get into that?

J: We started modeling when we were a bit younger; we got scouted. It really goes hand in hand with our music now; we always direct our own shoots and press shots. I think the last kpress shots we did were Blade Runner-themed. We were working closely with this brand called Song for The Mute that's based in Sydney. We became really close with them, and they always dress us for our shows — just handmade and well sourced fabrics, really nice stuff.

J: I think what we're really excited about is pushing a different sound.

A: And releasing the album...

J: Yeah, we really want to release the album. We're working so hard on it. It just keeps changing and changing, so I feel like we're almost getting stuck in this loop where we're getting technically better and always want to go back and fix something. It's got like really big tracks on it, like "Deja Vu," and "I've Got You." We're really excited about it.