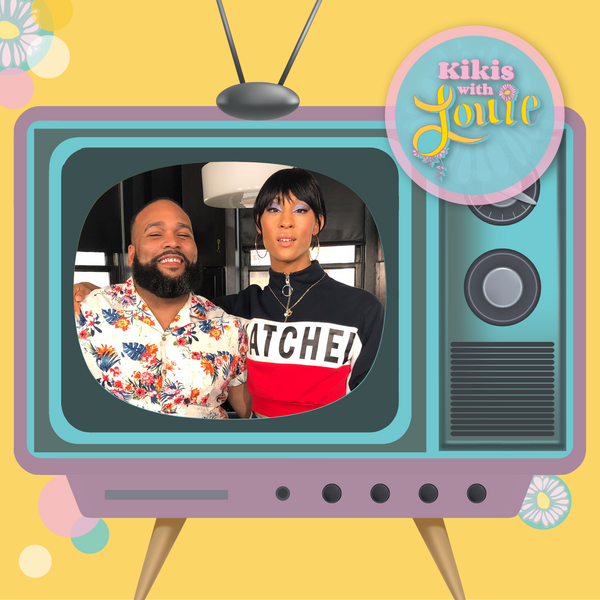 In a climate where the Trump administration is rolling back protections for the queer folks left and right, launching rhetorical and policy attacks on immigrants, and consistently using hateful language being parroted around the country, growing up as queer person of color in America can be terrifying.

Enter Kikis with Louie, a new YouTube show dedicated to creating a "safe and affirming space" for queer youth of color to learn, grow and ask questions. Produced by Advocates For Youth and the MAC Aids Fund, the show was created as a direct response to increases in rates of LGBTQ bullying and suicide ideation: recent CDC studies show that 47.7% of queer students have reported considering suicide.

"Unfortunately, we know many LGBTQ young people, especially youth of color, are left in the dark when they ask questions about sex, relationships, and growing up," said series host Louie Ortiz-Fonseca. "The goal of the series is to equip LGBTQ young people with information, and make sure they know that they are deserving of safe, happy, and healthy lives."

Each episode features a frank conversation between Ortiz-Fonseca, a queer Latinx artist and activist who got his start as an HIV peer educator, and a different artist, athlete or activist. In addition to famous guests, the crew also traveled to six different cities to chat with queer teen activists about their experiences and ideas.

For those unfamiliar, Ortiz-Fonseca defines "kiki," or queer lingo for an intimate conversation among friends, sharing experiences and gossip in the series trailer, and introduces some of the show's upcoming guests, including trans model Laith Ashley, musician Shamir, NBA player Reggie Bullock, and YouTubers Amber Whittington and Brendan Jordan.

Beyond inspirational stories, the interviews also aims to give queer youth practical tools to navigate the complex realities they face, and the episodes include how-to's on everything from how to legally change your name and what to do in a police encounter, to how to put on a condom.

"As someone who grew up Black and Queer in rural Texas, I know first-hand that when you're feeling isolated, witnessing a person who shares your lived experiences thriving can feel like necessary oxygen," said Lincoln Mondy, series director and Senior Manager of Strategic Projects at Advocates for Youth. "That's why we created Kikis with Louie, so that LGBTQ youth across the country can see people who look like them doing the necessary work to unpack stigma, identity, mental health, and other topics that we're often told to bury."

The pair chat about the erasure of trans people within the queer community, the need for trans-inclusive sex-ed, and why it's critical for LGBTQ kids to learn about queer history.

"Even though the LGBT community has been out there when it comes to Pride and everything... the T was one of them that got lost in the mix..." Rodriguez explains.

"A lot of people forgot that African American women, Latina women of color who are of the trans experience, they forget that we were the women who kind of cultivated the ballroom culture in order for a lot of drag queens to be drag queens, in order for a lot of gay men to live out their fantasy as far as being feminine and comfortable in it… Sylvia Rivera, Marsha P. Johnson, the list goes on."

Check out the premiere episode below, and tune into on YouTube, where a new Kikis with Louie episode will go live every Thursday.

Photo via Advocates For Youth