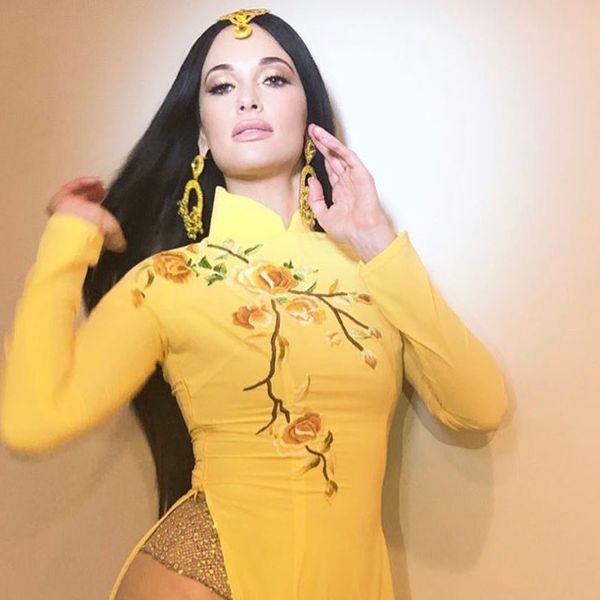 What Kacey Musgraves’ Vietnamese Dress Taught Us About Cultural Costumes

Appropriation is sometimes harder to spot than outright racism — after all, it's not just your average Trump-supporting uncle who falls victim to the often subtle manifestations of microaggressions. Countless well-meaning, socially liberal people and celebrities have been accused of such offense in their outfits — from Madonna's Amazigh ensemble to Katy Perry's Japanese ensemble and Kim Kardashian's box braids, for one.

But the latest in this long line of stars is particularly disappointing: earlier this month, weed-smoking, LGBTQ-friendly country icon Kacey Musgraves appeared at her Dallas concert sporting a Vietnamese áo dài, a traditional two-panel dress that's usually accompanied by flowing silk pants. As a Vietnamese-American, I can see why she'd want to: it's a beautiful dress adorned with colorful designs and worn skin-tight — elegantly accentuating every curve without showing any skin.

The problem? The 31-year-old singer forgot the pants. And then she went and paired it with what resembled an Indian maang tikka, a traditional wedding headpiece.

The reaction to the outfit was swift on Twitter and in social media groups, mostly from Asians and Asian-Americans. A few were angry that Musgraves wore the dress at all without acknowledging its origins. More were quick to point out that mixing a Vietnamese dress and Indian headpiece makes no sense. And pretty much every Vietnamese person who commented on the subject was up-in-arms about the fact that Musgraves had left off the pants, creating an inaccurate, oversexualized version of our revered áo dài.

It’s disappointing to see the beautiful Vietnamese áo dài worn like this. It’s meant to be worn with the pants. Per… https://t.co/5Wuhw9mBAU
— Follow: Find Triet (@Follow: Find Triet)1571018010.0

Many, like myself, were quick to first acknowledge an appreciation of Musgraves' uplifting and genre-defying music (I still went to her concert in New York City the following week). And there was plenty of to-be-fair caveating that she probably didn't realize the look was offensive. But when push comes to shove: intention doesn't equal impact, and, whether she was aware or not, Musgraves' outfit recalls a long history of exoticizing and sexualizing Asian women and women's clothing.

"Imagine seeing your national traditional dress being disrespected onstage," said Youtube mega-star and beauty blogger Michelle Phan, weighing in through an Instagram story. "Since she's a public figure, she might influence more people to think it's trendy...I'm sure there was no intention of causing harm, but people are just tired of narratives that perpetuates the fetishism of Asian women."

Phan is right. The last time a bottomless áo dài was presented to the mainstream public was probably during the Vietnam War—a painful time during which thousands of American soldiers turned to Vietnamese prostitutes and otherwise forced themselves on local women to escape the atrocities of war. Guidebooks and cartoons of Vietnamese women from the 60s and 70s depicted them as fun diversions, at best. And of course, there was the now-infamous "me love you long time" scene from the 1987 Vietnam War film Fullmetal Jacket.

"Disrespecting the áo dài in such a sexual way just further perpetuates the implicit but pervasive notion that Southeast Asian people — not just women, but also youth and queer folks — serve a single purpose: sexual service to white Westerners," says Mai Nguyen Do, a Vietnamese American politics researcher and writer who publishes poetry under the name Đỗ Nguyên Mai. "The fetishization and oversexualization stems from colonization and occupation. Perhaps the most notorious example of this — popularized by Miss Saigon — is what happened with Vietnamese women. U.S. soldiers in Saigon were common patrons of local sex workers, and that's where the narrative of the poor, sexually deviant Vietnamese woman awaiting a white man's touch to save her comes from."

It may be a stretch to say that Musgraves should understand the full historical context of the dress she wore. But that's the difference between cultural appreciation and cultural appropriation: when you truly appreciate something about another culture, you put in the work to understand it, and to present it the way it's meant to be experienced — out of respect for the people to whom it belongs.

While media in Vietnam, a conservative country, has not been quite as gentle in its critique of Musgraves' choice of outfit, it's important to note that Vietnamese people generally do love seeing foreigners wearing áo dài. I, for one, am happy that this whole incident put me onto the looks worn by the likes of Naomi Campbell, Tyra Banks, and Rihanna — not for nothing, they're all Black women — who were all praised for their interpretation of the dress.

"If a person takes the time to understand a culture and respect the significance of a traditional piece of clothing, I'd say by all means go for it!" says Victoria Loi, a Saigon-based model and photographer. "But to transform our áo dài into a sexualized costume — that's just not cool. It's degrading and disrespectful. I just don't understand how her or her stylist thought it was okay to wear it without pants and take photos like that."

Related | Why @EmoBlackThot's Identity Reveal Hurt Black Women So Much

Indeed, the blame isn't on Musgraves alone. The look had to be approved by her team, her stylists, really anyone who saw her before she snapped those fateful photos. And for what it's worth: I think Musgraves is a good person. I mean, if you've ever met someone special after a hard or toxic relationship, "Butterflies" hits you right in the stomach and makes you feel something again. But if Musgraves is truly to be the inclusive country queen we deserve (and that she's being presented as), she should at least acknowledge the offense to some of her fans.

"A simple apology statement would probably be sufficient — if she just apologizes and makes clear that she's learned from this incident, I don't think many people would hold this incident against her for very long," Do says. "It's not just Musgraves that's committed this error, and I've certainly witnessed much harsher reactions to others who've made the same mistake. The general reaction I've observed has hardly been one of 'canceling' her, but rather educating her and the rest of the public."

If nothing else, I have hope that others will learn from Musgraves' mistake — especially on Halloween. If your costume is offending someone, there might be a deeper reason why. Have the patience to listen and the range to understand.