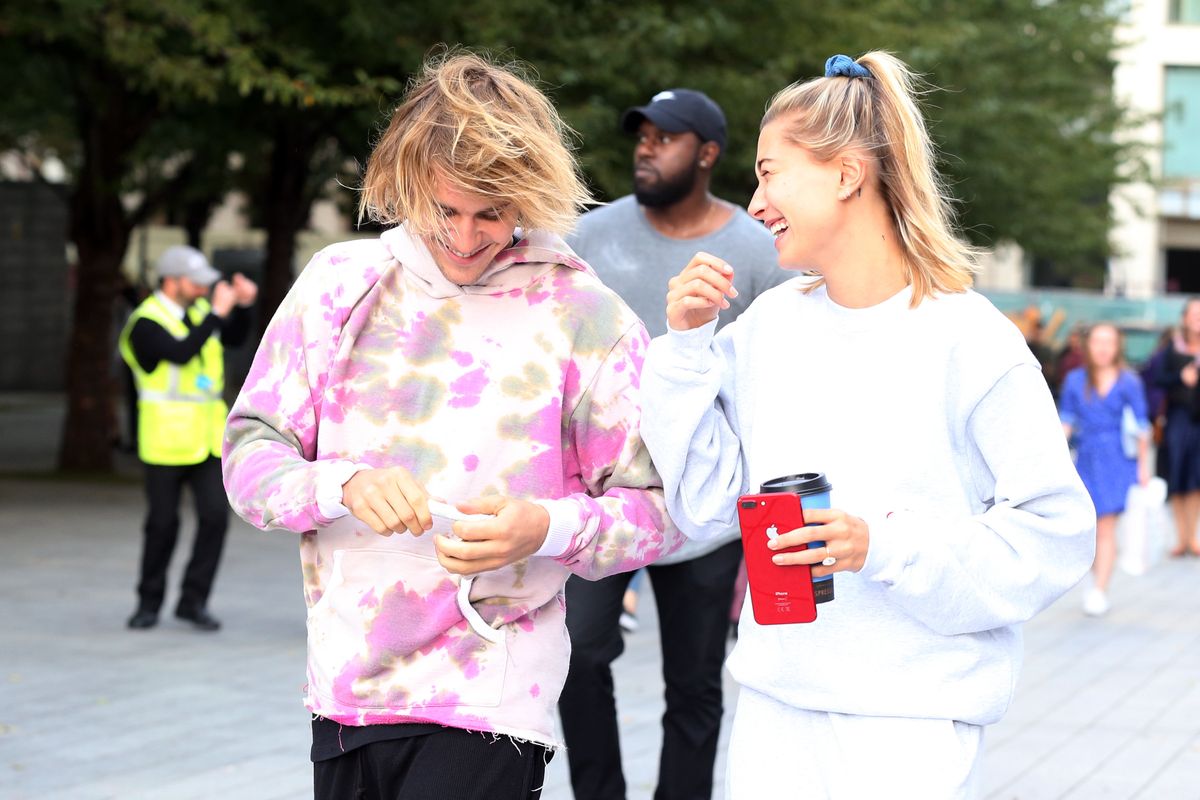 Justin and Hailey. Hailey and Justin. Annie Leibovitz. Matching polka dot beach outfits. Hipster church pastors. It's a Vogue cover story, baby (baby, baby, ooh) and the first big interview that the newly-married Biebers have done as a couple. Justin hadn't been profiled by a magazine in two years.

Vogue on Instagram: “Newlyweds @justinbieber and @haileybieber are our March issue cover stars! Tap the link in our bio to read their full interview.…”

So what do fans get out of it? A few things. The fawning profile — at one stage, reporter Rob Haskell declares that he feels "called upon to love and protect" his primary subject — clocks in at 3, 600 words, many of them "boo." It contains vividly described incidences of PDA ("[Justin] climbs over the sofa, squeezes between Hailey and the bolster and enfolds her in his arms; he spins his body around and puts his head in her lap, then jumps up again, bathes her neck in kisses, and whispers endearments"), multiple references to God and Jesus (although Justin confusingly maintains that he "wouldn't consider" himself religious), and some dark throwbacks to Bieber's troubled pre-Purpose period, during which he was addicted to Xanax and made headlines for urinating in a mop bucket.

Justin and Hailey’s age gap was creepy at first

It is well established at this point that Hailey met Justin for the first time as one of his tween fangirls, in 2009, backstage at the Today show. Uncle Alec Baldwin had organized the tickets. Hailey was 13 and Justin was 15, and they say the age gap was "weird" for those first few years. But they eventually re-connected at a Hillsong church service, as Hailey would have it:

"One day Justin walked into Hillsong and was like, 'Hey, you got older.' I was like, 'Yeah, what's up?' Over time he became my best guy friend. I was running around with him as his homie, but we weren't hanging out [romantically]."

They did date for a little while about three years ago, although both imply some kind of "betrayal" occurred to prematurely end things. But after reconnecting at yet another megachurch service in 2018, they quickly fell back in love: "The common denominator, I promise you, is always church," Hailey describes. "By then we were past the drama. I just gave him a hug. By the end of the conference, he was like, 'We're not going to be friends.' I was like, 'We're not?'" They were engaged within the month.

Selena Gomez was off the table

Let's hone in on that moment of "betrayal." You can safely assume that it was Bieber's longtime on-off romance with Selena Gomez that held him back from seriously dating Hailey between 2009 and 2018, although Vogue wouldn't dare insinuate it. Gomez, who has shared headlines with Bieber for more than a decade now, and is for many Beliebers a subject of extreme fandom, does not get one single passing mention in the profile. She has been written out of history. Interesting! And also super irritating. Justice for #Jelena.

Justin and Hailey were celibate before marriage (hence the rush)

Finally, some confirmation on this point: that whirlwind courthouse marriage was the product of extreme Christian horniness. According to Vogue, when Justin and Hailey reconnected at a church service in 2018, he was in the middle of a self-imposed celibacy period. As part of a renewed commitment to God, he supposedly hadn't had sex in more than a year, and wasn't about to break the streak — not even for Stephen Baldwin's model slash TV presenter daughter. As Justin would have it, sex wasn't the only reason her and Hailey rushed to the altar. But it was a major factor:

"Justin admits that while a desire finally to have sex was one reason they sped to the courthouse, it was not the only reason. 'When I saw her last June, I just forgot how much I loved her and how much I missed her and how much of a positive impact she made on my life. I was like, Holy cow, this is what I've been looking for.'"

Also, they maybe hate being married?

Justin and Hailey have only been married and cohabiting since September of last year, but are apparently struggling with spending so much time together in luxury hotel rooms and sprawling Washington ranches owned by church pastors. Depending on your level of cynicism re: Hollywood relationships, their casual admissions on this subject are either endearing and honest, or early symptoms of inevitable divorce.

"The thing is, marriage is very hard… That is the sentence you should lead with. It's really effing hard."

"Fighting is good... Doesn't the Bible talk about righteous anger? We don't want to lose each other. We don't want to say the wrong thing, and so we've been struggling with not expressing our emotions, which has been driving me absolutely crazy because I just need to express myself, and it's been really difficult to get her to say what she feels."

I'm worried. By the way, they reportedly don't have a pre-nup. Another point that Vogue casually skips over.

Justin does not regret the monkey incident

In 2013, Justin Bieber's capuchin monkey Mally was seized by German customs authorities at Munich airport. Turns out you're not supposed to travel internationally with endangered species pets. Animal rights groups were furious, but Bieber, then 21, was unrepentant. Despite his pleas, Mally was never returned to the singer. Of the infamous incident, which he characterizes as overblown, Bieber says only this: "People made such a big deal of that... It's like, if you had the money that I had, why wouldn't you get a monkey? You would get a monkey!"