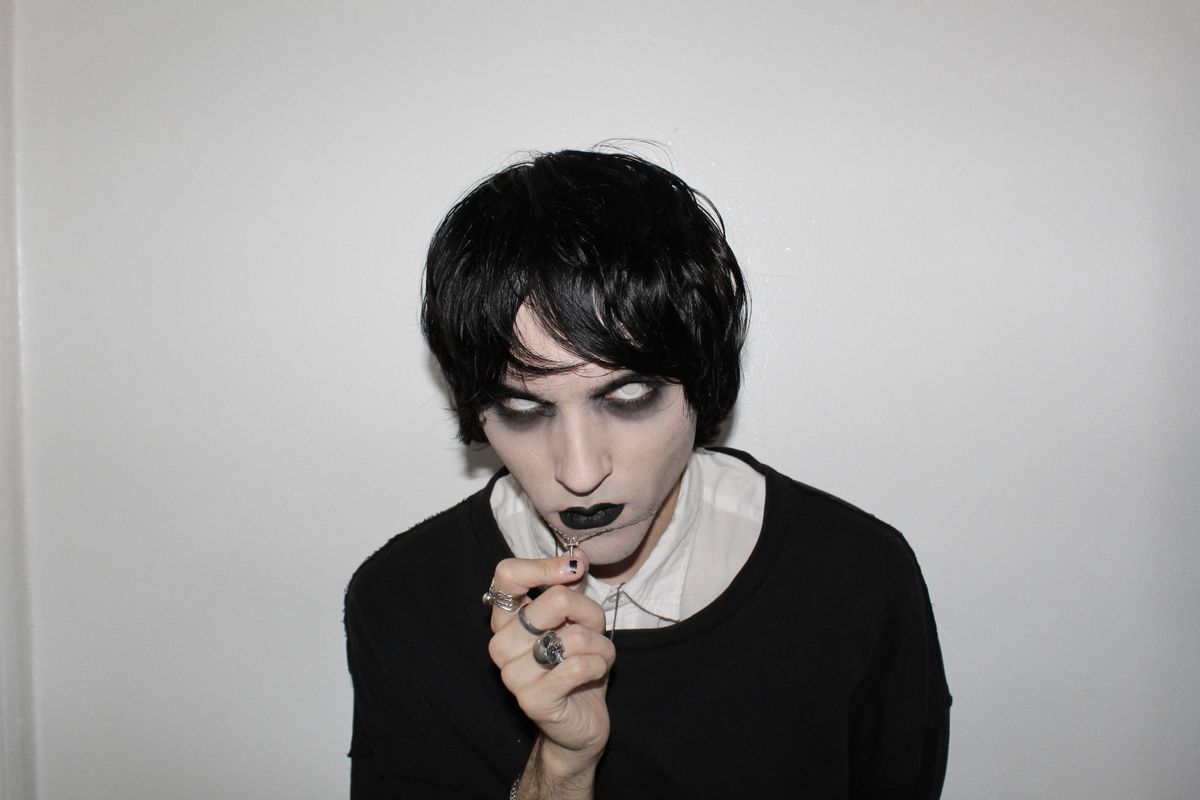 Johnny Goth has delivered his latest spooky offering just in time for Halloween. Though you might not be able to partake in the usual festivities this year, the 24-year-old Los Angeles native's album, The Great Awakening, is certainly going to help you get in the spirit.

The full-length effort sees Goth expand his signature brand of moody bedroom-pop, five years after his first single. His sound could be likened to Marilyn Manson, paired with a pained angst reminiscent of Lil Peep, so it's no surprise he's garnered a similar cult-like following in recent years.

The 10-song collection of goth-rock songs — with titles like "Soon As I'm Dead" and "Resurrection" — is what you'd expect on a soundtrack for one of Tim Burton's movies (which is fitting since he notably was Jared Leto's body double as the Joker in Birds of Prey).

Goth already gave fans a preview of what to expect with his glittery guitar-driven single, "Can't Get You Out Of My Head," and now PAPER asked him to walk us through every last spine-chilling detail on the album. Read on as Goth breaks down each track off The Great Awakening and stream it, below.

"Maybe It's a Fantasy"

As soon as I wrote this song I knew I wanted it to be the opening of this album. To me it really felt like a proper taste of what you are about to hear throughout this project. The song plays on the perspective of an individual who has lost all hope for their world and is cast out to live life somewhere new. It is about feeling lost and empty in a place you feel confined to, only to realize that there is still hope hidden away somewhere you've yet to find.

"Come Closer to Me"

This track is probably one of the heaviest on the album I feel. In a world driven by the desire for money and fame this track speaks to the darker side that. It's essentially about being lured into a trap by those in power. I took a lot of inspiration from bands like Nirvana, Marilyn Manson, and Linkin Park in this one as you may hear through the heavy instrumentals and distorted vocals.

"Can't Get You Out of My Head"

It feels almost like a track off my old record 'Demons' but with a new kind of air to it. I wanted the listener to feel as if they are riding a rollercoaster of emotion, pulling them back and forth between distorted choruses and stripped down acoustic verses.

When I wrote this track, I wanted it to sound like a vampiric love song. It's about loving someone enough to die and sacrifice everything for them. There's not a whole lot going on instrumentally because I wanted the vocals to carry the track for the most part.

I think this track has been compared as being the most 'Tim Burton-esque' on the album. I wanted it to sound as if I was preaching towards a little choir of chanting people throughout the song. At its core it begs the question of why we "follow" or look up to those that we do. I think now more than ever this is an issue we need to confront within ourselves.

I love audio skits in any album. I think in most cases having that extra 'scene' can really add to the experience and make it a little more cinematic. I wanted this clip to serve as a type of intermission leading into the more culty side of the album.

I wanted this track to sound a little more chaotic. Being heavily influenced by elements of the church and religion in general throughout my life, I tried to implement some of those themes. I imagine it being almost like the soundtrack to a scene in which one is struggling to take power over their creator.

This is what I would call an 808 hymn. Drawing inspiration from the church once again this is essentially a song of worship toward the 'Holy Lady' which in latin translates to "Sanctus Dominae'. One could call this a love song.

This track felt like a revival of my own self belief, the realization of my power to change things in my world and within myself. I aimed to produce this track in a way that felt as if you are floating in some sort of self purgatory searching for a way out. I definitely tried to draw some inspiration from Radiohead on this one.

This final song on the album felt like the best way to close being that it is much different than the rest of the album. It sounds like what I imagine the ending to a dark Disney horror film would sound like. My hope is that by the end it fully consumes the listener and offers them an ember of hope.

johnny goth · The Great Awakening
Related Articles Around the Web