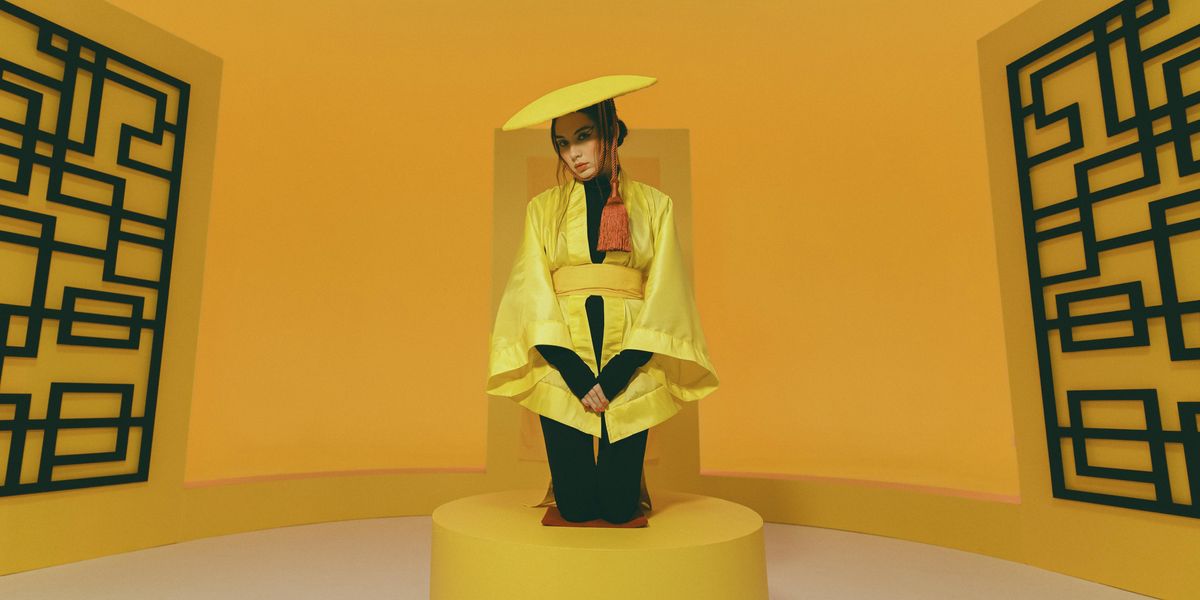 "Tear me apart, just tear me apart," demands Asian-Australian singer-songwriter Jaguar Jonze on her new single, "CURLED IN" — a grizzly, rock-pop track lifted off her forthcoming Antihero EP, out April 16th. Real name Deena Lynch, the rising artist's latest song unfurls her own experiences with masochistic love, while ultimately asserting her position of power above it all.

This authority will infiltrate Antihero, as Jonze assumes the role of a "dominant avenger," which is shown on previously released singles "Murder" and "Deadalive." Explosive and cinematic, her music is a fiery collision of grinding guitars and earthy, earnest vocals that wields romance into the most violent, dramatic narratives. Through it all, of course, is an understanding of global appeal; her brooding cover of Britney Spears' "Toxic" is proof.

Much like all of Jonze's work, the "CURLED IN" music video pulls inspiration from the greatest auteurs. She specifically cites Japanese director Akira Kurosawa and Ghost in the Shell as key references, building out a stunning cyberpunk fantasy that dives deep into her own identity and background. And she's incredibly hands-on, having co-directed the powerful "CURLED IN" visual and led all its art direction, as well — naturally, she plays the heroine.

Below, PAPER asked Jonze to outline her five favorite Asian films, from 1997's Princess Mononoke to 2009's Mother. "To be honest, I struggled with not filling this list with Miyazaki films," she says of the task.

I fell in love with this movie when I was a child because I drew on the spirit and strength of the heroine to fight through my obstacles. Now, as an adult, I appreciate the movie for its ability to question our choices as a society in regards to the environment, think deeper about spirituality and animism, as well as allow ourselves a moment to escape into a beautifully crafted fantasy. To be honest, I struggled with not filling this list with Miyazaki films.

I still watch Akira in disbelief that it was created before I was born and without any CGI effects. This is a technical, beautiful piece of art that I often draw inspiration from — both in the beauty of careful craftsmanship and creativity. It is also a fast-paced cyberpunk action film that leaves you thinking about the dangers of atomic power and the repercussions of war.

People don't realize how much '70s Japanese films influence Tarantino's works and I think it becomes a lot more obvious once you watch Lady Snowblood. The vendetta story is a must-see and there's a reason why it is a cult Asian film classic. If following cult trends isn't your thing, then the cinematography is gorgeous. Basically, if you're a Kill Bill fan then it's best to appreciate the original inspiration.

I don't think you can talk about Asian cinema without a special mention to Rashomon by Akira Kurosawa. Beyond its significance of introducing the Western world to Japanese cinema, Kurosawa's storytelling and cinematic aesthetic is something to be marveled at. The film will have you thinking about humanity's relationship with truth as every shot and every sequence will have you questioning each character's reality.

Most people will know Bong Joon Ho from his Oscar winning film, Parasite, but one of his first films, Mother, is a triumph that everyone should see. As with any Bong Joon Ho film there's always that twist or tonal shift, but I love it for its exploration of the extent of a mother's love. It's both a beautiful and tragic story.

Stream "CURLED IN" by Jaguar Jonze, below.