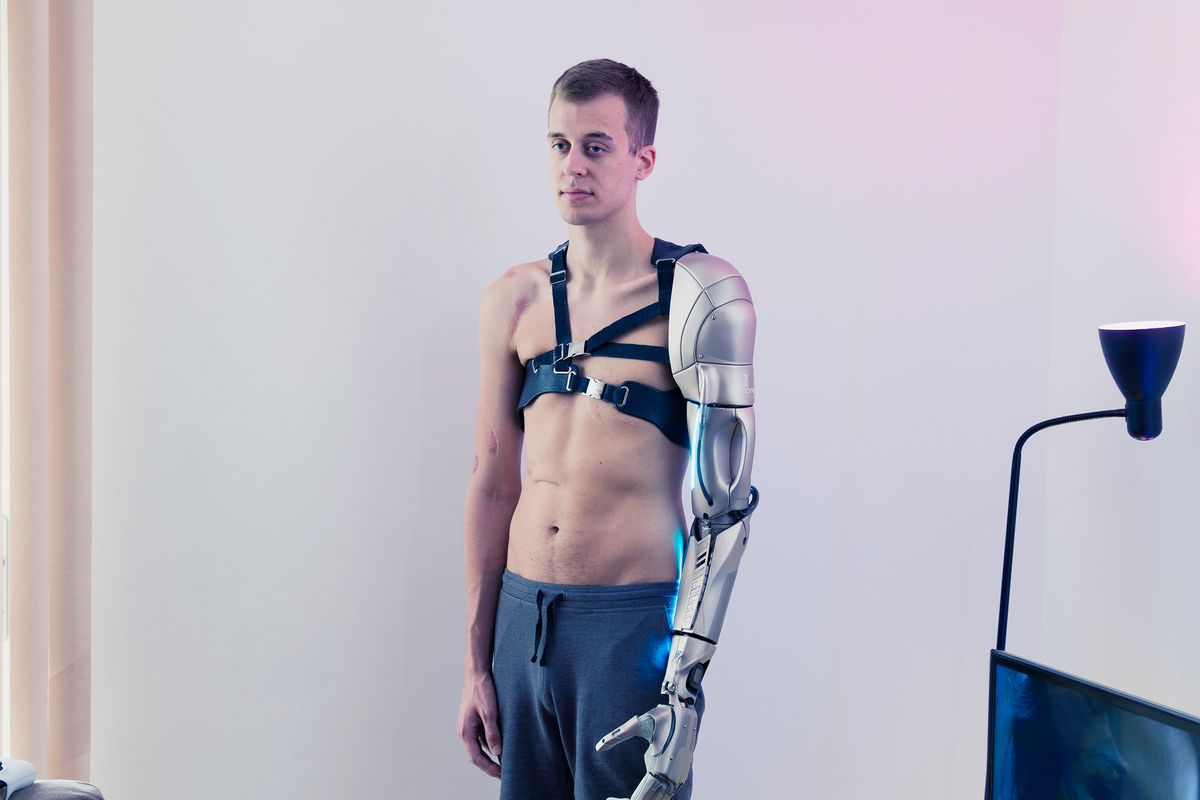 From Planet of the Apes' cryo-preserved astronauts to Blade Runner's replicants to Ex Machina's Machiavellian cyborgs, people have always been intrigued by messing around with the rules that govern human existence. Namely: age, death, time, consciousness and the vulnerabilities of our ridiculous little flesh prisons.

Transhumanism or "biohacking," as efforts to transcend human biology are known, has been explored at lengths on screen. Offscreen however, there's a very real, little-known but passionate community attempting to make these storylines a reality.

Related | Would You Sell Your Face to a Robot?

Over the last five years, London-based photographer David Vintiner and art director Gemma Fletcher have been documenting the subculture of transhumanists across Europe, Russia and the United States. Their photobook I Want To Believe, due out this spring, explores these enthusiasts' achievements and motivations.

"These ideas have long lived on the pages of comic books and sci-fi novels, the movement — now a reality — is starting to disrupt industries and individuals in meaningful ways," says Fletcher.

The pair first decided to document transhumanism, after discovering a meet-up in the basement of a prestigious London university, where transhumanists would gather to debate the future. After publishing a short initial series on transhumanism, they were blown away by the interest in the project.

"Everyone we met has their own personal ideologies about what it means to be a futurist or transhumanist and unpicking these motives and how they connect to others in the wider movement has been really fascinating," says Fletcher.

I Want To Believe divides the transhumanist world into three communities. First, there's those trying to create or become real life cyborgs, like British professor Kevin Warwick, who calls himself the world's first cyborg. By neuro-surgically implanting a device into his left arm, Warwick has linked his nervous system to a robotic hand that he controls using brain signals from anywhere in the world. Or the Spanish avant-garde dancer, choreographer and "cyborg activist" Moon Ribas, who has implanted sensors in her feet linked to seismographs, allowing her to perceive earthquakes happening anywhere in the world. Similarly to Ribas, Manel Muñoz has a biometric ear implant that detects changes in atmospheric pressure, that allow him to feel the arrival of everything from rain to a tornado. Ribas co-founded the organization Cyborg Arts with Neil Harbisson, who was born with grayscale color blindness, but can hear colors thanks to an antenna implanted in his skull which translates shades into sounds by detecting the lights' hues. He can also connect to the internet and other devices using his antenna, which is Bluetooth enabled.

"These individuals believe that if we create new senses we can experience reality in a deeper, more meaningful and intuitive way," Fletcher says. Ribas, for example, wanted to become a cyborg to serve her practice as a dancer and experience movement in new ways.

Then there's the people who see robots as humanity's future, such as the team behind Sophia, the world's first robot citizen and an ambassador for the United Nations. These folks are less concerned with augmenting our abilities, and more with seeing where robotic members of society can take culture. Ai-Da, the first robot artist, opened her first gallery exhibition last year. A manufacturer of made-to-order anthropomorphic robots, copied from photographs or portraits, like one resembling Russian poet A.S. Pushkin capable of reciting poetry.

Finally, there's the futurists, who want to live forever. This group includes Dr. Aubrey de Grey, a British author and biomedical researcher, who believes that aging is simply a disease to be cured. He thinks the human lifespan can be extended 20 to 500 years longer with an automobile-like model of stem cell-assisted repair and regeneration for our organs and tissue. Dr. Max More and Natasha Vita-More, the leaders of the world's largest cryonics organization, co-wrote the Transhuman Manifesto, and have been cryogenically storing bodies at their Alcor Life Extension Foundation in Scottsdale, Arizona since 1982, in the hopes that future technology will be able to revive them one day. Its "members" (not considered dead but in an "in-between" state) pay up to $2,000 to reserve a spot in one of their tanks of liquid nitrogen, kept at negative 320 degrees Fahrenheit.

Transhumanism has been around in theory since the early 20th century, but the democratization of technology has put developments on a new pace. Those in the community don't see what they're doing as different, from developments in medical technology, like bionic arms, eyes and even penises, according to Fletcher. James Young, a double amputee worked with Japanese gaming company Konami to develop his own "bionic arm," modeled on the lead character, called Snake, from the game Metal Gear Solid. It includes his own drone, lighting which he can change to suit his mood, a laser, a torch, USB port to charge his phone, a sport watch and a bionic hand which will respond to messages sent by his muscles.

She recognizes the complex questions raised by transhumanism. "While we love the efficiency and entertainment technology provides, can we embrace a future where it goes beyond our environment and enters our minds and bodies? Could we reach a point where we are gifting friends and family cognitive implants and new senses? And, most importantly, will this evolution divide or unite us?... We are now able to create and design humans, but do humans have the foresight to do it in the right way?"

The team behind I Want To Believe think these questions need to be asked regardless of what the answers might be.

"The outside perception is that this is a group of eccentric bedroom hackers, when actually they are at the forefront of a movement reimagining what it is to be human in a truly profound way," Fletcher says. "This is not something a few individuals are involved in. This is a huge global industry and the profile of transhumans are as diverse as its application, from artists and CEOs to academics and bedroom hackers… If you're writing off transhumanism – you're going to get left behind."

Contribute to the I Want To Believe: An Exploration of Transhumanism Kickstarter to help with production costs here.