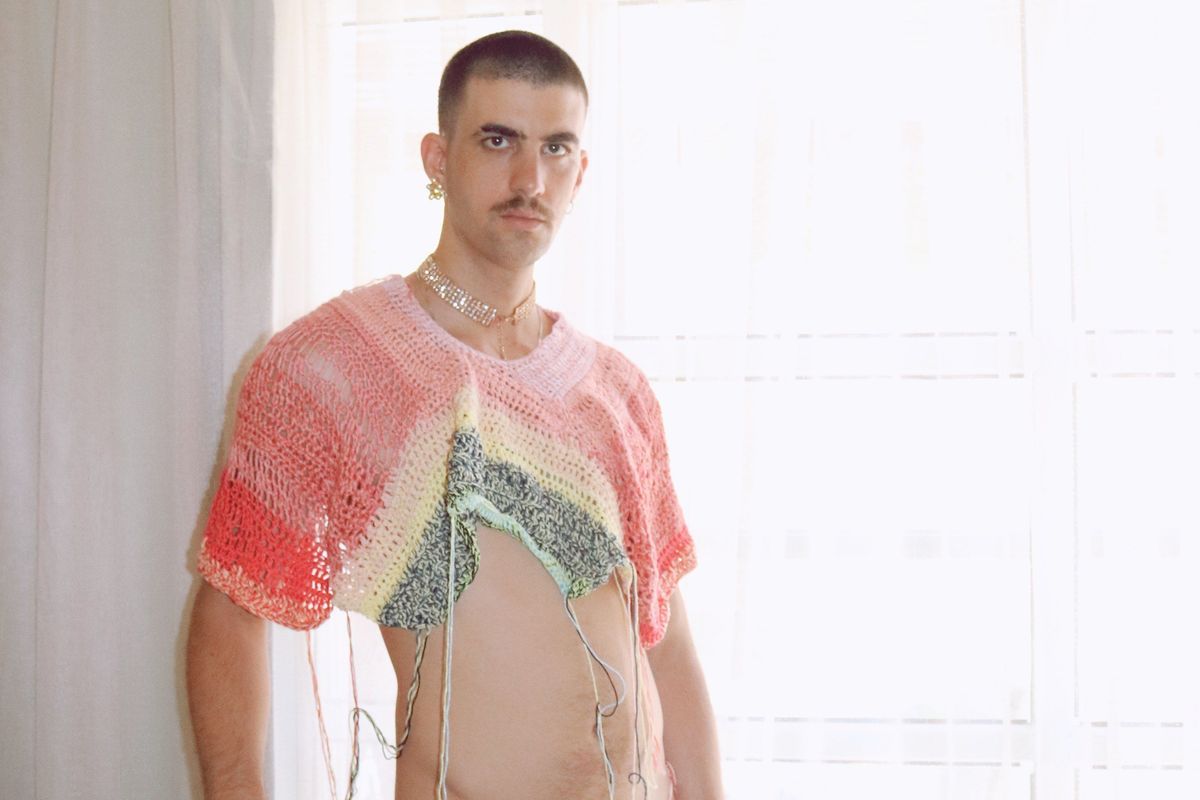 If Rihanna's endless success with Savage X Fenty is any indicator, the lingerie market has become a space ripe with profitability and innovation — and that doesn't exclude lingerie for male bodies or nonbinary individuals, either.

A category pressured by societal understandings of masculinity, male underwear is largely limited to a boring trio of boxers, boxer briefs and briefs — a scale that, depending on who you're talking to, often gets deemed more "feminine" with each tighter style. But that's all such a lazy limitation, overlooking the potentials of creating intimate fashion that disregards gender altogether.

For Ravid Haken, the designer/ artist behind HKN, lingerie opens up a world of possibilities for them to bridge their queerness and technical crafting background. "HKN designs have no gender guidelines, no limits of color, texture, glitter and amount of Swarovski crystals or pearls," says Haken, who's lived in Tel-Aviv for a decade. "I love playing with what's considered masculine and feminine, and mixing it all the way."

Haken's crocheted underwear not only disrupts a patriarchal society — especially in the Mediterranean — but it looks back on a rich, "ancient" history of the tradition. "As far as we know, humans have been using crochet undergarments for more than two millenniums," they say, using this background to hand-knit products that form "a new hybrid" of classic men's and women's lingerie silhouettes.

The result is a range of pieces Haken personally models on their Instagram. Rainbow-colored, knit thongs are decorated on the sides with beads that flaunt the HKN brand name; a knit jockstrap features delicate beads at the hips with rows of fringe and eclectic gemstones. Haken has also created matching knit tops with large, open spaces in-between the yarn to show off their skin.

"Every piece is customized, material and color-wise, detailed with pearls and crystals," Haken says of their designs, available to order online. "It is not very common celebrating the male body in that way: unthreatening and non-aggressively, with soft colors and soft textiles."

Below, PAPER learns more about Haken's education, designing under COVID-19 and what's next for HKN.

How has living in Tel-Aviv influenced your design approach?

For the past 10 years I have lived in Tel-Aviv, and last march I moved back to the town I grew up in, due to COVID-19. It's a small town in the Israeli Southern District. As a born and raised Israeli gay nonbinary individual, it wasn't easy growing up in a country that knows so much war. Hyper-masculinity is common because of cultures merging — aggressively sometimes — and the fact most citizens are obligated to serve the army. I could sense the pressure of performing masculinity since kindergarten, and it followed me through high school and straight to my military service.

Alongside the pressure of performing masculinity and considering my background as half-Tunisian, half-Polish (with holocaust survivor grandparents), staying in the norm was and is clearly a guiding value that I refuse to follow. Now, what used to be a clashing point with my sexuality and gender, has become a harmonious state which is my queerness.

Where did your relationship with fashion begin?

Fashion — and our appearance throughout history — has always intrigued me. As a child, I was fascinated by the descriptions of great beauties in stories and by images of ancient queens and royalty — I still am. It's all about fierce women, great textiles and amazing jewelry. This is the power of visibility. In the mid-'90s, Clueless came out and my mission to match every outfit was imposed. I was about 10 years old when I started to sketch these cute big-headed models and their sweet ditzy outfits. My mom used to tell me I should watch the fish in our aquarium for dress inspiration. Fashion is a form of art, a medium of self-expression and it's been surrounding us in countless variations for thousands of years.

What's your background with crafting?

My first encounter with crafts and design was back in 2010 when I was studying gold-crafting in Jaffa. As soon as I finished the short studies, I came to realize that limiting creativity to one medium does not feel right to me. My final project was designing and producing a handmade, dyed and printed T-shirt collection, which was my starting point as a textile designer and my first encounter with fabric and pigments as tools of expression. It was then when my passion for creating through textile, yarns and threads sparked.

Right after my art direction and graphic design studies ended, I began my bachelor's degree of textile design in Shenkar College of Engineering, Design and Art, where I mastered in knitting. During the studies, I created garments and wearable constellations, using a variety of crafts and techniques such as crochet, industrial and manual knitting, embroidery and silk printing. Several months after graduating, I had an inspiring and very educating internship in the MUSLIN Brothers studio, and soon after I worked in the Iota-soft living studio for crochet home decor. In 2019, I realized it was time for my own brand to come out to the world and HKN was born.

How has 2020 — a year of unprecedented hurdles — impacted your brand?

2020 so far is very different, both in marketing and in production. COVID-19 has changed the game rules, and in this new reality I feel like I can create more freely and get involved in new fields that have awakened my curiosity such as lingerie for men. COVID-19 lockdowns allowed me to experiment through self-reflection. Sales were off the table in a way, and I could have fun with art, yarns and being playful using the skills I have acquired.

What interests you specifically about crochet?

Crochet is ancient. To me, the most fascinating archetype of early crochet is a pair of socks which date back to 400 AD, created by Coptic Christians in Egypt in the 4th century AD. As far as we know, humans have been using crochet undergarments for more than two millenniums. Crochet and knitting are a way of life to me. I'm making clothes in this medium intuitively, and actually what starts a new design is my will to have it, wear it and celebrate myself with it. I bring this state of mind to my crochet lingerie line, Pinkish, and to the wrestlers' thongs especially, sharing it with the world.

How do you think you're subverting the lingerie market?

Lingerie for men is an existing market, also knitted and crochet underwear for men, but HKN is making a collision of these amazing party ingredients: taking the male body, fine crochet, and the luxury of classic lingerie made for women and forming a new hybrid. Every piece is customized, material and color-wise, detailed with pearls and crystals. It is not very common celebrating the male body in that way: unthreatening and non-aggressively, with soft colors and soft textiles. The Pinkish lingerie line is breaking the roles and ideas of what "masculine" is.

Do your designs stem from a desire to transform masculine archetypes?

Toxic masculinity is being discussed widely in recent years and social media is a great platform doing so. Most of society and Mediterranean cultures in particular are patriarchal and seem to elevate aggressive behavior and abolish "femmeing" characters. I use my textile, and my bond with fashion and photography to stand up against these archaic voices.

How do you see your brand developing into the future?

My vision for HKN is to establish it as a house of fashion, textile and art. The future is multidisciplinary, and I want to create and be active in all of those fields. I want to keep releasing capsule collections of one-of-a-kind pieces and as much as possible commercial collections and keep enriching the variety of made-to-order pieces. I'm working on a new exhibition which will present extravagant, very detailed pieces rich with materials influenced by a mix of Mediterranean and the beautiful 17th-18th century Punjab aesthetics — the heart of India's Sikh community.

Are there any other lingerie brands that inspire you?

I have always loved lingerie, and what RiRi did with it was so cool and revolutionary. Savage X Fenty has expanded beyond the very limited beauty ideals that were so common up until recent years, and adapted lingerie to the amazing variety of shape, size and color of the human body. I just had to do my queer, crochet HKN version.