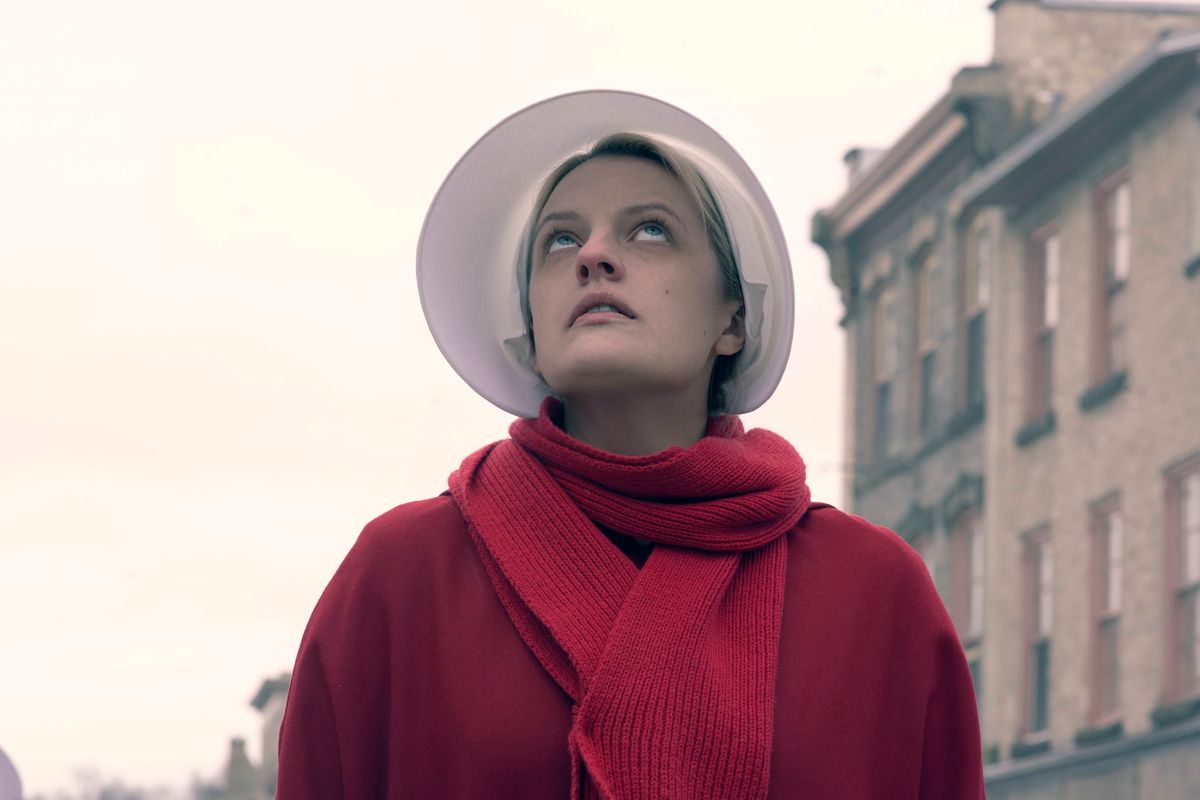 How do you design clothes for a dystopia? Specifically a dystopia where women's bodies are policed and hidden from view? That's the happy dilemma of the Handmaid's Tale costume department, which over the course of two seasons spent adapting Margaret Atwood's classic novel into an acclaimed Hulu series has produced some of the most memorable TV fashion moments of all time.

Okay, "fashion" is the wrong word. The striking blood red robes worn by Offred and her fellow handmaids have quickly become embedded in not just popular culture, but also our daily political lives — the cruel subjugation of women in Gilead is now viewed by many as a stylized prediction, rather than fictional vision, of anti-choice America. As such, the costume designed to be worn by Elisabeth Moss has become everyday protest wear for activists picketing outside of courtrooms and government chambers.

In season three, which streams from today, you'll see uniforms not just of oppression but also resistance. A revolution is coming, and we'd better hope for one in real life, too.

PAPER caught up with Natalie Bronfman, who has been with the show since its inception and recently took over from former lead designer Ane Crabtree, to talk more about costuming the resistance.

You have such a dream job. What's your background, and how did you get involved with the show in the first place?

Well, I was born in Germany and I ended up studying costume and set design in New York City, at Parsons. Then I left to attend L'Accademia di Costume e Moda in Rome for six years, where I learned about costume and set design. So I originally come from the world of theater and opera, but it's really hard to make a living on that salary. But with that extra training, I really learned how to do every from the ground up, from making shoes to hats to being a tailor, knowing how to dye clothing. All of it. And this was sort of the perfect vehicle for all that, because we do those things on set.

There's certainly a level of detail to the clothes.

Pretty much everything that we put on camera, including some of the modern clothing, is built in-house.

Is that unusual in the industry?

It's very unusual, but I'm surrounded by a really amazing team with very, very many skills — most of them will come from the theater world.

Related | Meet the Woman Behind Those Crazy 'Masked Singer' Costumes

It's hard to think of a TV show now where costumes are more important, or have made a bigger cultural impact.

Yeah. It's very powerful. When I first started working on the show, I actually didn't realize the book had been written so long ago.

And yet, as we're all tired of hearing, it's so relevant to today.

Incredibly relevant. I think its relevance has always been there, but I think now the relevance is definitely in first world countries, and that what's so shocking to us.

You've been involved since season one. How did your team start out designing costumes for the difficult subject matter on this show?

Well, we started off with psychology, of where the people are in their lives. So, the past and the present and what will be their future. And we were also drawn to the psychology of color: passion, anger, life, blood, all that. And color also because designates where you are in the society — what color you wear.

That strikes me actually as difficult, because you're not designing for characters, you're designing essentially these uniforms that delineate people's positions. Many characters in this show, they essentially look like other people.

They do and don't. All of the characters, at a glance, they all look like an army because they all have the same sea of color, but start to dwell on their actual character, and they all have small things are that different from each other. Like for example, the wives, just this year, I tried very much to work with shapes. Like Serena, to look at the psychology of her character arch for this season. Specifically with the shapes of where she was in her mind, whether they were softer shapes or harder shapes. Last year, we explored a lot of Serena being a mother. This year, we're exploring Serena having lost the baby and where to go from there.

And then June and Janine, they are all very individual, even though they are all wearing the exact same color. Texture, little things that are a little bit different. Shape, as well. With the handmaids, mostly their sweaters, we can play with their characters a little bit, changing the shape.

The show is set in the future, but at the same time, it's very retrograde and medieval. Were you thinking about that in terms of clothes?

Well, the scaling of this show is almost like a throwback to what men thought women should be and wear. For example, with the wives, they're prim and they're proper and they're there to serve you and to make you make sure you're happy and serve you a drink when you get home and not ask too many questions. So there's some styling that's mid-century modern. There's this archetype of what the wife should be.

That housewife-y feeling is quite creepy.

A housewife that always looks impeccable. There's a cross between let's say, an American television world from June Cleaver to Jackie Onassis when she was married to Kennedy, when she was the first wife, the first lady. That person that is just always put together, always beautiful, always glamorous, always just untouchable.

The clothes also take inspiration from religious comments in the way that they're so modest. How do you go about that without offending anybody?

This season we actually do explore some veiling, which has come out already on the internet, it went viral when we were shooting in Washington. In the show we end up in Washington, which is a little more pious than Gilead. It's something they are aspiring to be eventually, except there, all women are veiled. And that is a daunting task, to not offend anyone, or culturally appropriate anything. So, essentially what I did is what I tried to do is take something from all religions, and integrate it into their society.

When you look at just the handmaids, the hair is covered, because the hair is actually very sensual — across the board, many religions associate hair with seuxality. With the wives, the hair is always tied up in a bun because again, the hair is sensual, but they're allowed to show it. Just those little things.

It must be tricky designing these outfits, which have bonnets, hoods, and veils, and allow for the actresses to have a full range of expression.

Yes. Well, for example, with some of the veiling that we have, it sits below the nose — because I actually find the nose to be very expressive. The flaring of nostrils. You could understand somebody's expression almost exactly just by looking at what their nose is doing. So you see the face, but you don't the face, and that actually, itself, is quite sensual. Seeing the chin, or the line of the chin, or just the lips.

Designing and crafting all these costumes from scratch seems like a monumental task.

Oh, it is. We start with all the capes — all the women that have capes, and the children. Everything is hand dyed to specifications. We basically cut them all here, then put them all together. Most of our fabric is dyed, or sourced from around the world really.

Do you ever cut corners? A while ago, the Game of Thrones costume story went viral where it turned out that they were cutting up IKEA rugs for fur.

Actually, honestly, not really. I can't really think of anything. We don't generally purchase things, except there was one particular scene where we have quite a few babies on camera. And I went looking for a quilted thick cotton blanket. We ended up going Zara to purchase these blankets. We ended up embroidering them on the outside.

It must be strange then to see people wear replicas of these incredibly detailed handmade handmaid's costumes in public, at protests and things.

Yes. Especially sometimes on Halloween, I notice popping up on Instagram and a few other social media sites, men were dressing up in handmaid fashion. Like, are you aware of the significance? It's really odd.

Another Halloween costume that went viral was the sexy version of the handmaid robe, worn by women. Which, I don't know, is actually kind of interesting because it slightly misses the point, but it also accidentally makes a statement, maybe without realizing it.

Yea. I have a huge qualm with whoever decided to do that because in theory, you are promoting the abuse of women. It's one thing to dress as a prostitute for Halloween, but it's another to dress as a sexual slave. I just find it such an odd thing. I had a hard time with that. In our staff, we all were very offended and upset by it. I think someone pulled the trigger too quickly on manufacturing them, without actually thinking it through.

What can we expect from the costumes in this new season?

There's going to be some quite interesting character arcs. I think what we are showing this year is: how much can the human psyche take before you break, and how far will let yourself be broken? It's really quite — it's going to be very intense this season, much more than so than the second season.

And I think it comes across in the costumes. We do a little bit more modern clothing this year, more than we did last year, because we're exploring the world of Canada, where refugees go, and through those characters who are now wearing modern clothing, I think it shows the psychology of where the people are at in terms of healing.