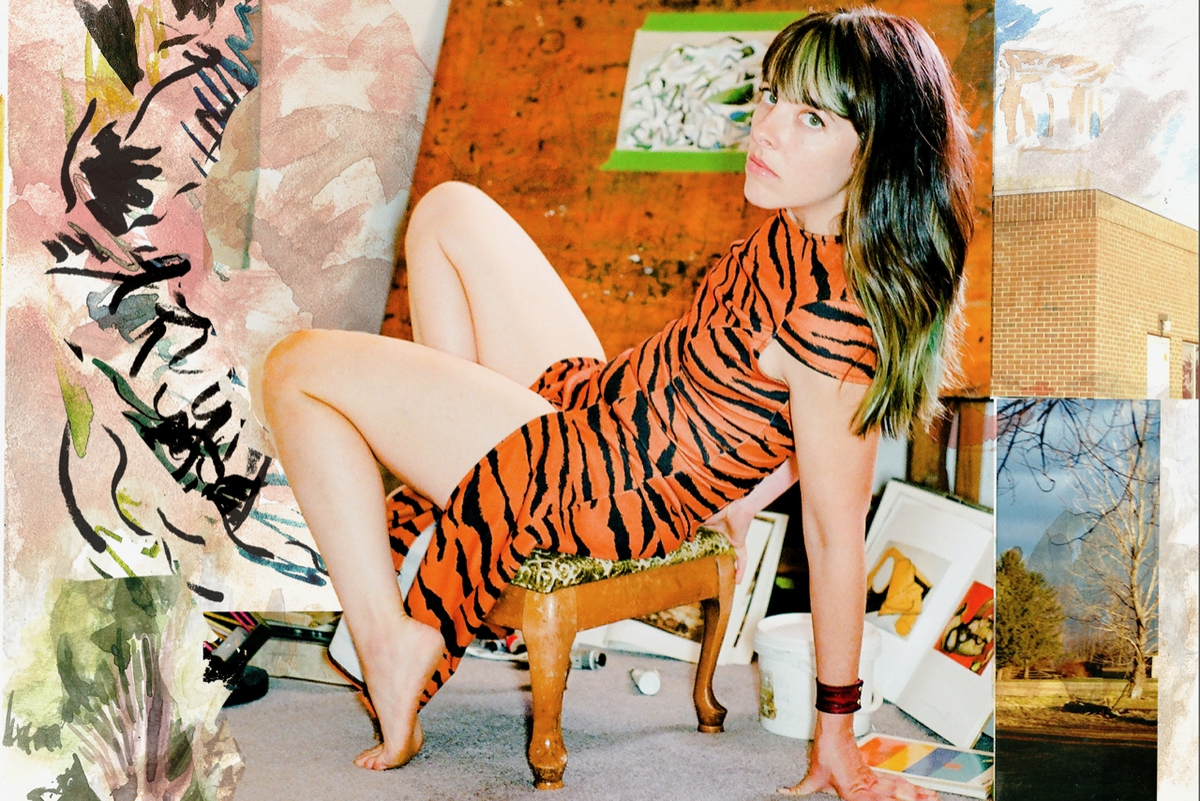 No one writes like Frances Quinlan. The Hop Along frontwoman, who has a painting degree from MICA and recently released her debut solo album Likewise alongside a gallery show in New York, is an expert of flash fiction. Her songs conjure lucid scenes that are faithful to the absurdity and richness of life. Images burst into view then dissolve quickly, before her characters reach any kind of conclusion.

Take her song, "Piltdown Man," named after the 1912 anthropological hoax in which a scientist falsified a humanoid skeleton out of orangutan bones and successfully passed it off for 40 years as "the missing link" between ape and man. "Why would he do such a thing?" Quinlan asks. A few beats later, she answers herself: "Such a stupid question." But instead commenting on history or the human ego, the song softens out into a strange little story about a dog, a tent and getting kicked out of mom's house at 6AM. The connection between the song's two pieces is mysterious and arresting.

"I'm not really interested in the songs translating as confessionals. I do think there's confessions in there. Certainly they have to feel true to me and they go to personal places," Quinlan says. "We write to form connections, but there's fundamentally a disconnect between the experience of writing, and reading finished writing."

This marks a difference between Quinlan and many of her peers, who've found brilliance in the model of rock song-as-confessional. Despite her song's non-diaristic nature, Quinlan does often find sparks for songs in her journals, which record her day-to-day life, random intrigues and observations. (She came across the Piltdown Man in a novel years ago: the song was inspired by a rediscovered journal note).

Frances Quinlan on Instagram: “Sketched a couple of weeks ago, on the drive to Storm King with Pat🍂”

"My mom would read a lot of Grimm's stories… I loved Roald Dahl, Beatrix Potter," Qinlan explains. "I love the idea of being able to tell a creative, vibrant scene the way that short stories so often do. At MICA I was super into the idea of narrative painting. I made these large-scale narrative paintings… these phony parables, parables with no beginning or end." She describes one that sounds very much like a Hop Along song: "It was all these anteaters fighting over a beehive, and just decimating it, with all these bees trying to escape as the anteaters take the honeycomb for themselves." I would like to see the visualization of "Went to LA," on which Quinlan sings, "The cannibal dragged his son into the kitchen/ Outside, the deaf man fled the barn abandoning every father's image."

Her storytelling style comes naturally, but Quinlan also sees value in open-endedness. Her fans often come up with elaborate interpretations of her songs, like a public defender who cherished Hop Along's "Somewhere, A Judge" as an anthem for her profession. On one occasion, a fan begged her to tell him a song's "real" meaning. "I told him and he was so crestfallen. He was so bummed, because he thought it meant his interpretation was wrong, because it conflicted with mine."

Likewise has all the pleasure of looking at a gallery of enigmatic paintings — paintings that also slap really hard. At the core of every Frances Quinlan creation is her ragged scream. It's a singular instrument, often shifting pitch over the course of a single word, makes her strange scenes feel familiar and essential. In between the absurdism, some personal themes emerge: an ambivalence about selfhood ("I went to LA, searching for my own face," she sings, later wishing she hadn't: "Oh, the humiliation of having been perfectly understood"), relationships that shrink you, the search for non-diminishing love.

Quinlan's voice and songwriting define her band, and at plenty of points, Likewise sounds like stripped down Hop Along (several songs are Hop Along loosies that needed a home, and there's a Quinlan solo song on each of the band's records). But she wanted a blank slate, outside the stakes and logistics of a Hop Along record. "It's not that I felt I was getting stuck, I just wanted to see what the possibilities were" she explains. "I just wanted to get into the studio and be as sloppy as necessary to experiment and fail." Working solo, with only she found herself gravitating towards synths — "they just make sense to me because it's so immediate, so forgiving, there's so much room to play — adding a sometimes disco-reminiscent eccentricity to Hop Along's sturdy, textural analogue rock.

"I had fantasies when I was little of being a big pop star. I loved Mariah Carey, Jewel, Fiona Apple," Quinlan laughs. She's not a pop idol, but Quinlan did end upbecoming an indie rock institution: with labelmates like Conor Oberst and Big Thief on Saddle Creek and spots on major festival line-ups. If you've ever seen her live, "star" is an apt label.

Quinlan has spent a long time getting good at what she does. Hop Along started as the 33-year-old's high school project, Hop Along, Queen Ansleis, which released its first demo in 2004. "We've been a band long enough for other bands to have formed and broken up, formed and blown up, broken up, formed," she laughs. "In the last couple years, we've come to steady even keel."

Frances Quinlan on Instagram: “This initially was a screenprint pulled from a sketch I made on a drive through the south in September 2016. We were on tour with Built to…”

"You have to have a healthy amount of delusion just to try to be a musician," Quinlan she says of that time. "Piltdown Man" came about because she was working on a song about growing up, and was struck by the fact of someone wanting to be famous and important that desperately. "I mean my heroes were like Michael Jackson and Jessica Rabbit. I wanted to be this impossible being."

As Quinlan's reached the kind of success that involves fanbase hungry for her solo experimentations, she holds her delusions close. "It's a dream. It's not reality. It's this idea that you have, and you're the one who has to feed it."