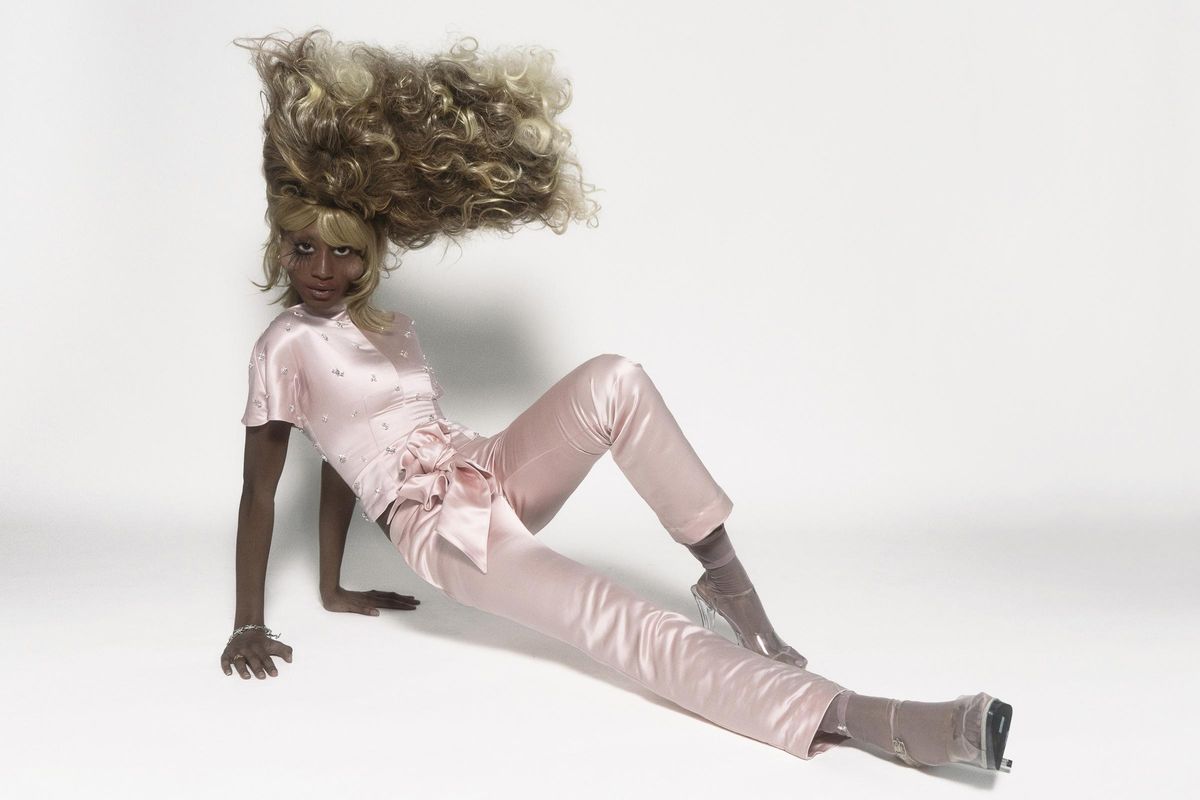 The timing of Sintra Martins' first-ever ready-to-wear collection could not be more fitting considering how, now more than ever, almost everyone is doing away with the rules that once governed how and when shows are released. (This past week alone we've seen designers show Spring 2021, Pre-Fall 2021 and Fall 2021.)

Martins' story begins in Los Angeles where she discovered her love for fashion by working in her high school's costume department. Afterward, she moved to New York City for college, studying literature and sociology at the Eugene Lang College of Liberal Arts at the New School.

"I think coming at it from the perspective of sociology, I was able to gain some insight into why [fashion] exists," she tells PAPER. "I was able to better understand why I like it so much and then I transferred to Parsons and I started gaining experience immediately."

What followed was a succession of internships including a year interning at Thom Browne and another at Wiederhoeft. While cutting her teeth at the aforementioned brands, Martins also began taking on custom orders to expand her skillset and establish her name.

Her work slowly began to garner attention. Early last year, she was contacted by stylist Cody Allen about creating a look for the cover of pop singer Slayyyter's debut album, Troubled Paradise. Martins did not have a studio space yet so she began crafting the Dorothy-inspired dress out of her tiny studio apartment, which took up the entire floor.

"The Slayyyter dress was huge for me," she says. "It was a really big moment just having the trust of someone in that way, where I was given freedom to design. Then we moved forward in a collaborative way with that project that was really transformative for me. I had never designed anything with so much freedom and so much trust."

Martins named her brand Saint Sintra, which was born loosely through the custom orders that came in around 2018. But it wasn't until she acquired a Brooklyn studio in September of 2020 that she truly felt her label become official. Today, she debuted her first full ready-to-wear collection for Fall 2021 which was inspired by a clown meme as a result of her obsession with pop culture. (Something tells me that Utica from Drag Race would fall head over heels for these looks.)

"I think throughout history, there's always been a jester character, whether it's the trickster a clown," she says. "I think the space culturally, the space for mocking, and the space for jesting, is a really interesting one to me. I really liked the idea that we can laugh about things that are difficult to talk about. I gravitated towards this idea of the clown in the circus as being this introduction to the Saint Sintra world, because it feels both personal and on a larger macroscopic scale, it feels very relatable culturally."

One major thread that runs through Martins' work is disrupting the idea of exclusivity. Even as a skilled designer, the core of her label is dismantling the notion that dressmaking and couture are inaccessible by bringing it to a younger audience. Her approach to accessibility extends not only to the clothing, but to the entire persona of the brand.

"I'm kind of approaching these collections as a form of entertainment," she says. "Some of the pieces are explicitly designed to be very wearable, very easily duplicated, very easily produced. But some of the more complicated pieces are really for entertainment and I want the clothes and the brand to be approachable, even if it's just consuming the media associated with it."

Revolving around the theme of "an acid trip to Barnum & Bailey's," some of the collection's anachronistic characters feature the Bow Queen, a ring-leader, and a Sol LeWitt-inspired Cheshire Cat. Composed of a combination of in-house deadstock fabrics, the collection includes garments from a sequin and crystal-embroidered polka-dot corset with a 3-feet-wide architectural bow on the back, a red silk and crystal candy cane striped tailcoat with puff sleeves and a white strapless minidress in white tulle with allover ruffle embroidery.