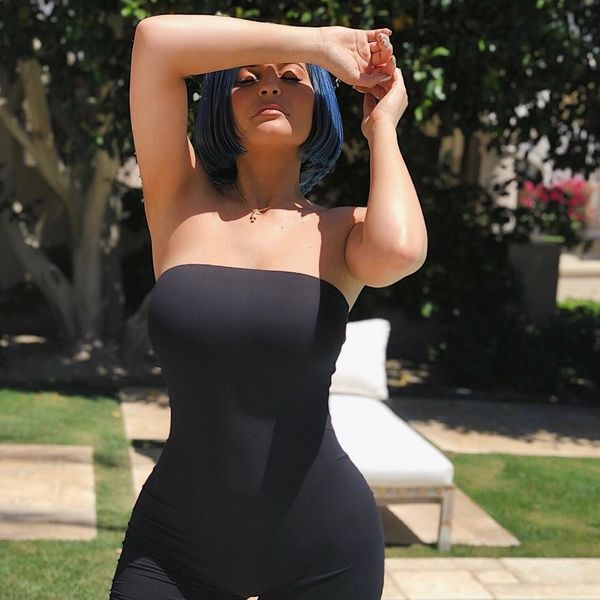 The Rise of Fashion Nova

CEO Richard Saghian gives a rare interview on his secrets to success.

Fashion Nova CEO Richard Saghian almost never does interviews, but frankly, he doesn't need to. Without the aid of traditional advertising, the fast fashion brand was the fourth most Googled fashion company last year, joining the ranks of luxury houses Gucci, Louis Vuitton and Chanel and cult hype favorite Supreme, but at a fraction of those brand's prices (and a whole lot more inventory).

Since launching his first brick and mortar store, the typically private Saghian has watched his company grow to a massive e-commerce platform hosting thousands of constantly changing styles with a social media presence that he estimates gets upwards of 3 to 4 billion impressions a month. The brand's Instagram alone has 11.7 million followers, with another million hitting the follow button every two months or so, Saghian says.

"All the knowledge I gained from having brick and mortar stores, I utilized for the website. Being able to listen firsthand to my customers gave me information of what women wanted, what was missing, and what was needed," Saghian said. "I realized early on, getting into the minds of my customers is what helped me grow. I don't think I would've been able to do it without all my retail experience from the brick and mortar days to the e-comm days."

Saghian, who was born in California, is Iranian-American and grew up helping out in the women's retail stores his father owned, learning the ropes up close and envisioning his own future in the industry. He opened his first Fashion Nova store at the Panorama Mall in California in 2006 (there are now five in the Los Angeles area), but it wasn't until Instagram exploded a few years later that the brand's reach began to grow exponentially. Once Saghian created an Instagram page to promote his store, promoting its best selling pieces on models, shoppers began tagging themselves wearing the line.

In fact, Instagram influencers, from the micro to the mega, are the bread and butter of Fashion Nova's marketing plan. Celebrities like Kylie Jenner, Amber Rose, Kourtney Kardashian and Nicki Minaj promote the line, with Saghian telling The Cut last year that a post from Kylie can result in $50,000 in sales. But beyond the paid influencers, there are hoards of customers who create their own carefully modeled Instagram shoots in the hopes of getting a clout (and follower) boost by being reposted on Fashion Nova's page.

"We have probably about a thousand DMs come in a day. Most of them are Nova Babes [Saghian's term for his customers] just saying, 'Hey, can we work together?'" the CEO told us, adding after a pause, "For models and influencers, being on our Instagram page is very powerful."

The appeal of a brand like Fashion Nova is more than the low pricing; it's the ability to feel ahead of a trend, or at the very least, right in the thick of it, before it fizzles out into irrelevancy. As Saghian acknowledged, "Everyone wants to be a celebrity on social media," and the hyper-fast turn around in styles (at super affordable prices, with most items under $50) allows customers to post new and updated outfits to their pages as frequently as wealthy celebrities who are gifted mountains of new clothes by brands trying to gain more visibility through Instagram themselves.

"If there's something trending last night at an awards show and we see that's a trend where the Nova Babe wants to go, we will immediately start creating designs in that category or fabric or type of look. We're not even focusing on the price point. We're always striving for the highest quality."

Saghian said his competitors' reluctance to work with as many manufacturers as he does — around 700 — is what holds them back. Super fast delivery is also part of the brand's plan to get its new styles into the hands and onto the Instagram feeds of customers as quickly as possible, with two-day shipping on all domestic orders and same-day Postmates and Uber Rush delivery for shoppers within a 40-mile radius of LA.

Fashion Nova's other edge? A co-sign from one of this year's biggest influencers of all — Cardi B herself. "Before she even started her musical career, she was shopping Fashion Nova," Saghian said. "I worked with her all the way back in 2014 or 2015. She was a personality and she had really great content on her social media. And we loved her style so we would always work with her." Now, the megastar rapper, who has worked Fashion Nova shoutouts into her lyrics more than once, is working on her own custom line to launch in October.

In many ways, Cardi is the perfect brand ambassador for a clothing line that features models with Coke-bottle figures and prints and styles that in the past would have been euphemistically deemed too "urban." All of Fashion Nova's elements combine to create a perfect magnetic force to capture a demographic typically underserved by the fashion industry. Lots of fast fashion retailers offer trend pieces at low prices with quick, convenient shipping. Fewer create items that are suited to body types not seen in typical fashion campaigns. "All our other competitors were always using the same models over and over," Saghian said. "We thought we could be a little different by celebrating body positivity and using curvier girls and the customers liked it."

The Kardashian Effect of the 2010s has transformed previously ostracized body types into a coveted form of physical couture. As much as Fashion Nova sells sexy styles born of black and brown communities, white girls wear Fashion Nova and listen to Cardi B, too. The mainstreamification of hip-hop culture in tandem with Instagram's aspirational omnipresence created the perfect market conditions for a brand like Fashion Nova to thrive.

All that's left is more. Having successfully disrupted the industry, Saghian has his sights set on world domination, expanding the brand to countries around the world. His ethos of listening to the customer has resulted in two new highly successful ventures: Fashion Nova Curve and Fashion Nova Menswear. The men's line, which Saghian says will be 500 styles of luxury streetwear to start, was quietly announced on the brand's sit with little promotion or fanfare. Saghian is counting on a combination of women "shopping for their men" plus male customers who aren't seeing affordable pricing at other stores to help the line take off, and his instincts appear to be spot on. Within 24 hours, 250,000 people signed up to be notified for the first drop.

The Curve line, which offers sizes from 1-3X, is unusual in that rather than creating a separate line of more shapeless looks to "flatter" a fuller figure the way many other brands do, Fashion Nova offers its regular (sexy, revealing, tight-fitting) clothes, just in bigger sizes. This was a direct response to customers messaging the brand.

"No plus size company would ever create something like this for their brands," Saghian said. "Yet we were bold enough to create it because we listened to our customer. They said, we want the same thing that you sell in XS, we just want it in 3X. And if you go to our Curve page you can see that's what we did."

Saghian asserts that the Curve line is the fastest growing plus size brand in the world, noting, "We democratize the fashion that we bring."