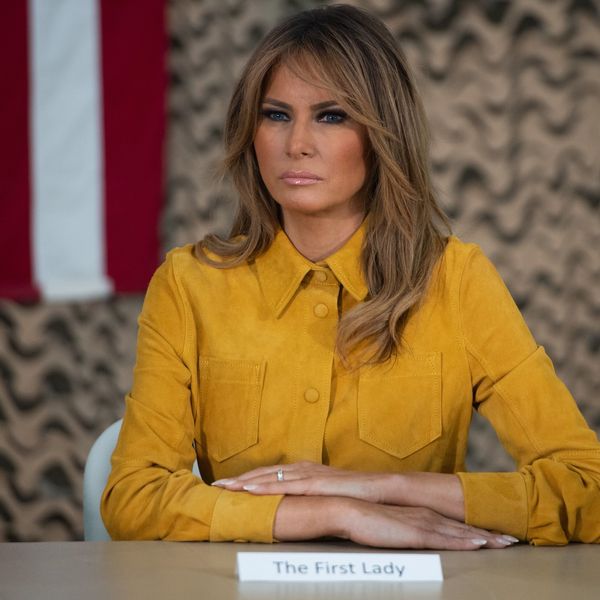 The 'Fake Melania' Conspiracy Is Back

This week the First Lady of the United States Melania Trump, along with President Donald Trump and their son Barron Trump, went on a trip to Lee County, Alabama to survey the damage from the EF4 tornado that hit last week. The footage and photos from the visit has led to the resurfacing of the body-double conspiracies that first came about in 2017.

Melania body-double truthers and jokesters are saying that the woman accompanying POTUS at the memorial for the 23 people killed by the Alabama tornadoes is not, in fact, Melania. This has, of course, prompted many tweets and memes where people point out how different Melania looks on this trip. One theory involves Melania's personal bodyguard, who bears some semblance to the first lady.

See the photos, footage, memes, and #FakeMelania receipts, below, and judge for yourself:

GUYS THAT IS NOT MELANIA pic.twitter.com/2kfo7QMU2x

Ok People! Let’s list all the ways #FakeMelania is different than #RealMelania. What the hell—it’s the weekend, we all deserve some downtime.

I previously thought the #fakeMelania thing was bullshit but I actually don't think that's her. lol https://t.co/KQNekZy0pi

It’s bizarre that they trot out #FakeMelania, thinking no one will notice. This one’s shorter + looks nothing like her!

Where’s the REAL one? pic.twitter.com/3DqtT02O65

Too weird for words. Are Melania and #FakeMelania even wearing the same ring? Do secret service agents generally wear such elaborate rings on the job? pic.twitter.com/Hm784nsBNn

Me falling deeper and deeper into this #FakeMelania conspiracy pic.twitter.com/eWQsY1vE2R

Everyone’s talking about #FakeMelania but I’m more interested in the context of this photo pic.twitter.com/ZbJCzS42kx

— 🌹i'm not superstitious but i am a little stitious (@katiedoesntknow) March 9, 2019