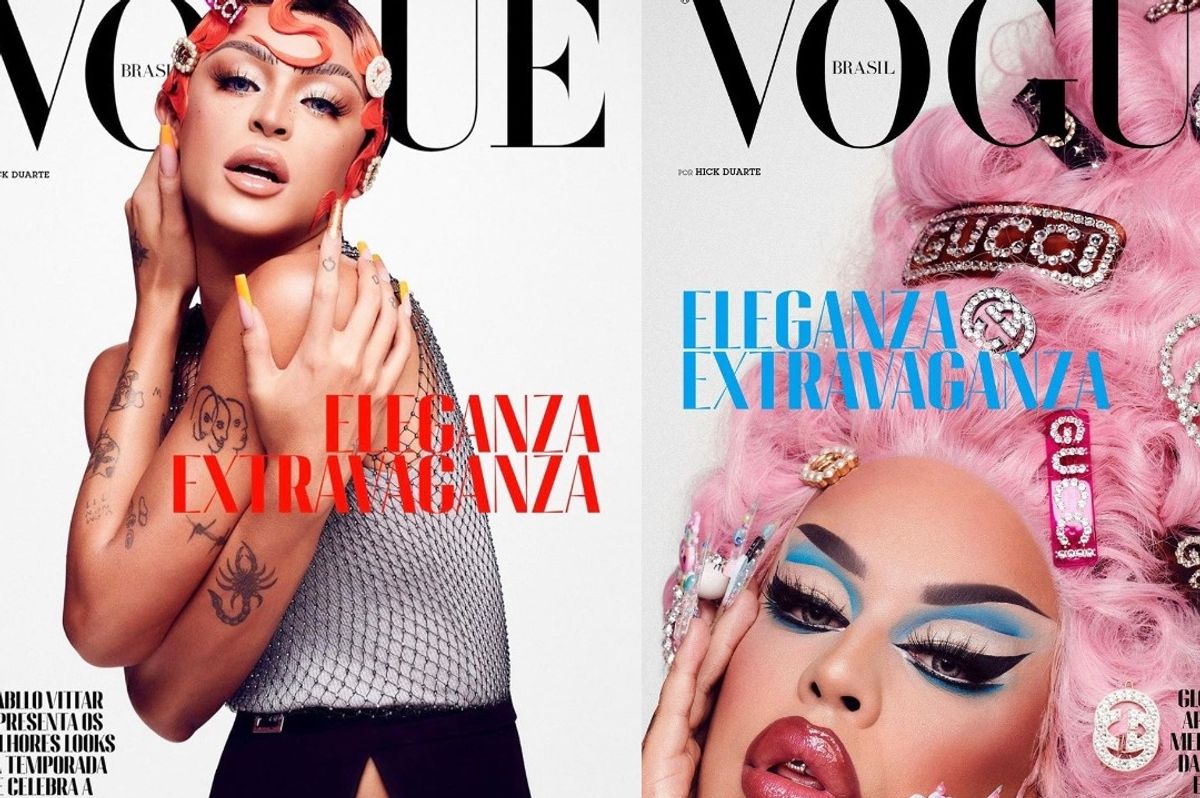 On September 28, Grammy nominee Pabllo Vittar and rapper Gloria Groove made herstory as what many online (myself included) believed to be the first drag queens to cover any Vogue publication. Appearing on dual covers of Vogue Brasil's October issue, titled "Eleganza Extravaganza," both wore head-to-toe Gucci shot by Hick Duarte. "What pride! Let's keep occupying more spaces every time," wrote David Miranda, an openly gay Brazilian congressman, on Instagram. "Long live all that we are and represent."

"I came in the car researching Vogue's iconic covers and absorbing the fact that now it is my turn," Groove said in the accompanying interview. "I am living a dream and I am thrilled with the invitation because being here positions drag queens as fashion icons." Vittar concurred: "I always knew I was going to get where I am. It is not wrong for you to love yourself, to take care of yourself. People will have to learn to respect you for who you are."

It was neither's first time appearing in the mag, but with a cover story you level up. "They are a force of nature, two very brave ladies and real icons not only of our increasingly strong LGBTQIA + community, but also of a new chapter in Brazilian pop music," says photographer Hick Duarte, who was inspired to portray drag queens as fashion icons from a classic fashion photography perspective. "Our main references for the shooting were images of photographers from the 1940s and 1950s, such as Richard Avedon, Irving Penn and Horst P. Horst. We played with visual codes of royalty and with the notion of chicness built from the very first issues of Vogue magazine."

Many were surprised to learn that the world's most famous drag queen, RuPaul, hadn't beaten them to it. Though RuPaul was shot by Annie Leibovitz for Vogue's May 2019 issue, that cover was ultimately given to Kim Kardashian West. Yes, Kim K received the cover timed to the camp themed Met Gala and not the world's most decorated drag performer. Choices!

Asked for their reaction to the covers, J. said this: I saw them and they are beautiful. I paved the way for them to be on the cover. Drag is the culture now. Innovation was the culture when Carine [Roitfeld] did the cover. It was also a form of rebellion."

What about Rani Kohenur, Lush Monsoon, Zeesh, Betta Naan Stop, Ivanka Das, Maya The Drag Queen and Shakti? All of whom appeared on covers of Vogue India's September 2019 shared on the brand's Instagram page? Those were created for social. Actress Priyanka Chopra appeared on the print cover.

Okay, so that makes Vittar and Groove the first, yeah? Not so. In fact, they were robbed of the honor just a month earlier on the front of the same very Vogue publication. One of four September 2019 Vogue Brasil covers featured drag artists and activist Uyra Sodoma on its cover. That was herstory.

Now, is Vogue boo boo the fool for not putting any queens on the cover until now — and for still never putting a drag queen on the cover of the American publication? "I think so," says Luke Meagher aka @hautelemode. "The issues Vogue & Condé Nast have been publicly facing about diversity, during the calls for Justice about George Floyd's murder and Black Lives Matter protests, doesn't seem exclusive to racism in my opinion. I think a whole host of issues like homophobia and transphobia have probably been very prevalent for years as well. Maybe resulting in a fear of putting queer people on covers because it would disturb their image."

If that's true, it's even more head-scratching that Vogue Brasil of all publications would be the first to make the move, considering their country's sordid history when it comes to LGBTQ+ rights. The country has one of the world's highest rates of violence against gay and transgender people, and its right wing president, Jair Bolsonaro, has been open about his hatred for the community. "I have [parliamentary] immunity to say: yes, I'm homophobic – and very proud of it," he said in an on camera interview during his time as a congressman. Still, the country has seen progress. In June 2019, six of the country's eleven Supreme Federal Tribunal members successfully voted to make homophobia and transphobia punishable by law. These covers, which on Monday extended to include drag artists Bianca DellaFancy and Haelssiar, could be seen as yet another signal that LGBTQ+ people are worthy or value, being uplifted and, in fact, quite glam. Clearly American Vogue has this sense, what with their constant inclusion of queens through the magazine's imprint. And yet, no cover, not even for RuPaul.

So American Vogue, to quote Julie (Jennifer Love Hewitt) in I Know What You Did Last Summer: "What are you waiting for?!"