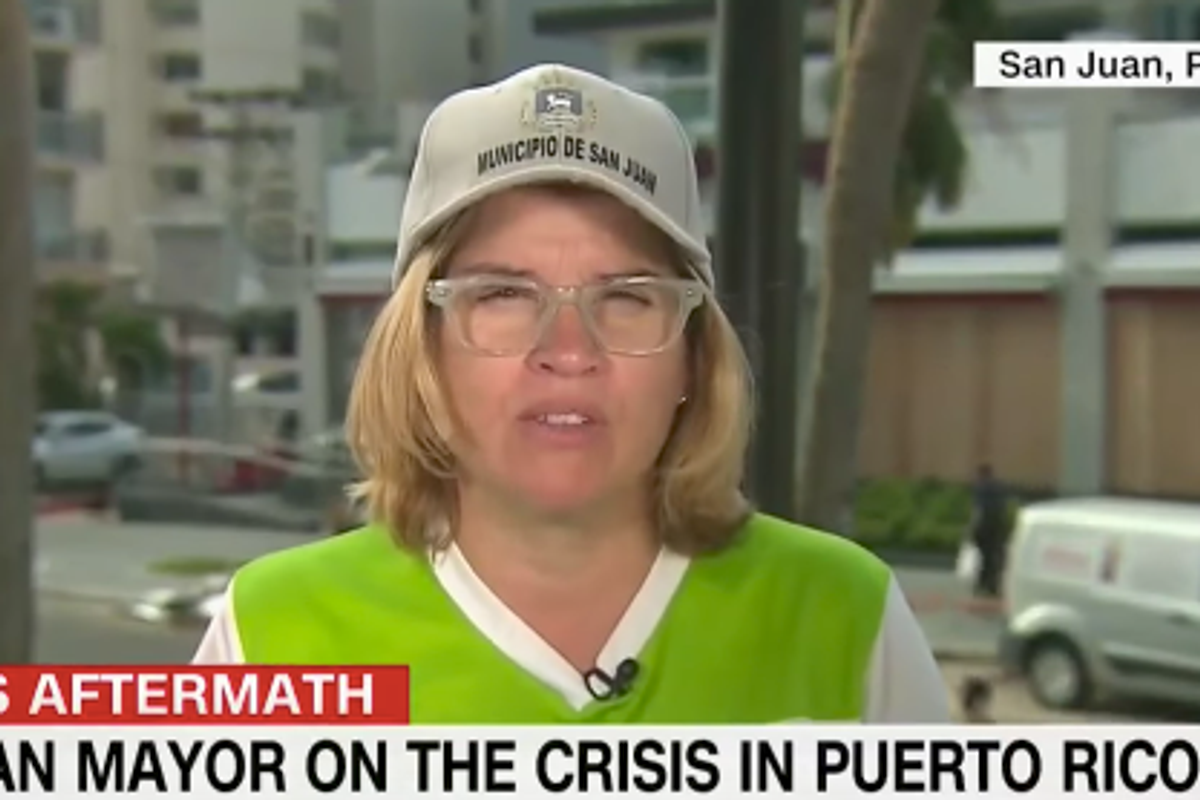 President Trump attacked San Juan Mayor Carmen Yulín Cruz on Twitter this morning after she made a desperate plea for more help for Puerto Rico in the wake of Hurricane Maria's devastation. Trump accused her of exaggerating the situation for political gain and for showing "poor leadership."

The Mayor of San Juan, who was very complimentary only a few days ago, has now been told by the Democrats that you must be nasty to Trump.
— Donald J. Trump (@realDonaldTrump) September 30, 2017

...Such poor leadership ability by the Mayor of San Juan, and others in Puerto Rico, who are not able to get their workers to help. They....
— Donald J. Trump (@realDonaldTrump) September 30, 2017

...want everything to be done for them when it should be a community effort. 10,000 Federal workers now on Island doing a fantastic job.
— Donald J. Trump (@realDonaldTrump) September 30, 2017

Cruz had criticized a comment by Homeland Security Elaine Duke on Friday that the disaster response was a "good news story."

Reports from the ground in Puerto Rico sharply contrast with the positive comments the White House has given on the federal response to the disaster.

Cruz added in a televised statement in which she declared she was begging for more help, she said, "If we don't get the food and water into peoples' hands, what we are going to see is something close to genocide."

The goal is one: saving lives. This is the time to show our "true colors". We cannot be distracted by anything else. pic.twitter.com/7PAINk19xM
— Carmen Yulín Cruz (@CarmenYulinCruz) September 30, 2017

Trump has accused the news media of downplaying the efforts of first responders to the storm in order to "take the spirit away from our soldiers."

On Friday, Trump bragged to reporters, "It's been incredible, the results we've had with respect to loss of life," and referenced Puerto Rico's debt several times. White House Press Secretary Sarah Huckabee Sanders echoed these sentiments, tweeting that a Washington Post story about the slow federal response to the Hurricane is fake.

The army lieutenant general put in charge of the federal response to the humanitarian disaster, Jeff Buchanan, has said there's a shortage of both troops and supplies to the island, and Lieutenant General Russel Honore, who led the Hurricane Katrina relief efforts, said that Trump "doesn't give a damn about people of color."

Trump is currently at his golf club in Bedminster, New Jersey. He plans to visit Puerto Rico on Tuesday and possibly the U.S. Virgin Islands, which were similarly devastated.

To be clear, this is the mayor of San Juan who he insulted. She's using a bullhorn to find people. pic.twitter.com/OsbcNKANLd
— Denice Frohman (@denicefrohman) September 30, 2017