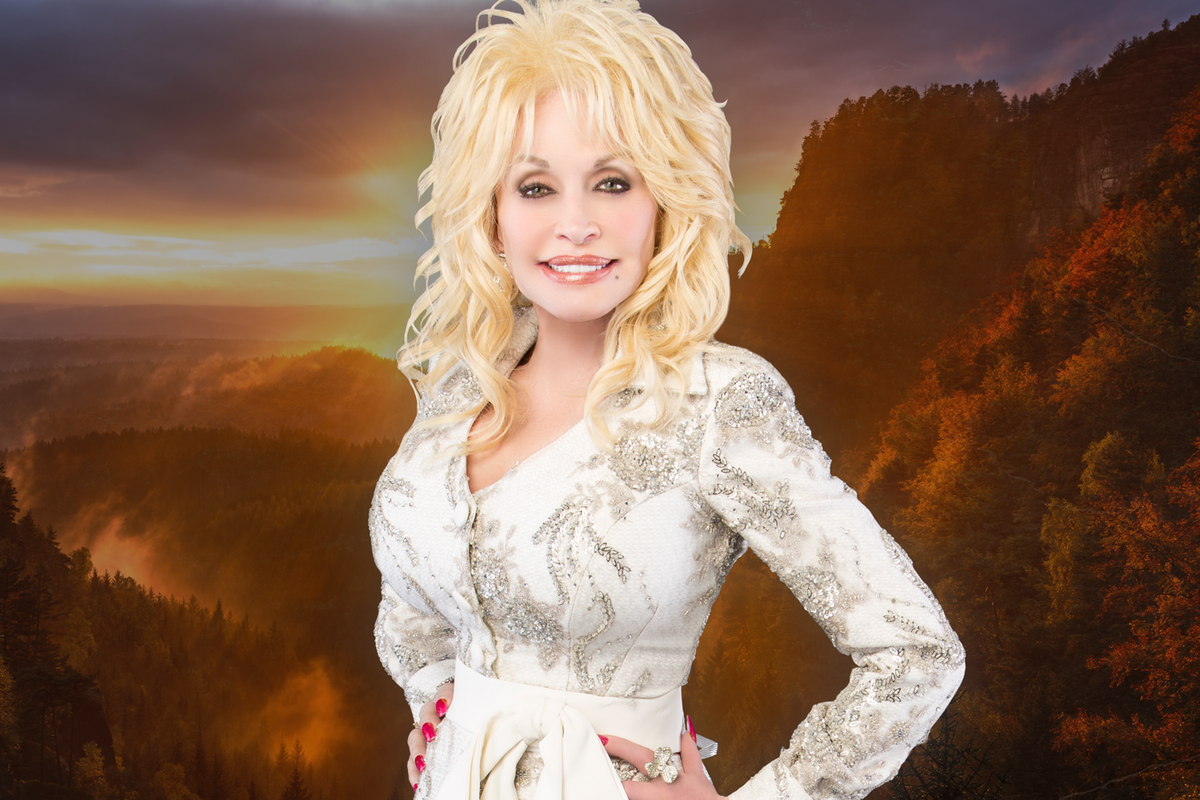 Dolly Parton Will Save Us

We all love Dolly Parton. Not only has the 74-year-old entertainer's stardom failed to dim a notch over the past 50 years, but her status as a pop cultural fixture has seen a resurgence of late. She has a podcast (Dolly Parton's America hosted by Jad Abumrad), a Netflix show (stream Dolly Parton's Heartstrings), a rom-com starring Jennifer Aniston (Dumplin'), a track on Kesha's Rainbow (and an EDM single with Galantis) and a lovable octogenarian Twitter presence. Her hit "9 to 5" recently became a meme, thanks to the rising popularity of socialism. BTS loves her! Lil Nas X wants a Dolly "Old Town Road'' remix! She's interviewing RuPaul! The Met Gala theme is camp! Her rhinestones and acrylic nails, embrace of all things artificial and outrageous, and brand of homegrown feminism have all proved remarkably well-suited to the sensibilities of a generation raised on the internet, whose parents weren't born when she was starting her career.

For her younger fans however, Dolly's pop cultural icondom is apt to overshadow her career as one of the prolific and influential country artists in history. The powerhouse singer has 50 studio albums, six live records, five movie soundtracks and over a hundred charting singles under her tightly cinched belt. She reigned as the most nominated female artist at the Grammys until 2014, when she was unseated by Beyoncé (which… fair) with 51 nominations and 11 awards. The kids know "Jolene," but do they know Dolly also wrote "I Will Always Love You," and (as lore goes) penned both in the same night?

Quarantine is the perfect time for a Dolly deep-dive, and she's making it easy for you. On Friday, the singer has released six of her albums on streaming platforms, putting nearly 100 of her songs online for the first time: Little Sparrow (2001), Halos & Horns (2002), For God and Country (2003), Live and Well (2004), Those Were The Days (2005) and Better Day (2011). To celebrate the release, PAPER is digitally premiering (the video previously aired on broadcast) the official music video for her 2003 single "I'm Gone" off Halos & Horns.

If you haven't heard it, the single is a perfect place to start. "I'm Gone" has everything a Dolly Parton song should: twanging banjo, a relatable heroine, a no-good ex, and an uncanny mix of humor and sincerity. The packing-your-bags anthem sees her offer various suggestions to her ex, for what to tell people about where she's gone. "You can say I left you or I died/ Say I'm in the Himalayas on some spiritual quest... Say I'm in the witness program with the F.B.I./ Say a U.F.O. abducted me from home," Dolly sings in her perfect husky rasp. In between jokes, she earnestly lays out exactly why she's leaving: "You think that you're above me, like I'm not good enough/ You make me feel unwanted, unwelcome and unloved."

The kaleidoscopic, Microsoft Word Art-heavy music video sees Dolly illustrate (literally, in animated form) all the different options she lays out for her ex with various chintzy graphics. Watching a dozen Dollys play the banjo and bat away cartoon spaceships is a treat, but hands down, the best part is the live-action aliens. Dolly happens to agree.

PAPER caught with Dolly about how she's holding up in quarantine, love advice and how the video came about.

How are you holding up and staying sane in quarantine?

I'm actually doing great, following all of the quarantine rules and living on faith.

I know so many couples who stayed in relationships because of stuff. I've always said that I would never stay with anybody who didn't love me no matter what. So the song kind of wrote itself as I described all of the things (in a humorous way) that you would leave behind if you left somebody.

You're so decisive in this song. What's your best love advice for someone trying to figure out whether or not to stay in a relationship?

Shoot, I'm not Dr. Phil, and I don't don't claim to be any kind of love guru. All I know is, to thine own self be true, and follow your heart. Praying about it never hurt either....

Tell us about this wild music video. How did it end up looking like this? What was it like to shoot?

Me and the director actually just wanted to have fun. The video was really bright and colorful and funny. I loved the aliens! We just wanted a video that we felt was as cheery as the song, hopefully we got there.

You wear many hats besides musician, but you've released over 50 albums. As you re-release some classics, is there one body of work or moment from your music career you're most proud of?

I always love doing live videos because the audience gets to participate and it's just a good time all around. Getting to relieve some of the classic albums that are Bluegrass is some of my favorite work. For God and Country, Halos & Horns, and Little Sparrow are all favorites of mine because the storytelling in each song is deeply personal to me. But you know, I can't choose a favorite album, I love them all.

Any words of advice for people struggling during the pandemic?

This too shall pass, we will come out of this better people if we choose to. Keep your heart open, and your eyes towards God.