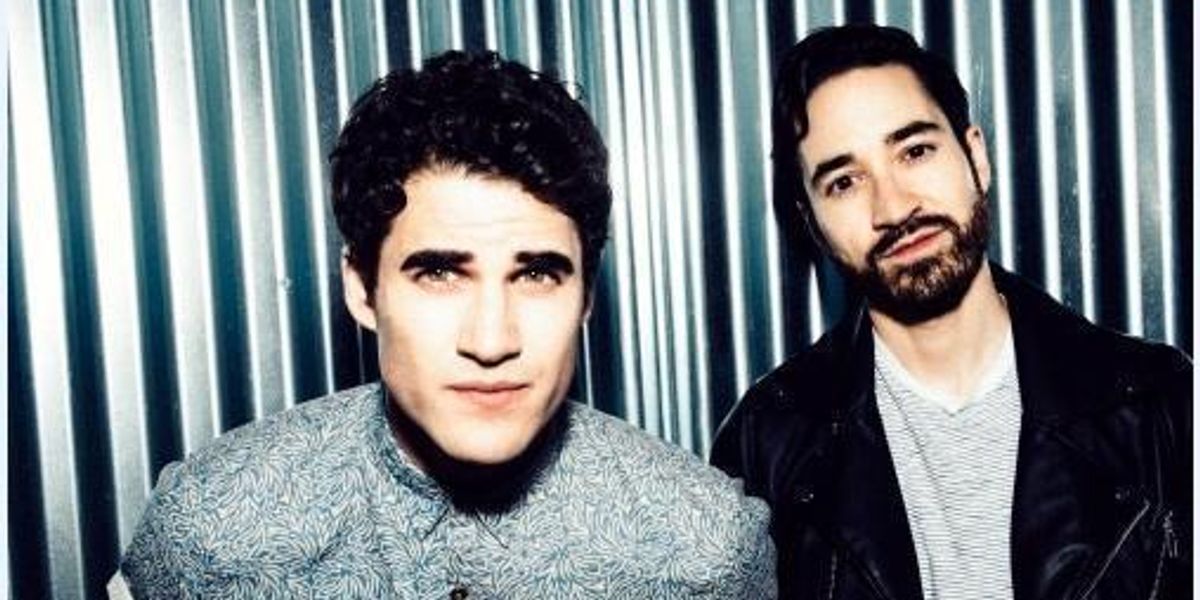 Music has always been at the center of brothers Darren and Chuck Criss' lives, but it took them in different directions. 32-year-old Chuck made a name for himself in the indie rock scene as a part of the band Freelance Whales and his 2013 solo album. For 30-year-old Darren, the first taste of success came from founding a musical theater production company called Starkid Productions--and then in the role of Blaine Anderson on Fox's little music club show, Glee. However, creating a project as brothers has always been in their minds. Now, Chuck and Darren Criss have finally decided to release some of the music they had been making together over the years under the moniker Computer Games. While the brothers aren't sure how long Computer Games will last (a full-length is still up in the air), their EP Lost Boys Life pays homage to their childhood love of pop music, playing video games, and cheesy '80s synths. We caught up with the Crisses to talk about the project's longevity, making music as siblings and their love for left-of-center pop.

You guys have been at different ends of the musical spectrum in a lot of ways. How did this project come about?

Darren: The weird thing about being an artist is that you never really get to choose how people are going to perceive you. You can only associate yourself with people who allow you to be your genuine self. However, the way your work is consumed is out of your hands. I had no idea that I would end up being a part of this mainstream pop phenomenon on television [Glee] -- that's nothing someone could have ever planned on. I was certainly lucky to be put in that position, but it was never something I shot for. In the same way, Chuck couldn't have planned to meet the guys from Freelance Whales. We were both very lucky in that regard. It wasn't calculated. The reason I bring this up, is because even though we were placed in different boxes, we come from the same factory. We listen to the same music. We have almost an identical genome, both literally and figuratively. We always kind of have the same outlook and taste, which is why this project was so long overdue. We had these very lucky side roads and the dust had settled and we decided to come together and share our music with people. It's something where we have really been on the same page for a while.

How'd you come up with the name Computer Games?

Chuck: Growing up, we weren't off playing video games, we were off playing computer games. The idea of computer games changing over time like Sim City, Oregon Trail or Level Assault. As we got older, we started learning how to use Pro-tools and Logic and more musical computer games. That's why the name exists. It goes back to how we work together on projects. It sums up our relationship and it has a nice, modern context to social media and even the way we interact with fans now.

Darren: The creative output of Computer Games is the same creative output that we put into ProTools and Logic: we're just having fun. The band is about having unapologetic fun. We just wanted something that represents nostalgia.

How did you come up with the title Lost Boys Life for your debut EP?

Darren: It's a title of a song that Chuck has had for a while. Even though we've made a lot of songs together, these are the few we tried to put as our best foot forward. Two or three tracks were songs that Chuck had made demos of. The songs had smooth lyrics, but very specific choruses. I always really loved the title of "Lost Boys Life." I thought it had this great clean energy of nostalgia for us guys in their 30s who are entering full-on adulthood and choosing to leave behind their childhood. A lot of people thought we were inspired by Peter Pan, but Chuck and I were leaning on vampires.

What were you guys listening to when you made the EP?

Darren: Chuck and I listen to everything. We took from the pop charts what we thought was doing well and what we wanted to do well. One thing to note that a lot of people have commented on--which we're thrilled about, but should be made clear it wasn't the intention--the record unintentionally evokes this early '90s synthy dance record vibe. It wasn't our intention -- we just picked these three songs and wanted to make them as fun as possible. As that started to happen when we were in the studio, it became more genres than I thought. I'm really thankful for SAINT MOTEL, St. Vincent, St. Lucia--all the patron saints of music -- [they're like] 80s dance revival groups, but there's a real amazing polish on them. I think we rode the cheesy vibe a little harder.

Chuck: I remember watching a Peter Gabriel documentary and I came up with the guitar riff for "Every Single Night." That song evolved, but we were trying to pull things from the past that weren't revived yet. I like the idea of cheesy '80s chart-toppers. In the past I would have avoided it, but in this project I just wanted to accept it. I love dance music. We basically wanted to write our version of club music.

How have your lives changed since the end of Glee and Freelance Whales? Has this been a dramatic shift for you guys?

Darren: I wouldn't say it's a dramatic shift at all. It's a new thing. If anything, like I said earlier, it's almost kind of frustrating that we didn't get to it earlier. The reality is I don't think we would have been able to do this without the experience I now have and Chuck now has writing and recording songs. It feels like a natural thing for me.

Chuck: Freelance Whales slowed down and I found out I was having my first kid. When you find out, it's kind of like superhero, flip-a-car mode. We wrote Lost Boys Life in that time period, and we let it sit a little bit. It came from a place of change for me, for sure. We're just big pop music nerds.

Darren: There's an underlying metaphor here -- the basis of a lot of these songs are pretty simple. If you're a musician who's into really complex things, you might roll your eyes. We enjoy taking something really simple and finding the complexities around it. If it starts with a simple guitar riff or a simple bass line, we build it out from there and try to make it as simple as possible. That's the underlying M.O. of Computer Games in general.

Chuck: I was working on a lot of music on my own post-Whales. The more I did it, the more it started to fit Computer Games. I was like, "I should work on this with Darren."

Darren: Before Glee, my main squeeze was my group Starkid. Basically, out of college, my big break was an internet comedy group that changed my life. Starkid was my musical, creative outlet. That's when I realized I could be a songwriter for a living, which is why I eventually ended up writing songs for Glee. The last songs I wrote was right when I joined Glee. That was the last Billboard record I had. Anyway, that was my outlet for writing songs. Right after Glee, I have a singer-songwriter EP in the can, which I'm waiting to put out later this year. I was originally going to put out the singer-songwriter EP at the same time I put out the Computer Games EP. After being absent for a while, I didn't want to confuse fans or people who weren't familiar with myself, to focus on one thing at a time. I have a TV pilot I've been in development with for a while. There's a lot percolating. That's also why it was important to get Computer Games out, because it's only three songs. We thought it was cool to put out the songs, tour and let it incubate before we put out a full-length. We're using the "figuring it out as we go" model.

Is this a one-off project?

Darren: It could be, but I hope it's not. It's a promise Chuck and I made to each other as teenagers. We're doing it for us. We hope people like it, but if it doesn't catch on, there's no harm done. This is a total passion project. We hope there's enough interest where we can keep it going at some level. While I hope it isn't a one-off project, we're open to all avenues.