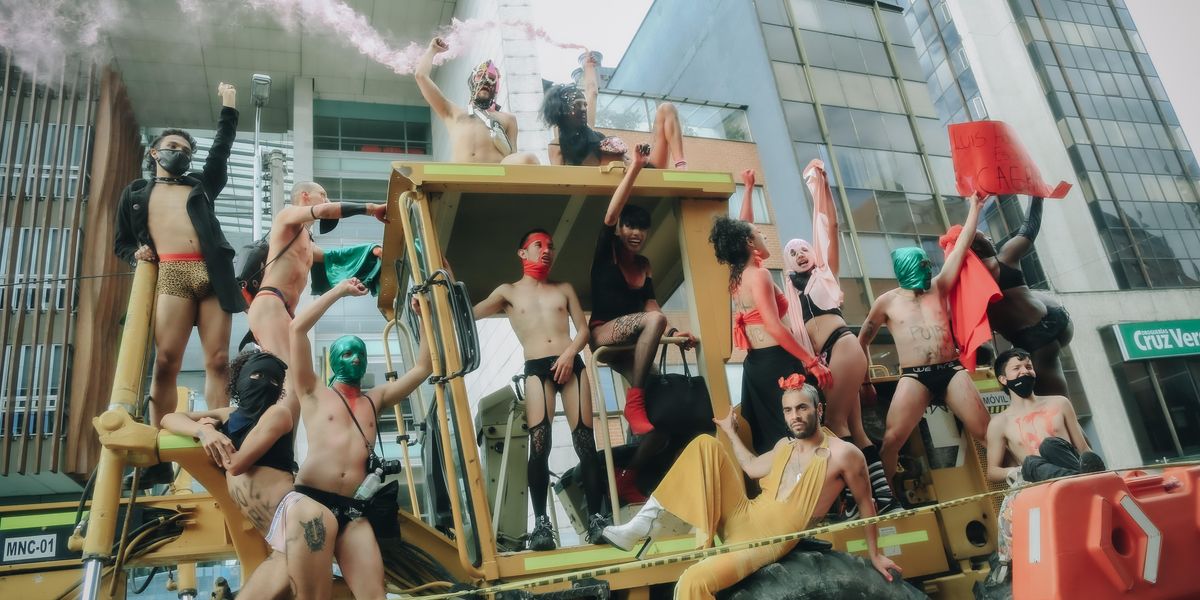 After almost a month, nationwide anti-government marches have continued to happen across Colombia. Initially spurred by a proposed tax reform bill, the protests have since morphed into all-encompassing calls for social change, such as better healthcare, an end to police brutality and steps to address income inequity. But even so, the administration of right-wing President Ivan Duque has continued to repress protestors and escalate violent force against them — something which has led to multiple deaths and thousands of documented incidents of state-sanctioned violence.

However, in response to the ongoing issue, a group of trans and queer activists created the country's first Trans & Queer Front — known as Resistencia Trans y Marika — and are now trying to raise $15,000 to continue their fight on the front lines as a way to induce "radical change in how we view our government, its armed forces, and an imperative to organize from within a dissident framework," per organizer Pantera Godoy.

And the way they're doing that? By putting themselves "on the frontlines because it obstructs the police state from acting against our naked bodies," as Amapola Yeguaza said.

"We're armed only with our corporal movement, our dancing, as a way to defend ourselves," Yegauza added, before Demonia Tamara also elaborated that trans and queer "bodies are revolutionary weapons, more powerful than tear gas, a soldier's armor or police guns."

"Deploying our naked bodies in the street, inserting them into the public sphere, is the most powerful weapon in this revolution," Tamara said. "With our bodies on the frontlines, we know the state is most afraid because we have nothing to lose and much to gain."

After all, as Oscar Diaz went on to explain, the US has a long history of "globalizing an economy based on violence" that often sees trans and queer folks having to be "present on the frontlines of this fight because it's often us who face the severity of the state's neglect and its assault on our livelihoods."

"We continue a legacy of dissidence and resistance by organizing our community to defend itself and cultivating mutual aid to hold each other safe from the turbulent conditions imposed on us," as Diaz said before sharing a series of exclusive photos capturing members of the Trans & Queer Front in both their beauty and battle for equity and action.

"We're undeterred in creating a world where we can radiate joy, share abundance and pleasure, and insist on an economy of care for each other," Diaz continued. "These captured moments reveal how menacing, divine and pleasurable we can be in the pursuit of our liberation."

See Diaz's photos from the Trans & Queer Front's protests, below, and donate to the organization, here.