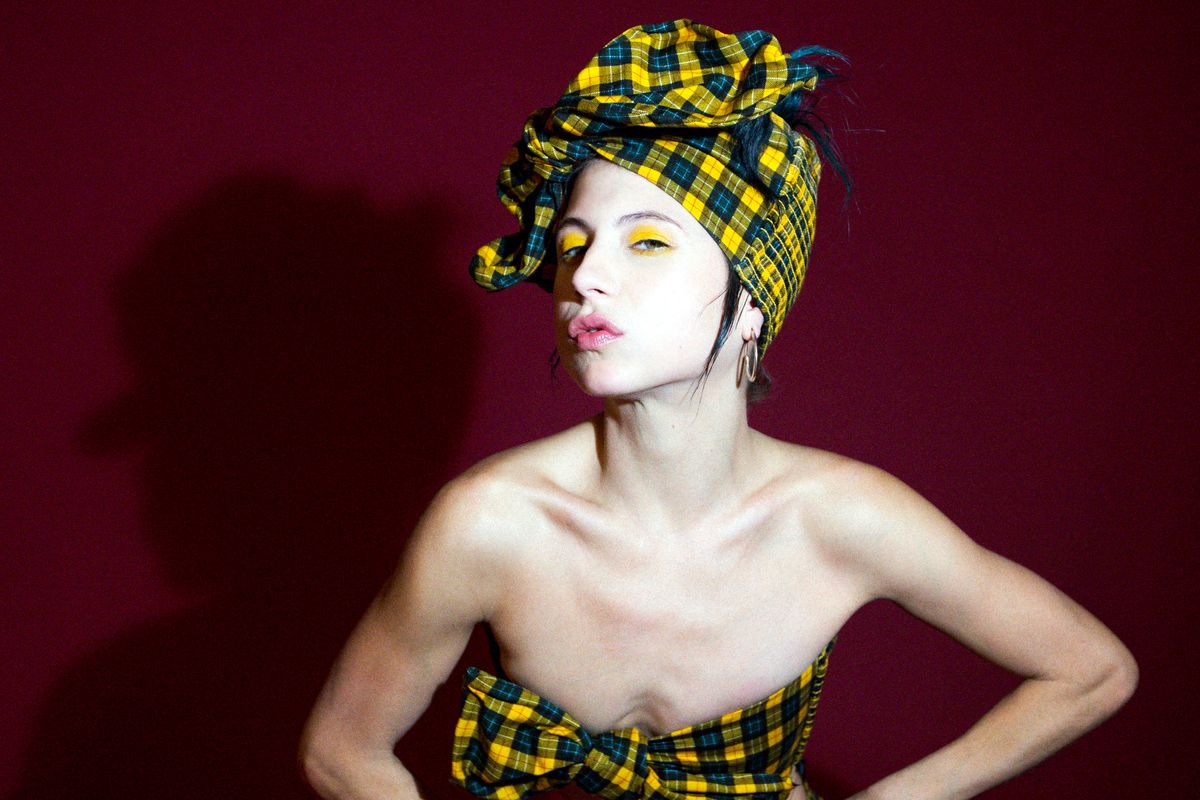 Seeing the band Kitten play live is a kinetic and rewarding experience. Much of that has to do with the electric stage presence of lead singer Chloe Chaidez, who writhes, yelps, jumps from amps, scowls, and flashes mischievous, full-tooth grins at her captive audience. The 24-year-old musician has fronted the Los Angeles-based six-piece pop-rock outfit for the last eight years, and fittingly she describes it as "my heart and soul."

Chaidez's allegiance to Kitten was put to the test when she joined Nasty Cherry, a new four-piece, all-female band formed as a very real manifestation of teen punk dreams by pop tastemaker, Charli XCX. "Charli and I have been friends forever," Chaidez explains. "She first asked me to join the group maybe three years ago."

In the vein of Diddy's MTV Making the Band reality series before it, sans (occasionally brutal) elimination rounds, Nasty Cherry's formation and journey to prove themselves as credible musicians is documented through a new Netflix series, I'm With the Band: Nasty Cherry, streaming now.

Charli's "why not?" motives behind forming the group — consisting of vocalist Gabriette, bassist Georgia, drummer Debbie, and guitarist Chloe — are certainly pure enough. Not to mention, the premise of putting four previously unconnected women of varying musical backgrounds together on-screen certainly makes for compelling TV.

However, Chaidez's initial tensions within the group dynamic quickly rise to the surface during the rehearsals and co-writing sessions that would produce their debut project, a just-released EP called Season 1. It boasts a dreamy, '80s synth-rock sound, produced by Justin Raisen (Ariel Pink, Sky Ferreira), but is updated for today's badass Juuling punk queen.

Early in the series, Chaidez is positioned as something of an outlier — she's the Nasty Cherry member with the most demonstrative musical experience aside from Debbie, who was the touring drummer in Charli's all-female live band. In the first episode, Debbie pretty accurately describes Chaidez as "a glamorous '50s model in a hyperactive 12-year-old boy's body." Gabriette, a model with oozing magnetism, had never sung professionally before, and Georgia, a creative polymath who grew up with Charli in the UK, taught herself bass when propositioned to join the group.

The rest of the series chronicles Chaidez's highs and lows in balancing being filmed in a band that was just launching, while running the ship of her own established project. "I just wanted to prove to myself that I could do both," Chaidez says. "It's nice to take somewhat of a backseat as the not-frontwoman of this group, but still be an active member."

Whatever struggles she had to overcome, Chaidez eventually makes it all work, finding something special in the unique circumstance of Nasty Cherry's assembly while remaining true to what she's always known. Chaidez says she knew she made the right choice to stick things out when Nasty Cherry's first shows in LA and London were sold out. She says she also knew Charli was somehow right about it all working. "I worship this bitch," Chaidez says. "She dives into every idea like an Olympic sprinter, full force, pedal to the floor — and I love that. She takes these huge risks and it often pays off because she fucking dared to do it. That's really special."

Alongside the Nasty Cherry Netflix and music launch, Chaidez formed the songs of Goodbye Honeymoon Phase, her 2019 EP with Kitten. The EP unapologetically embraces the angsty Millennial rock pioneered by women like Avril Lavigne, plus glossy mall-pop tropes galore. "For years and years in interviews, journalists were like, 'What was your first record?' And I would think Let Go by Avril Lavigne, but then I would say, 'Uhh, I don't know, a Bowie record,' which... I fucking love Bowie, don't get me wrong. But Avril Lavigne was actually my first record, and that's okay," Chaidez says.

Plus, the sound of Goodbye Honeymoon Phase was shaped by the often-overlooked music of the early-to-mid-aughts, by artists ranging from Michelle Branch to System of a Down. For Chaidez, this sensibility is part of Kitten's longstanding commitment to the underdog — something viewers also get a glimpse of in the Nasty Cherry series.

"There's basically a decade of iconic, youth-centric rock and pop-punk that's completely looked over, and I think there is really great production, great lyrical ideas, and just so much fun and humor in that music," Chaidez says. "And I'm all about that. So I guess, Kitten and I just wanted to look at that: what's being ignored."

Another stalwart of the aughts, Linkin Park's Mike Shinoda, helped add to the EP's propulsive edge by producing "ME." (He contacted Kitten via DM, interested in collaborating.) For Chaidez, it's the sound of a band affirmed by its own growth, of putting in the work since they were teenagers.

"I definitely feel like I've hit my stride recently, and I've been doing this for a fucking long time," she says. "What I've learned is that I'm going to be an evolving chameleon throughout the rest of my life until I'm 80 and in my deathbed. So when I'm really inspired by something —right now it's the Goodbye Honeymoon Phase EP — I dive into it unashamedly. Later on, you can morph into a different chameleon, and that's okay. I think part of building that confidence is constantly finding ways to be comfortable where you are in each moment."

Songs like "Memphis" embody the occasional melancholy of life on the road, away from what's familiar. The EP title track, which Chaidez says is about a fight she once had with Kitten bandmates, feels like being on a tour bus that stopped at a midwestern mall Claire's for gauge piercings. And "ME" is a defiant, snarling, stadium rock rebellion. "Sick of them pretending to know me," Chaidez sings. It feels like a cheeky, if truthful nod to her stint as a first-time reality star with a growing profile. In the video, Chaidez re-imagines iconic reality shows like The Simple Life, and is a paparazzi-hunted celebutante on the LA streets, pushing cameras away and imitating nostalgic scenes of letting loose in her bedroom.

On Instagram, when promoting I'm With the Band, Chaidez playfully referred to herself as the Snooki of indie rock. "At first, I was shying away from comparisons to other reality stars," Chaidez says. "Now I fucking love it. Gimme a Kim Kardashian crying meme, but make it rock and roll, you know?"

And off-camera, she's an uncanny merge of her many influences, from Gwen Stefani to Avril: strong, assertive women, who are what Chaidez calls "masters of the art of flow." Other than that, no matter where Chaidez goes next, even if that involves scaling higher heights with Nasty Cherry, Kitten remains her pride and joy.

"With this group it's really the friendship that's kept us together for this long," Chaidez says. "We have an endless group chat, and we're telling jokes all the time. I think it's really amazing that six individual artists are in the band. And we're always going to rock out together, in whatever capacity that is."