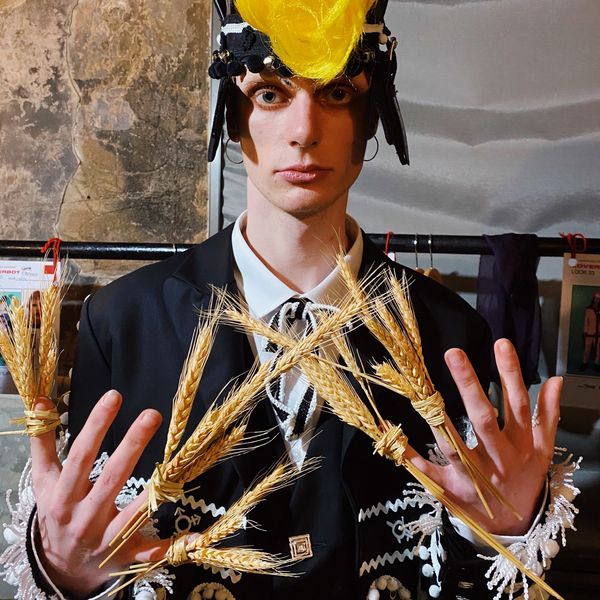 These Models Had Actual Wheat Stems Attached to Their Fingers

At Charles Jeffrey Loverboy Fall 2020, the mood was pensive. Using the evolving discussions around climate change and Greta Thunberg's inspiring activism as a jumping off point, the young designer asked a number of big questions at London Fashion Week Men's.

Addressing everything from Brexit to the current ecological disaster that envelops the world, Jeffrey expressed his anger through puff shouldered jackets, asymmetric suits and tartan trousers.

Related I A Drunk Granny, Maisie Williams and Giant Hoop Skirts at Loverboy

"An older, hidden, generation have made brutal calculations and we've inherited their catastrophe," the show notes read. "This is a broken future."

The designer had several other points of references — '80s punk, Teddy Boys and Scottish militia uniform — but the collection remained largely focused on how human interaction has significantly evolved and altered nature.

Perhaps one of the most literal representations of the theme was visible on models' fingers, which appeared to have giant wheat stems attached to them.

"I wanted to use a range of natural materials on the hands as it was a literal representation of our manipulation on the planet," Sylvie Macmillan, the nail artist who created the look, tells PAPER. "Working with nature is awkward, delicate and difficult. I wanted the hand and nail looks to reflect this."

Although the resulting look may appear effortless, Macmillan says it took a lot of work. To start, the artist used a "non-toxic and thermodynamic plastic" called Worbla to create rings that pinched the fingers together. Next, she used a hot glue gun to apply the actual wheat stems to the rings.

"When with the model, I used a strip of wig tape around the finger, applied the rings on top of that, then used a couple of extra kernel stems to wrap around the base, fastening with more wig tape," she says.

The ultimate goal, however, was to complement what Macmillan calls the "ceremonial" aspect of the collection, finding "ceremony in nature." She says, "The image of a bunch of wheat is often used during Harvest celebrations in the UK. It was one of the first ideas that came to mind when I saw the collection."