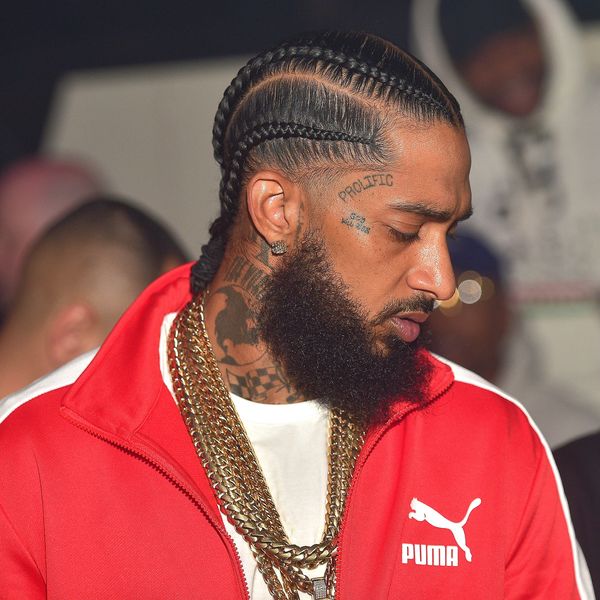 Nipsey Hussle, aka Ermias Asghedom was shot and killed in Los Angeles last night at the age of 33. He left behind his daughter Emani and his son Kross, who he had with longtime girlfriend Lauren London. He was a titan of West Coast hip-hop, and a respected community philanthropist, who was deeply invested in empowering the South Central Los Angeles neighborhoods he grew up in. His most recent album, Victory Lap, was nominated for Best Rap Album at the 2018 Grammys. As Nipsey's community begins to grapple with his loss, a long list of his friends, peers and those he inspired — which stretches far beyond the music industry — have paid their respects to the rapper.

Related | Nipsey Hussle on Kendrick, L.A. Rap, and Why Patience Pays Off

"Before we got on this stage, we got wind that our brother, our warrior, our soldier Nipsey Hussle passed away. So we want to take this time out, to give a moment of silence, can we do that?" Kendrick Lamar said on-stage at Lollapalooza Argentina, hushing the crowd.

Iamcardib on Instagram: “What a sad day 😢. Rip to a real stand up guy! a great representation of positivity and change to the community. May the Lord give your…”

You were about something..positive and for your community in every chance you had to speak..and because of that You… https://t.co/jvaA0r3dV3
— Pharrell Williams (@Pharrell Williams)1554078174.0

Diddy on Instagram: “Wow. I don’t even know what to say. I’m confused. Nipsey and I had just started really getting to know each other. I feel honored to have…”

This is so painful! @NipseyHussle was doing great work for the people. Keep his legacy alive by carrying on his wor… https://t.co/mdz3Xn0Kg3
— Colin Kaepernick (@Colin Kaepernick)1554083835.0

@snoopdogg on Instagram: “Our last conversation 💙🙏🏽. Gods plan can’t be questioned NHIP ✌🏾🌹 c u when I get there 🕊🕊”

Dr. Dre on Instagram: “I’m feeling so fucked up right now. R.I.P Nipsey Condolences to your family. WTF!! Can we please stop!!!”

Watching Nipsey inspired me to invest and own in our communities. He was a solid man who loved his woman, his famil… https://t.co/DndFHQfzgd
— Issa Rae (@Issa Rae)1554078158.0

Jimmy Neutch- Shumpert on Instagram: “RECEIVING A PHONE CALL LIKE THIS IS THE LAST THING I EXPECTED in the middle of just finishing up the treatment for our new record has my…”

Nasir Jones on Instagram: “We are at a great loss today. This hurts. Straight to the point. It’s dangerous to be an MC. Dangerous to be a b-ball player. It’s…”

the Real Swizz on Instagram: “I was so proud of my brother this night. We made a cheers for his progress , growth and more success 🙏🏽 I told him how fresh he looked and…”

OFFSET on Instagram: “BLACK MAN ON A JOURNEY OF POSITIVITY KILLED THIS A SHAME TO OUR CULTURE REST UP HOMIE”

Jada Pinkett Smith on Instagram: “Rest in Love Nipsey. I am an admirer of your wisdom which will now be part of your legacy. My heart bleeds for all those who love him. Stay…”

BADMON on Instagram: “I remember this day clearly we were both at Puff crib on the humble. T shirt and basketball shorts both of us. It’s funny because I think…”

RIP Nipsey. I just spent Thursday with him filming a video for a beautiful new song we created with Khaled. We fi… https://t.co/Sn5ejtJscL
— John Legend (@John Legend)1554084356.0

@ludacris on Instagram: “God just lost a Son, a son just lost his father, a family just lost their king & hip hop just lost one of their elite. One of the Greatest…”

Kane on Instagram: “Til we meet again my brother....Rest Peacefully....we all lost today. 😢”

Killer Mike on Instagram: “🙏🏾💙. A black man, was murdered today. He was a man to his woman, a father to his children and a leader in his community. We are weaker…”

Mike WiLL Made-It on Instagram: “UR HUSLE AMBITION FOCUS & WORK ETHIC WAS PASSED IMPRESSIVE TO ME , AS ARTIST WE HAVE OUR OWN LIVES SCHEDULES ETC GOING ON SO WE A LOT OF…”