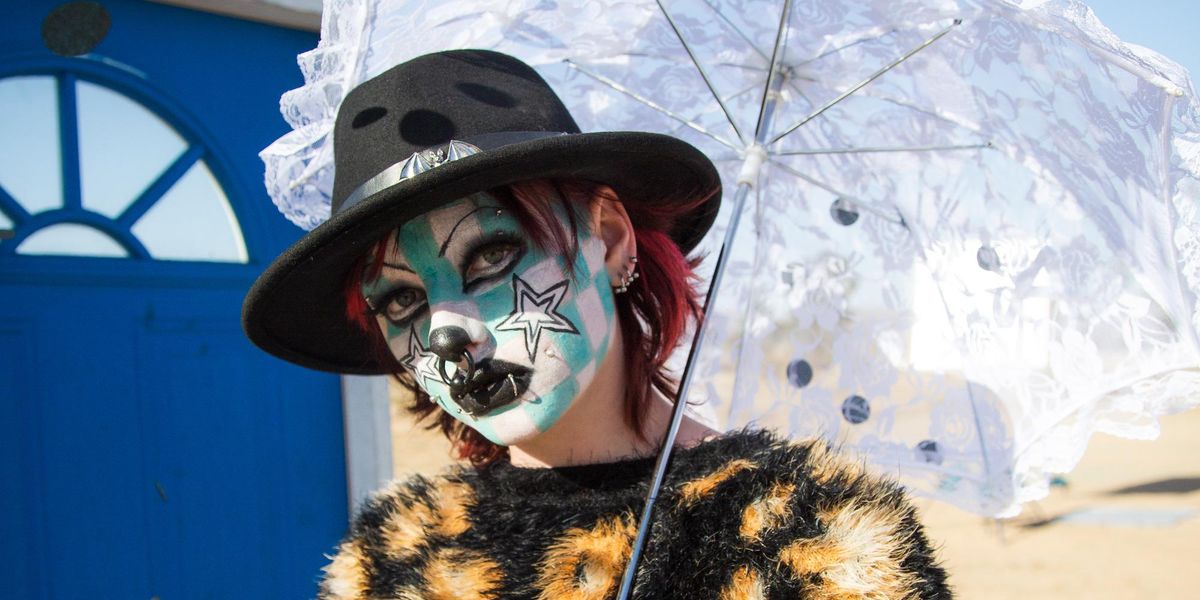 Growing up in a large family can sometimes make it hard to stand out. But musician carolesdaughter, the youngest of 10 kids raised in a bustling Mormon household, was always the self-described "center of attention." Even today, standing out from the crowd comes naturally: she's got nearly 704,000 subscribers watching her every move on TikTok, as well as a hit debut single that, just earlier this year, saw her name sitting pretty under the likes of Billie Eilish and Taylor Swift on the Billboard Hot Rock & Alternative chart.

Raised by strict, loving Mormon parents in Southern California, Thea Taylor always felt like an outsider. She spent much of her tween years home-schooled, and in her teens attended five different high schools before eventually dropping out. But she always had "huge goals" and, even as a little kid, would tell her family, "'Don't worry, I'm just going to be a famous musician when I grow up!'"

At home, Taylor and her siblings sang songs of faith together. She was encouraged to learn how to play an instrument, but wasn't allowed to listen to much secular music beyond what was played on the radio or at church. "I didn't even know what metal or hardcore was until I got a phone and computer. I wasn't allowed to use headphones as a kid because my parents wanted to hear what we were listening to," she shares over Zoom. "My sister would play the radio on the way to school, but if we were listening to the radio with my parents and there was some sort of sexual connotation or some hidden message in a song, they would turn it off."

That all changed when she saw a random Black Flag logo tattooed on someone one day and googled the image. The door to punk music swung open, and she was eager to explore this edgy new world of goth fashion, piercings and not-so-squeaky-clean music. She jokes that she'd be "a lot less cool, probably" had she never discovered the punk scene and peripheral genres.

Around the same time she started to rebel, between the ages of 13 and 17, Taylor struggled with her mental health and developed issues with drugs and self-harm, resulting in multiple trips to rehab. It was her last six-month stint at the rehabilitation center, to which she brought her acoustic guitar, that saved her — in more ways than one.

"Music has always been what I wanted to do. It really did save me," the now-18-year-old says. "I'd been through all this shit and I was like, 'What do I have to fucking show [for it] except anxiety and panic attacks?' It was either go forward and keep going, or don't and die. Music was the only thing that made me happy. I don't think people write or are creative in that way unless they have some sort of mental turmoil going on. In rehab, all I could do was put it into songs. It gave me a sense of purpose."

While at rehab, she decided that when she got clean and returned home, she'd finally pursue her dream of making music and would record and release some of the songs she had been working on online. Initially as a joke, a friend came up with the idea for Taylor to call herself carolesdaughter, after Taylor's mom, a schoolteacher. But then the name stuck: "I basically worship my mom. None of my friends' moms can compare. No one is better than Carole."

In February 2020, Taylor made good on her promise to herself and uploaded her first song, "wish i wuz dead," to SoundCloud. Over the next few months, she continued recording and uploading tracks to the service, where she began to gain traction thanks to her ethereal vocals and dark, intimate lyrics recounting past traumas and relatable angst. But it was in the spring, when the artist uploaded "violent," a cathartic trap-acoustic pop song about a previous abusive relationship, that things really took off.

When a follower on her TikTok asked the artist to make the track available on the app, she obliged. Before long, the song was everywhere, soundtracking 300,000 videos on TikTok to date, including clips from popular creator @scoobiezoobie and pop star Madison Beer. Ironically, the track almost didn't make it to streaming: she had built the song on top of a random copyrighted beat she found on YouTube and, because of that, at the time couldn't even upload it to Spotify (where, a year later, it has since been streamed nearly 60 million times).

"I was looking for beats inspired by Lil Peep," Taylor, who had been a fan of the late rapper since she was 13, explains. "I put the song on SoundCloud just for the listeners that I already had — I didn't have many at all at the time — but they loved the song and it was doing numbers on its own. In the first month, it probably got like 20K [streams], which was pretty good for a nobody on SoundCloud. When it blew up on TikTok, I was like, we need to get this out now."

By November 2020, Taylor started getting "hit up by pretty much every record company." At first, she thought it was a scam: "I was just getting these Instagram DMs and I didn't know how legit they were." On her 18th birthday, just half a year after launching her TikTok account, she signed with Arista Records. A few months later, in January 2021, she was in the car with her mom when she heard herself on the radio for the first time ever.

"I'm really glad that I have that on video forever," Taylor says. "At first, we were both like, 'Okay, don't cry...' I didn't think I was going to make it to 18 for a long time, and so to hear my song playing while driving through the town [where] I went to high school with my mom next to me … was just a super close moment for us." The singer recorded the meaningful experience and uploaded it to TikTok, where it's been viewed nearly 25 million times.

Taylor credits much of her success to the popular video-sharing platform, where "stores, businesses, musicians, painters, any type of artist, anyone" can blow up overnight. "There's not really another platform that does that anymore," she says. "Suddenly, people [like me] are being thrown into the music industry, which I'm super grateful for, of course. I can't say for sure, but I honestly don't think I would've had this opportunity so soon."

Of course, TikTok has its dark side, too. For one, Taylor knows she ultimately has no control over how her music is used on the app or what it becomes associated with. "There've been plenty of weird TikToks to my song. Also, because we've promoted myself and the song, people now know who sings it, but before, when it started blowing up, it felt like everybody knew the song but nobody knew it was by me. Everybody thought it was by someone else and that's not ideal when you're making music."

Plus, she'll occasionally find herself on the "conservative" side of the FYP, leading to hate comments about her lifestyle or how she dresses. "I get tons of people just hating on my piercings. Based on my whole look, I expect people to think I'm weird. The one comment that actually bothers me is when people who are in subcultures try to hate on me. They're like, 'Oh, you dress punk and goth but you made a pop song on TikTok!' Like, fuck off."

With her multiple piercings and tattoos (which include tattered demon wings on her back, as well as a new face tat), blood-red hair, razor-sharp punk eyeliner and mallgoth style, Taylor is a beacon to the misfits and alt kids on social media. Dressing the way you want, especially in a way that pushes against societal norms, offers a sense of control in an otherwise chaotic world. "Maybe you have to go through something to become this way. Everybody around the world right now is going through a lot," Taylor muses. "People are angry and looking for a way to express themselves when everything else is out of control. For me, looking this way has always been a way to fight back. It's a way to say, 'I can do whatever I want to my body.'"

After spending her childhood in the notoriously restrictive Mormon church, Taylor has strong feelings about autonomy and nonconformity, admitting that during her time in the church, she "looked like every other Mormon girl, but knew I wasn't like them and felt like an imposter and that everybody would hate me if they knew the things I thought about." The musician officially left the church when she was 13. She maintains a negative opinion of her time in the faith, stating that she will "never be Mormon again."

"My parents are still Mormon but they don't force me to go to church and they don't tell me how to dress anymore," she says. "I'm happy that my parents are accepting of me, after struggling for so long with so much shame and the feeling that I couldn't be proud of myself or that my parents could never be proud of me because of things they had been taught by the church. I had to unlearn a lot of fucked up things to be okay with how I am today, because if I walked into church now, everybody would look at me like, 'You're a sinner!' I wouldn't be accepted. It's all okay now though, but it's never okay to grow up feeling like you're an outcast all the time."

Being an outcast is a recurring theme for carolesdaughter. Her latest single, the darkly sunny, Western-tinged bop "Trailer Trash," is about feeling like a social reject. The "summer anthem," as Taylor describes it, was written during her last trip to rehab and was inspired by the raw, honest folk-punk writing style of Johnny Hobo, AKA Pat the Bunny. "I hope nobody gets mad at me, because the truth is I've never lived in a trailer," she admits. "It's more about the concept and the principle — similar to 'violent,' because I've never driven a car but I can still sing, 'I drive back to you.' I think people will be able to relate to the lyrical content."

For Taylor, being able to simply reach other young outsiders who are struggling to find their way in the world is what makes her struggles all worth it in the end. "It's a really great feeling when you feel like you're doing something for someone else and not necessarily just for you," she says. "I don't know anybody else who's making songs that I can relate to on the radio. I just want to be that person for somebody."