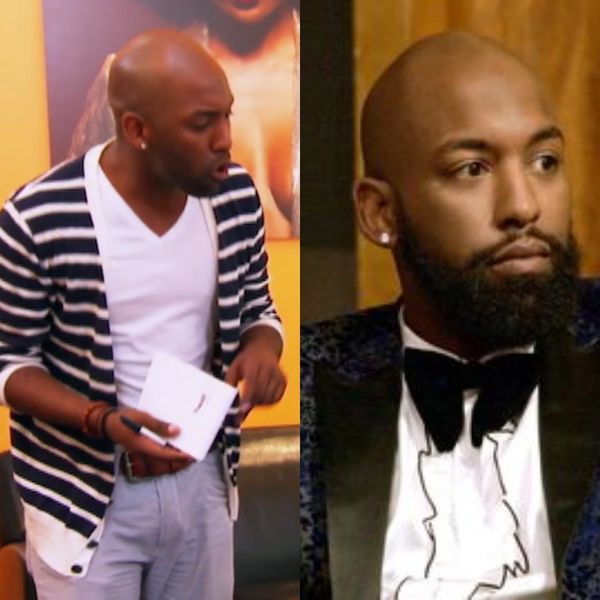 Have you watched Love Is Blind? It's Netflix's mad scientist lab-concocted entertainment stunt, in which men and women go on "dates" in "pods" separated by a wall, and then get engaged after about five days days. Everyone is drunk, everyone is hot, and everyone's trying to wife.

One of the new show's most chaotic stars is Carlton: a suave earringed guy whose plotline revolves around the fact that he's bisexual. He doesn't reveal this to Diamond, however, the woman he "proposes" to, resulting in a poolside blowout on their "honeymoon." The scene ends with Diamond screaming the lyrics of Beyoncé's "Don't Hurt Yourself" at Carlton (i.e. "Watch my fat ass bounce to the next dick boy... You ain't married to no average bitch boy.") The ring ends up in the pool.

Wait. Carlton from Love Is Blind is the same Carlton who was Cynthia’s assistant in RHOA that got escorted out by K… https://t.co/5I8V5AKncY
— Murad Merali (@Murad Merali)1582393085.0

Now, in a turn of events that makes total sense, it's surfaced that Love Is Blind is not Carlton's reality TV debut: he actually starred on one iconic 2012 episode Real Housewives of Atlanta. In the episode, while serving as an assistant for housewife Cynthia Bailey, Carlton managed to get himself escorted out of the building after picking a fight with housewife Kenya Moore.

The context: Cynthia (who owns a fashion agency) was hosting a casting call for JET's "Beauty of the Week" and made the mistake of offering a judge spot to Kenya, who berated the models, taking issue with one woman's bathing suit that she thought inappropriately revealed the "coochie crack."

Carlton, who's clearly always looking to the next viral moment, went in on Kenya's harsh judging style: "I just think there's a respectful way to let them know, some of them are coming here, it's their first time modeling." The pair entered full catfight mode, ending in Cynthia having to pull Kenya's inexplicable bodyguard (Cynthia: "...Nobody knows who she is, just makes no sense") off poor Carlton.

Say what you will, he knows how to elevate an on-screen fight to the next level. According to IMDB — under his stage name Carlton "Mr. Couture" Morton — he also once cameoed something called Divas and Cocktails.

Carlton's certainly figured out how to make a splash on Love Is Blind: today he made a now-deleted Instagram post calling out the show and Diamond for biphobia, so you'll want to tune into the "wedding" episode, available February 27.