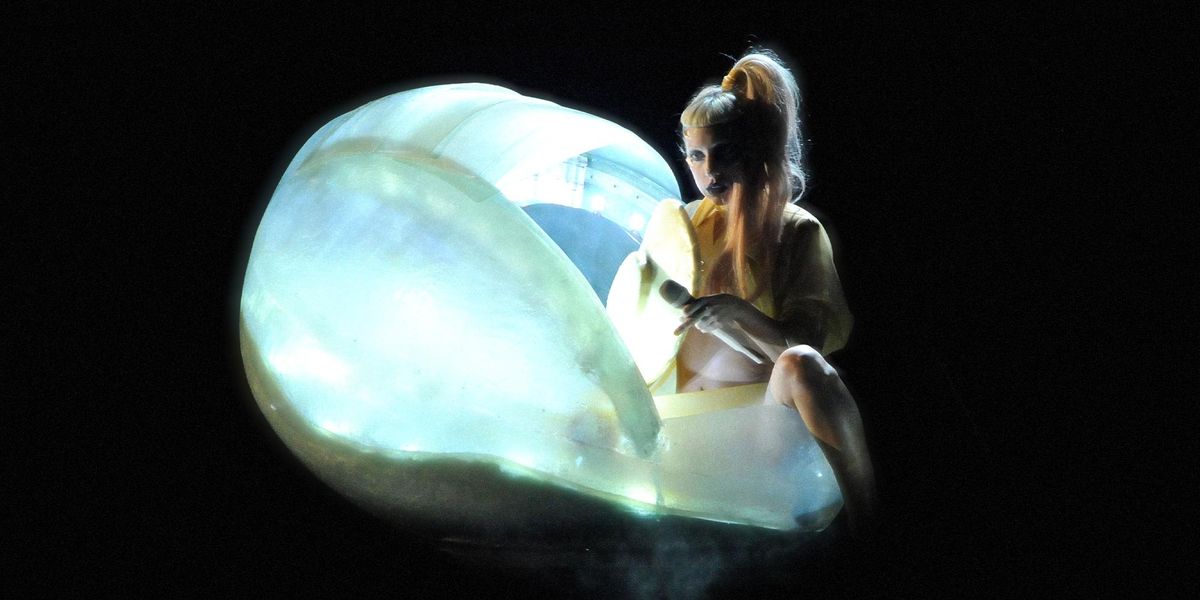 Five 'Born This Way' Era Performances You Probably Forgot About

"My friends joke that I'm dead until I get onstage," Lady Gaga said in a 2010 Cosmopolitan interview. "I'm dead right now as you're speaking to me." While many elements of Lady Gaga's artistry — vocal ability, musical arrangements, political and social messaging, fashion — deserve praise, and have contributed to her outsize success, for me, it's always been about her live performances. As she dangled, dripping in blood, from a chandelier after her 2009 breakout VMA performance, she established herself as a force best understood on the stage.

Her live performances offer a chance to see the elements of her artistic vision collide. It's where you feel a bevy of backstage creative decision coalesce. On stage is where you see the specific alchemy of her entire project burst with the most life.

Ever beholden to era-specific reinvention, Gaga's live performances can be categorized like seasons of American Horror Story. Born This Way saw her leave behind the disco ball laden imagery of The Fame and the lace and glamour of The Fame Monster. Her third studio album ushered in a period of latex and leather, her most confident vocals yet and balls-to-the-wall ideas. By the time Born This Way debuted in May of 2011, she'd solidified her position at the peak of pop's pantheon. Now was her time to play in it.

Gaga spent most of 2011 promoting the album with performances the world over before launching the Born This Way Ball. Ever the promotional machine, she appeared on talk shows, morning shows, reality shows, competition shows, award shows and radio shows to introduce the world to her newest creation. These broadcast performances are unique in that they show the space where the world bristles as it touches hers. In a music video or at a concert, Gaga has full creative control over her surroundings, but these television appearances often reveal the space where our world ends and hers begin.

Her two most famous performances during the Born This Way era are most likely (and most deservedly) her Grammy performance of the eponymous song in which she emerges from an vessel replete in latex and horned body modifications and her VMA performance of "Yoü and I" in drag as Jo Calderone. While these are both career-making performances, there are a smattering of smaller yet equally entertaining ones from this time in her career that didn't receive quite as much attention.

On the 10-year anniversary of Gaga's electro-rock-pop world takeover, I took a peek back at some of the forgotten performances that define the era.

The walls of Ellen's trademark set slide apart to reveal Gaga in blue latex low rise bell bottoms and a faded amber wig. Gaga and her dancers feel so completely alien on the talk show program that when the camera cuts close to reveal small horns set into the skin above her eyebrows it almost makes sense. We're shown the audience standing and bobbing along to the chorus of "Judas," her meditation on betrayal and redemption set to a thumping house beat. I love imagining a room full of tourists who woke up early to make a live taping of The Ellen Show only to be met by Lady Gaga clomping on the floor in blue stilettos shouting "Fame, hooker, prostitute, wench vomits her mind!"

For the first half of this performance of "Marry the Night" on an episode of the X Factor UK, Gaga is barely visible. She remains hidden by the curtain of a confessional booth set towards the back of the stage, her face only slightly illuminated behind a sheet of black lace. About two minutes into the song, she emerges from the booth to reveal what has to be one of her most cumbersome costumes of all time: a decapitated corpse carrying its own head. Her face is the head behind held by a torso that towers above her. She moves slowly to the front of the stage where she stands pretty still for a majority of the song before retreating back to the confessional booth, ripping off the costume, returning in a lace bodysuit and delivering one final energetic dance break. If I ever sat next to Gaga at a dinner party I would ask her about this choice.

During a performance of her song "Hair" (an ode to personal expression and, well, hair) on the French program Taratata, Gaga made sure no one in the audience forgot the name of her song or where it was being performed. She sits at a piano crooning a ballad version of the song while a long blue ponytail stretches from the back of her head to the top of a replica of the Eiffel Tower behind her. "I flew into Paris and my hair got caught in the tower," she tells the show's host before jumping into a version of the song in French. Across her chest she has written the word Paris, again the name of the city in which she's performing. Oh, and the keyboard is covered in hair, too.

Gaga began her performance of "Edge of Glory" at the MTV Video Music Awards in Japan trapped inside a giant spider web. It's one of her only arachnid inspired set designs, but it works quite well for her. By the song's first chorus she has untangled herself enough to perform choreography. As she transitions to "Born This Way" she moves across the stage to a giant spider-shaped piano inspired by Louise Bourgeois' sculpture "Maman," a casting of which sits at the Mori Art Museum in Tokyo. Someone understood the assignment...

For an appearance on The View, Gaga joined the women in her best approximation of news anchor chic: dripping in pearls and in head-to-toe houndstooth, complete with a skirt suit, glasses, a hat, a clutch and shoes that featured the print. A bit of houndstooth even seemed to spill off her outfit and bleed onto the skin around her eye. She performed "Yoü and I" at a piano completely covered in, you guessed it, houndstooth. Especially evident on a show as mild mannered as The View, Gaga always seems to outstretch the confines of her environment. At one point she kicks back the piano bench and stomps frantically at the floor, before tossing her hat and purse over her shoulder. The mild mannered audience just sort of stands there clapping along to the beat, seemingly unsure if they're part of her world or merely privy to it.