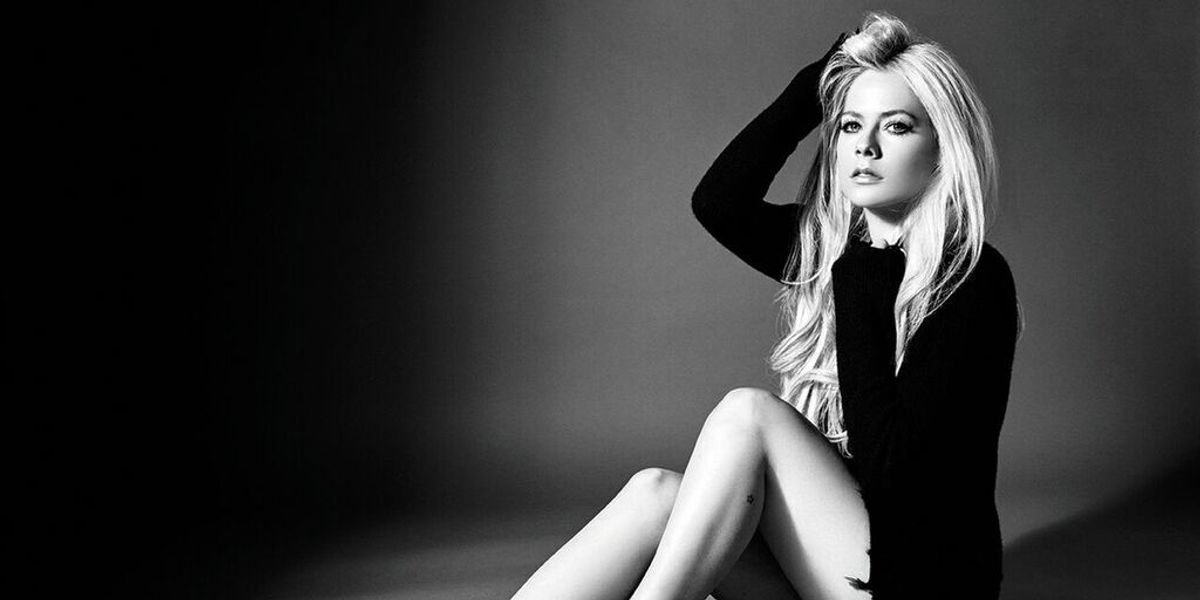 New Music Friday always promises a plethora of that good-good new-new from some of your favorite artists, maybe some long-awaited, maybe some tired, through, and delayed, and maybe some songs by a treasure trove of #whos you've never heard of before. We know. It's overwhelming! Thank the heavens PAPER is here help sift through the goodness, the garbage, and the noise, and bring you the best every Friday. We gotchu, sis. But for today, we bring you some newer love-related jams in the spirit of Valentine's Day and whatever other freakiness you get into over the weekend. Let's bop to it!

Avril Lavigne is back with her first album in five years, Head Above Water, and just the fact it exists at all, is a triumph. The pop-punk icon battled Lyme disease complications that kept her out of the spotlight, and this album's release is a testament to her perseverance. It makes sense then that Avril's album is full of thoughtful and unexpected sonic experiments, without losing her trademark sincerity. Case-in-point, on "Crush," an album standout, is every bit sincere, finding a worldly, vulnerable vocal performance in Avril, whose lovelorn croon effortlessly adopts affectations from country to doo-wop. I know, it sounds like a melting pot that will raise an eyebrow, but we've never heard Avril sound quite like this (which is to say she sounds incredible). Have you ever fallen so hard for someone it's as if you might melt right where you stand? That's "Crush."

Related | Avril Lavigne's New Album Is a Cry for Help, In a Good Way

Lizzo is fast making a case for why she's a bonafide pop star we cannot turn away from, and we wouldn't dream of doing such a thing. She released the cover to her upcoming album, Cuz I Love You, and its title track is every bit as audacious, swaggering, and fiercely vulnerable as her image conveys. She wails in a class of top-notch soul singers alongside brassy horns, giving us a high-stakes show tune about loving someone else deeply because she loves herself that much more. Go off.

Drake's technical debut was his So Far Gone mixtape, the precursor to the runaway hit that was 2010's Thank Me Later, The tape was said by both critics and fans to have created a modern blueprint for hip-hop success. And it's true, many a famous act across genres build followings by self-releasing mixtapes before getting signed to a major label, where, then, an artist can measure success on their own terms. Now that the tape is 10 years old and Drake is a superstar, it makes sense to re-release it on streaming platforms. It's a flex that we are here for. One of my favorite moments from So Far Gone is his ingenious flip of Lykke Li's "Little Bit," pulled from her 2008 debut album Youth Novels. Drake's choice to sample "Little Bit" is arguably an homage to Li's independence too, considering that Youth Novels was released on her own label imprint, LL Recordings. Either way, both musicians specialize in striking a delicate balance of nostalgia and melancholy, perfected by an impeccable sense of melody. Drake's "Little Bit" is an aptly sentimental response track that sets the stage for his career in emotionally vulnerable songwriting as it concerns his relationships and insecurities. Plus, Drake and Li sound totally in-sync here, so there's that.

Internet pop sensation Slayyyter has released her eighth single since breaking out with the viral hit "BFF" just last August. Fusing her proven ear for smart pop hooks, the deep, dark corners of pop culture and celebrity, house music, and always tons of sex appeal, "Mine" further capitalizes on the cult brand the 22-year-old singer-songwriter from St. Louis has been steadily building upon. It also finds our heroine cutely confessing her desire to consume a crush, and to be consumed by it. "Oh me, oh my/ I wanna make you mine" goes the infectious, simplistic hook, and it sort of says it all. Why get metaphorical about attraction when you can just make it plain and also give the gays exactly the kind of hedonistic lovelorn bops they crave? Thank you for your service, Slayyyter. You've done it again.

Cardi B and Bruno Mars are back with another smash, in "Please Me." Seeming to pick up where their summertime remix of "Finesse" left off, their latest collab is another old-school R&B-referencing tune, in which Cardi makes her pleasures and desires known, and Mars is in the passenger's seat ready to serve. It's super sexy, catchy, and, chances are, you'll be hearing this everywhere pretty soon, which pleases us.

Son of a Bishop is the performance moniker of seasoned performer Matthew Johnson. Johnson grew up in a musical family in Atlanta, and from an early age, sang in church (his father was a respected bishop) before ultimately singing back-up all over the world for top acts ranging from Chance the Rapper to Stevie Wonder. Now ready for his close-up, Johnson releases his debut EP Are We There today. His soulful vocals and songwriting blends gospel's passion with trendy R&B and pop. "Love Left Me Lonely" has cinematic verses that build into a cathartic chorus that goes to the rafters —choral arrangements and all — where he pleads for someone he loves to stick around. With a debut this strong, there's no need to plead with us; we're not going anywhere.

Rising British musician SG Lewis is back with a new single from the last of his trio of conceptual mini-albums (Dusk and Dark have both come already), and now, Lewis is ready for the Dawn. "Blue" finds Lewis returning to the form of his earlier breakthrough tracks, deciding to perform solo (you may recognize previous collaborations with artists ranging from singer-songwriter Raye to the Neptunes' Chad Hugo). On "Blue," Lewis' long-term collaborators Phairo and Frances create a beat-driven backdrop layered with spacey synths for Lewis' echoing vocals to hover above. This is significant, because it's as Lewis and his collaborators musically personified the color blue. It somehow feels both aqueous and expansive, much like the dawn of a new day, and certainly, the possibilities of Lewis' own future.

Chicago-born, rural-Wisconsin raised singer-songwriter Monica Martin grew up listening to Billie Holliday on YouTube, and when you listen to "Patient," the latest in a string of singles, you can hear the legendary jazz chanteuse's enduring influence plain as day. Over spare, piano-led instrumentals, Martin's richly textured voice glows like a soft, distance lighthouse illuminating the horizon of a calm sea. The song is a heartfelt plea from Martin for a lover's steadfastness, while she navigates the "space between the one you want and the want you need." Stay a while and bask in the soothing light of Monica Martin's "Patient." It won't take long to come around to seeing her side of things.

Alternative rock band Badflower released "Promise Me" today as their latest single from upcoming debut, OK, I'M SICK. Its addictive guitar riffs and colorful pop-punk melodies highlight a heart-on-its-sleeve song that's essentially about the fear of growing up and losing love, according to a press statement from lead singer Josh Katz. Of course, this fits right into the 20NineScene comeback we've been waiting for (and championing!). Welcome Badflower to the party.

Our girl JoJo is back in 2019 stronger than ever, which, is, of course, great news for all of us, but especially early-aughts pop culture enthusiasts. After re-releasing the first two albums that made her a household name, here she is again, dueting with Grammy winning singer PJ Morton, on "Say So." The two trade silken harmonies beautifully rooted in the place it was made: the magical, richly musical New Orleans. I don't know about you when I hear singing this buttery and delicious, I am also transported to other places of comfort and not-too-far-away fantasy. Like, if some person I'm feeling says they love me, I suddenly want to be everywhere with them, in Paris, on a California terrace overlooking mountains and sea, eating a buttered (there's that word again) croissant or some shit like that, just taking it easy, soaking in my surroundings. Good music, and good love will have you feeling like that. May you, dear reader, find your own version of this. PJ and JoJo say so.