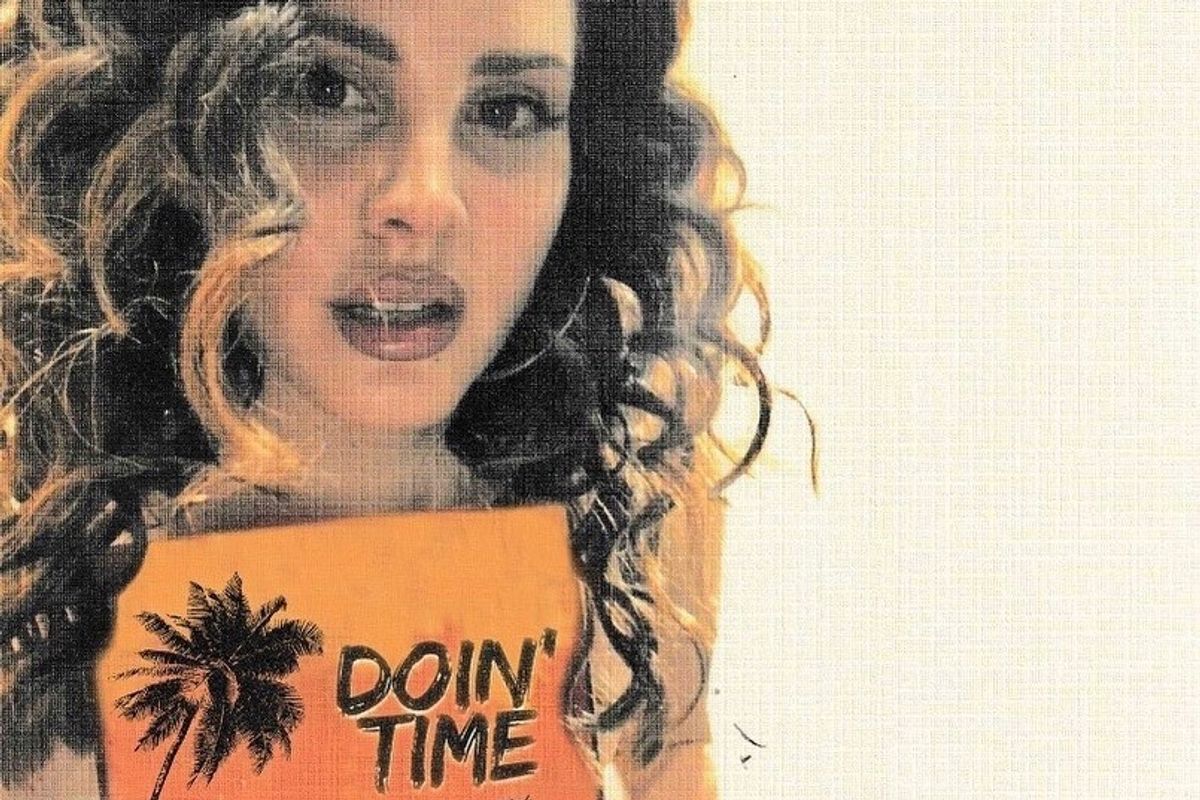 After teasing it for over a week with snippets on Instagram, Lana Del Rey's new Sublime cover of "Doin' Time" is finally here. The song is for the new Sublime documentary that premiered last month at Tribeca Film Festival. Lana's version is a faithful cover that re-enlivens the original so fans of both acts will be pleased, while putting her very special witchy essence onto it. The original instrumentation is updated with deeper bass, propulsive percussion, and a catchy, reggae-lite swagger that Lana totally owns. Plus, the lyrics "All the people in the dance will agree/ That we're well-qualified to represent the L.B.C." sung in Lana's enchanting croon take on a new, California-cool vibe. And "Doin' Time" comes just in time for summer — cue vintage montages of beach bums with tan lines, drop-top convertibles on the 405, and endless rows of sun-dappled palm trees.

Carly Rae Jepsen basically made Dedicated for the gays, so now that we all agree, "Want You In My Room" is the pre-Pride Month, sex positive anthem you didn't know you needed. Anyway, CRJ totally snaps on this '80s-tinged electro-pop joyride, making her desire plain and clear through a magical vocoder. "I wanna do bad things to you/ On the bed/ On the floor," she sings. I have to scream because I feel like my inner slut is being totally validated here. Again, as it gets warmer outside and the shorts get shorter and the drop-tops get lower, I expect to hear "Want You In My Room" plenty times in public, and of course, in private.

Houston hot girl Megan Thee Stallion drops her long-awaited debut album Fever today. It's full of the simmer and innate star power that is quickly making the 24-year-old rapper a sensation. Helming all writing credits save her collaborations with Juicy J and Da Baby, Meg shows off an impressive range of creativity, switching up her flows from party rap to her sobering Texan drawl over beats that incorporate the best of Southern hip-hop trends and soul samples. "Simon Says" with Juicy J is a wildly fun, wall-to-wall banger. Meg is the dance commander, telling you just where to put your hands, knees, toes, and ass, while Juicy J is a willing co-captain. I've been wondering when someone would make this generation's "Get Low," and "Simon Says" is a pretty legitimate frontrunner.

Tyler, the Creator's first album since Flower Boy is here. IGOR is entirely written, produced, and arranged by Tyler, and "What's Good" is so good. The minor-key abyss incorporates multiple Yeezus-style tonal shifts with Transylvanian synthesizer, '90s breakbeats, and fuzzed-out vocals. That "Dracula, Dracula, Dracula" bridge and jagged-breath outro, too? It's admittedly a lot to take in, but Tyler's restless creativity and artistic evolution is undeniable.

Halsey, ever the outspoken feminist, issues a new single and anarchistic new video for "Nightmare" today. The song fuses trap bass trends with angsty rock rebellion, and an instantly memorable hook about what you can't tell a woman who know herself. She shows notable lyrical growth on the track, getting ultra-specific about personal struggles including self-image ("I wish I could cut some parts off with my scissors") and the dystopian reality of womxn and femmes in Trump's America ("C'mon little lady give us a smile/ No, I ain't got nothing to smile about). Then there's, "I've been polite but won't be caught dead/ Letting a man tell me what I should do in my bed" — a nod to the current furor over Roe v. Wade). Halsey's "Nightmare" is a powerful song serving as a beacon of solidarity and a call to action.

On perhaps the opposite end of Halsey's inspiring rage is Morgxn's equally inspiring, soaring piano ballad. "A New Way" is calling for us to find a new way of being — one fueled by childlike wonder and joy. It's about moving beyond despair and darkness and embracing a wilder, freer sense of self. Arena-filling drums and Morgxn's autobiographical lyrics paint a picture for how this is possible for all. "I remember when I was 19/ I remember how it felt to feel untamed/ It's the way you act like you own it/ Cause every story, you hold it," he sings, reminding listeners of their personal power. Morgxn tells PAPER the song was written as a cry for help in trying times. "It's a way back to myself — where joy and hope ran like the blood in my veins," he says. "This song is both about remembering that we have the power but also the responsibility to make a change."

Iranian-Swedish singer-songwriter Snoh Aalegra has a sound so soulful and singular that Prince sought her out before he died. His mentorship of her runs strong in her music, but Aalegra's smooth delivery and captivating presence is all her own. It's felt greatly on "You," a stunning, minimal reflection on unconditional love and devotion. When she sings, "I just can't live without you," that last syllable is stretched and scatted, imbued with warmth, longing, and even a hint of despair. It's raining in New York today. This will be my soundtrack on those days, and whenever I need a little extra comfort. "This is a very special song to me," Aalegra tells PAPER. "It's about the unconditional love you have for that person you can't live without, no matter how much pain they put you through, you're always right back in their arms." Watch the video to "You," here.

Trace leans into her intimate, R&B-soaked electropop on "All My Friends." On it, she contemplates loneliness but transcends it with yogic wisdom. "Change has happened/ It's okay that some things will have to fade," she sings. The song chronicles her experience moving to LA and launching her music career more fully. She examines relationships we keep and why, and implores we all do the same. To that end, "All My Friends" is highly effective: a blissed-out meditation that reminds us we are the company we keep.

Joey LaBeija's first single from his upcoming "pop" project, Tears In My Hennessy is a rhythmic, electronic dance-floor freakout about unrequited love. To mirror how those situations skew one's perspective, LaBeija fusses over a distorted vocal that grows more menacing the more confrontational his lyrics become: "Why you wanna play with my emotions?" Play "Simulated Love" repeatedly to live your best Janet Jackson (revenge) fantasy, and then get the hell out of dodge, should you find yourself unfortunately trapped in an alternate reality with a lover.

Ingrid Andress is an emerging Nashville-based singer-songwriter pushing the bounds of what country music can achieve. (When written immaculately, it crosses over with no trouble, cc: Kacey Musgraves). Having cut her teeth as a top pop songwriter for everyone from Alicia Keys to Charli XCX, Andress is now officially striking her own gold as something of a country-music Sia. You can hear those chops on "Both," which skewers conventional patriarchal storytelling with a refreshingly empowered perspective and a charming sense of humor. In "Both," a song about a lover who wants to have his cake and eat it, too — ever heard the phrase "let's keep it casual?" (groan) — Andress sets a firm boundary that is fair to, like, any sane person. "You can tell me to stay/ You can push me away," she sings. "Baby, love me or don't/ But you can't do both." Yes!