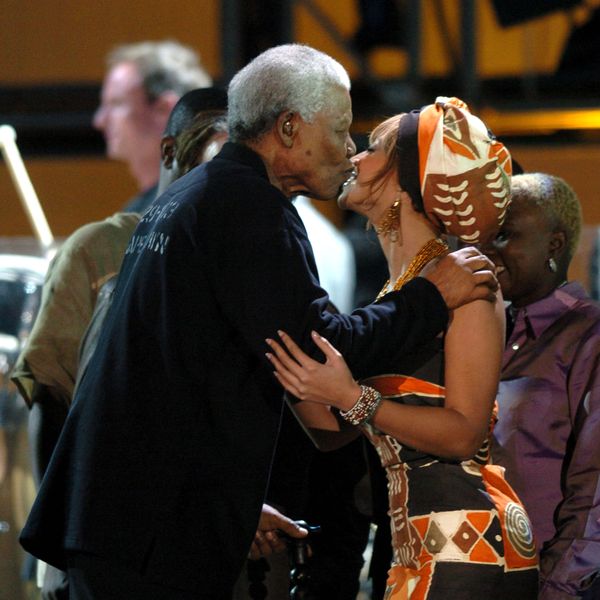 Nelson Mandela was an icon, this fact is indisputable. A champion for peace and a freedom fighter, Mandela led the movement to end apartheid in South Africa and in turn became one of it's most beloved presidents. Now on the 100th anniversary of his birth, artists and public figures are coming together to honor his legacy at the Global Citizen Festival: Mandela 100 in Johannesburg, South Africa this weekend.

Looking to mobilize $1 billion in aid with a mission to end extreme poverty by 2030, the festival is set to be headlined by none other than the biggest star on the planet, Beyoncé. A noted philanthropist in her own right, Beyoncé actually shares a personal collection to Mandela having met the former South African leader in 2004. Recounting her experiences meeting him and traveling to Robben Island where he was imprisoned for part of his 27 year sentence, Beyoncé has shared an open letter about how Mandela has had a lasting impact on her life.

Dear Madiba,
I first met you in 2004 for the 46664 AIDS Benefit Concert in Cape Town, and the impact you have had on my life resonates with me today and every day. Your kindness and gratitude for every experience, and your ability to forgive are lessons I have learned and will pass on to my three children. My entire family holds you in high regard.

It is an honor for me to travel to South Africa this week in celebration of you and your efforts to right so many wrongs. You were a strategic warrior, a bold activist, and charismatic and well-loved leader. Your vision for dignity, for human rights, for peace and a South Africa free of racism and apartheid, allows us all to turn dreams into reality.

I remember taking that walk with you back to the prison on Robben Island where you spent 18 of those imprisoned 27 years. I recall your measured but focused steps in as you recounted the stories of the struggles, the sacrifices and your resilience. You smiled as you talked to a crowd of artists and their guests, including my mother, who first told my sister and me about the great Nelson Mandela. In that moment I truly understood your heart and humility.

You made it possible for so many people like me to reject impossibilities and understand our capabilities in making lasting change in the world. The smallest efforts could change the trajectory for so many living in extreme poverty, facing injustices, the indecency of racism and fighting for their rights as humans.
As we celebrate the Global Citizen Festival: Mandela 100, honoring your centennial year, I promise you that we have made your dreams our own.

Your work and your sacrifices were not in vain. I will cherish every moment shared in your presence and use the lessons learned from you as fuel to stir positive ideas and solutions.
Beyoncé Knowles-Carter