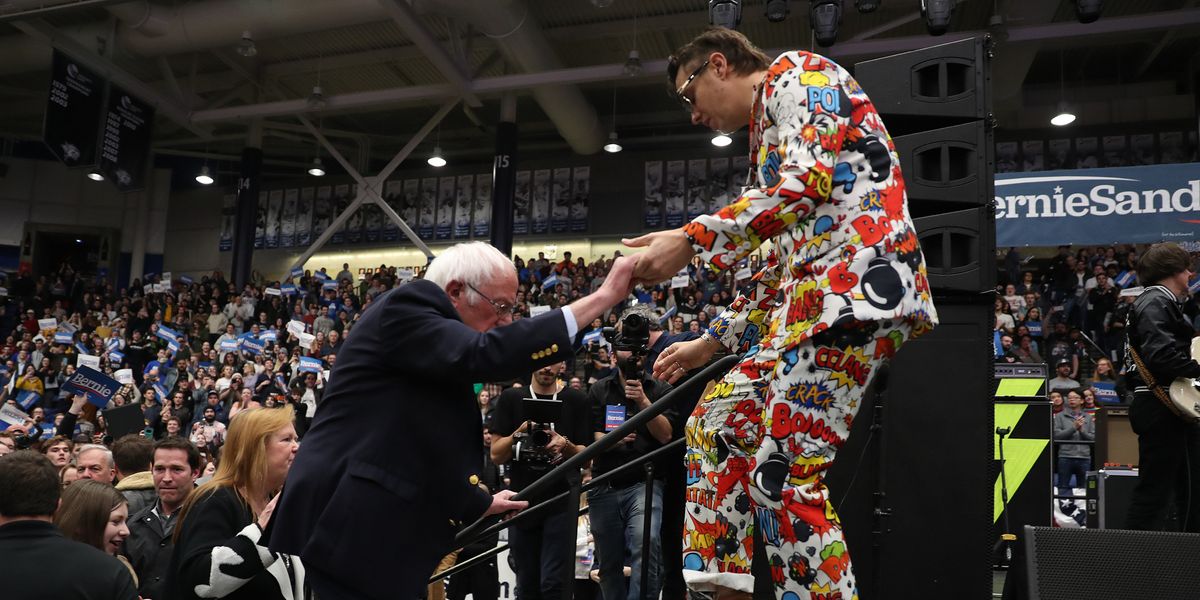 Bernie Sanders emerged from the messy Iowa caucus last week with the popular vote — and the indie one. Following Vampire Weekend's performance at Iowa's pre-caucus rally, NYC rock legends The Strokes caught the train up to New Hampshire to perform at Bernie's primary eve rally in Durham. With Bernie as a co-headliner, and Alexandria Ocasio-Cortez, Cynthia Nixon, Cornel West, Nina Turner and Brooklyn rockers Sunflower Bean opening, it made for a sick bill.

Related | 6 Democratic Reps Weigh In on SOTU, Political Cynicism and the Party's Future

There were a number of notable moments from the night, which drew 7,500 attendees and filled the Whittemore Center Arena. The motley crew of Julian Casablancas (clad in a colorful suit), Albert Hammond Jr., Fabrizio Moretti, Nick Valensi and Nikolai Fraiture embracing the entire Sanders family as they walked on stage was a scene in itself.

In their wide-ranging set, The Strokes covered Talking Heads' "Burning Down the House," surely as a nod to Sanders' fans' hopes for the next congress. They also played two brand new songs, "At the Door" and "Bad Decisions," and announced that their first album in seven years, titled The New Abnormal, is out April 10 (it follows 2013's Comedown Machine).

One particular clip from last night, however, has single handedly made the middle-aged rockers cool again. As The Strokes were closing their set with their classic "New York City Cops," fans rushed the stage (as they are wont to do at a rock show), forming a joyful mosh pit around the band. When uniformed police followed, trying to kick the revelers off stage, Casablancas came face-to-face with an officer, singing the song's final chorus to his face: "New York City cops, New York City cops, they ain't too smart."

It was a poignant moment given the anti-authoritarian bent of the Sanders campaign, of which criminal justice reform and law enforcement accountability are key components. Particularly so, on a day when a clip has emerged of one of Sanders' opponents, ex-NYC Mayor Michael Bloomberg, defending racial profiling and and his administration's stop and frisk policy. Bloomberg was the mayor while the Strokes were coming up in New York City, which probably helps explain their allegiance to Bernie.

The rally also marked a political recoup of the raucous song, which came out on the The Strokes 2001 debut, Is This It. Given its lyrics, "New York City Cops" was removed from the American tracklist, when the release was pushed back following 9/11.

Related | From the Beautiful People Archives: The Strokes, Alfie, and More

Casablancas had a fairly hilarious way of sharing why he's feeling the Bern. While the frontman shared a perfectly lucid statement when the concert was announced ("We are honored to be associated with such a dedicated, diligent, & trustworthy patriot—and fellow native New Yorker. As the only truly non-corporate candidate, Bernie Sanders represents our only chance to overthrow corporate power and help return America to democracy. This is why we support him"), on stage he used pirates as a metaphor for the 1%.

"So I've been super into pirates lately," he bantered. "As one is. As one does. Don't ask. Lot of similarities between the... I'm saying how pirates are the enemies of all mankind. Great fashion sense, but they stole and raped for money. As the people that Bernie is trying to knock out of office! But not...no disrespect to pirates though. Modern businesspeople, way worse. Alright. I'm just fuckin' around, I love y'all, I'm just here for the music."

The New Hampshire primary is today. Find out when your state's primary is here, and make sure you're registered to vote here.