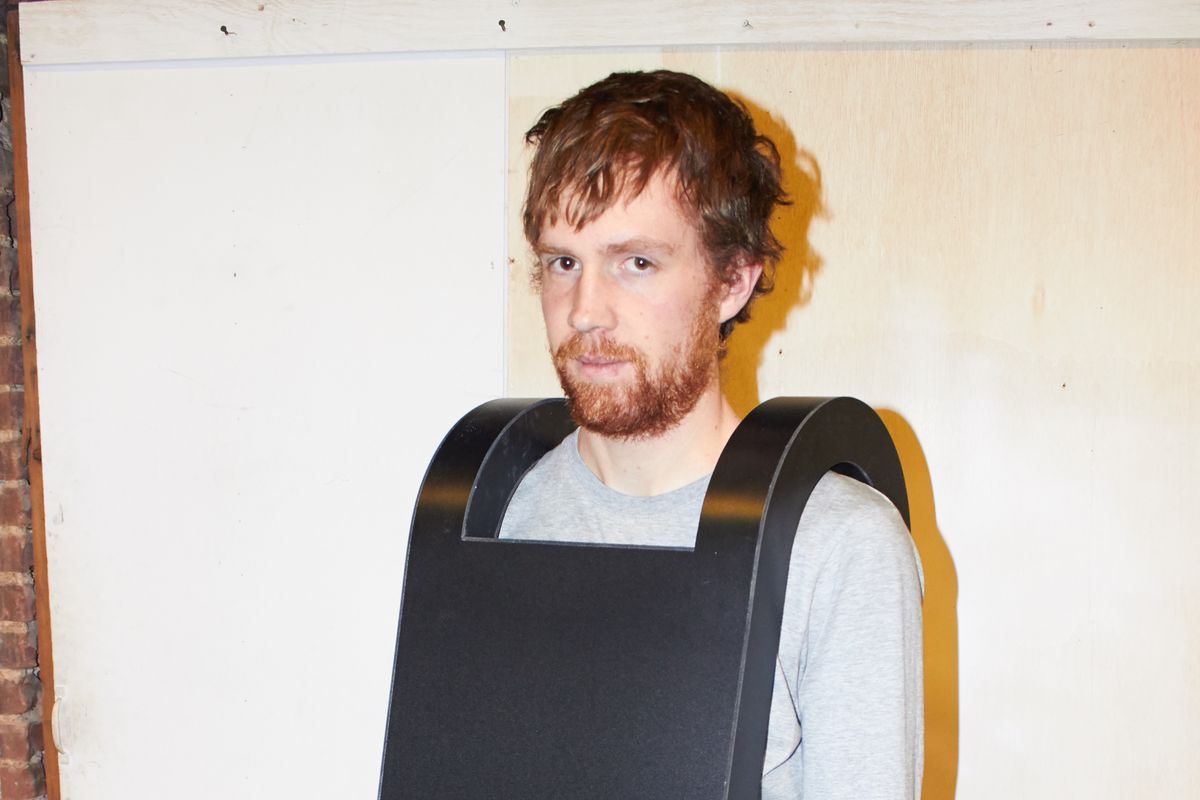 Artist Sam Stewart creates household furnishings that are also whimsical, sometimes absurdist artworks, and will be holding a solo show of his work at Fort Gansevoort this coming spring.

Stewart, in one of his creations

This is always kind of changing. At times it is my studio or riding the train, sometimes walking around the city, but for the most part right now the creative work is happening in my apartment. I only really need my computer to make renderings of new work to send to my fabricators, who I work closely with to realize the final object. I like for the fabricators I work with try to realize the objects as close to the rendering as possible. Inevitably there will be subtle idiosyncrasies that arise from the end product as a result of being hand made. This has become something that I embrace.

When I moved here after college, I built custom furniture and worked as a freelance carpenter in residential and commercial settings. It was a slow start, basically getting jobs through friends and word of mouth, but I absorbed a lot from all of the experienced and talented people that I worked around. During this time I rented a studio and used any extra money from jobs to buy more tools and materials so that with any free time I could realize my own work. If I go way back...my dad is a carpenter and I grew up in an environment in North Carolina surrounded by a lot of people who made things with their hands for a living.

I've just begun an entirely new body of work for my first solo-show upcoming this spring at Fort Gansevoort gallery. In addition to this I'm finishing up two private commissions: one is a custom sofa for a really beautiful apartment that's being renovated in the city; the other is a large circular dinner table for another client. Both of these projects I'm really excited about because I'm finding ways to incorporate new forms and materials into my work. For example, the table legs on the dinner table are cylindrical, wrapped in foam, and covered in a beige-pink colored mohair fabric.

When I was growing up in North Carolina, no adult in my immediate community or family identified as an artist or a professionally creative person. Obviously, that has changed now living in New York, but the thought of being 'successful' as an artist is still a relatively foreign thing to me. In the most pragmatic terms, I think success will mean that my work will continue to improve as I get older and gain more experience. Also, to have my work contextualized among artists whom I've studied and admired would be a pretty good sign, too.

I think that in order to be part of any healthy dialogue the inclusion of criticism is always necessary.

There are no isolated moments of failure that come to mind, I try to keep the mistakes and failed attempts from leaving the studio. But I've definitely made decisions that I regret. Like accepting a job that required a lot of time and attention when I knew that I wasn't truly interested, and my energy would be much better spent somewhere else.

I was watching an episode of Antiques Roadshow, and I wondered if someday some random person will be on the show telling one of the experts about this thing that their great aunt passed down to them...only to realize that this was something I made.

Cliche as it sounds, this is a marathon not a race.

I've wanted to give up at times. The interest other people have in what I do has been more consistent the last year and a half. One example: working with a gallery helps keep things moving along. But before this period there were times when things would be very slow for a month or so at a time. In these slower periods doubts would start to creep in and that's when I begin to question what I'm doing. I'm convinced that it's very difficult to make good work in a vacuum. I'm at my best when I have a lot going on at once.

I'm really never super focused on trends but I'm optimistic about what seems like a renewed interest in historical figures who approached furniture and interiors as art objects. Specifically the current show of Ettore Sottsass at the Met Breuer, and the upcoming fall show of Nicola L. at Sculpture Center. The latter of which I'm really looking forward to because I feel her work is very much under appreciated. It is frustrating to see these dialogues take a backseat to already sanctioned names—perhaps this will change.

My immediate plan is to really lock in this fall and focus on the things I'm currently working on. This has always worked for me, leading to better and better opportunities. I'm a pretty optimistic person, so I try not to dwell on what might set me back in life.

This has been a relatively recent revelation to me. One of my clients is the founder of an influential interiors magazine. When I first moved to New York I was working for an art gallery in Chelsea. I didn't really know anyone and had quite a bit of time on my hands. I would leave work and walk to Casa Magazines in the west village to look at all of the art and design periodicals. I immediately became a fanboy of one particular magazine that came out only twice a year. I would bother the guys at Casa about when the next issue would be in stock; to the point that before I could even open my mouth to ask, they would tell me whether or not they had received an order. I never thought that one of the founders of this magazine that I admired so much would call me up and ask me to design some furniture for his apartment.

For a while, I felt I needed to make this big decision whether to focus solely on furniture design or my art practice. It has actually ended up being a non-decision because I've found a way to do them both, and they inform each other.

I'm up most days by 7:30am. I start a pot of coffee, preheat the oven for a trader joe's croissant, and turn on the Today show or Good Morning America. I don't pay too much attention to the TV, I just find it comforting. I'll often go directly to my desk to plan out the day and respond to emails while I eat and have coffee.

I'm most excited about realizing new work for my show with Fort Gansevoort in the spring of next year.

I got my undergraduate degree in mathematics and philosophy, and one of the things I learned is that it's difficult to come up with a satisfying definition of beauty. This might be the first time I've been called beautiful, and I'll take it.

I'm most proud of my family and friends.