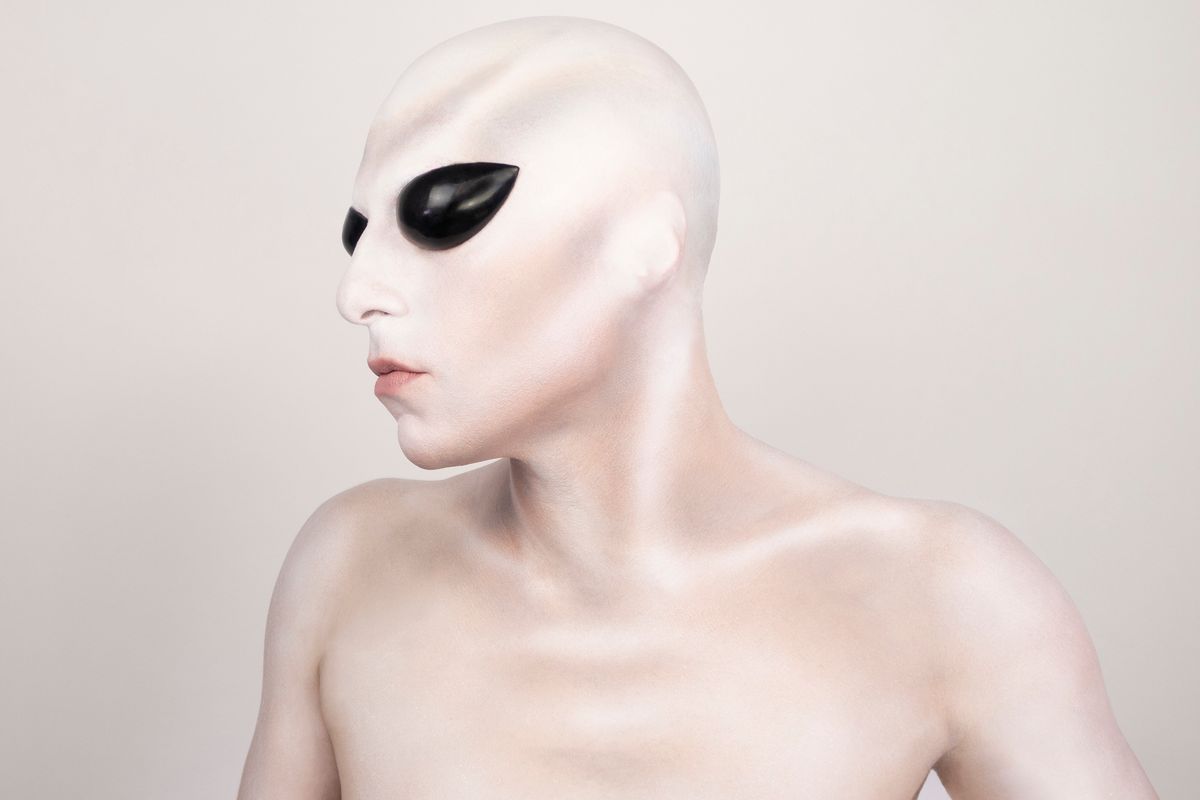 Invade Area 51 With This Beauty Tutorial

Growing up as a teenager in Massachusetts, Andrew D'Angelo would routinely apply makeup on himself as a way to present more androgynous. The makeup artist soon found a small but supportive community of people who introduced him to glamorous rock icons such as David Bowie, and films that focused on drag culture. It is also what set the tone for D'Angelo's current aesthetic that deeply focuses on transformation and fantasy.

"I see makeup as a queer folk art," D'Angelo tells PAPER. "I'm interested in not only the commercial aspects of beauty, like how to help people look their best, but how and why people, in particular queer people, are so drawn to transforming themselves and creating a fantasy."

This unique sensibility came to life most conspicuously in his recent project for beauty label, Lovecraft Beauty, where the New York-based artist (who also did Slayyyter's makeup for PAPER) literally transforms himself to resemble an alien using makeup and a bald cap. "Aliens are the perfect character to represent 'otherness,'" he says explaining the inspiration behind the concept. "We create aliens in our fiction to represent the unknown, the 'out there.' Yet, we still manage to comment on something that relates directly to us in doing so. Aliens are always some sort of metaphor for humanity. That's something I've always been interested in."

In talking with PAPER, D'Angelo gives us a step-by-step breakdown of how he created the stunning look, what beauty means to him, and the power of transformation.

What was the inspiration behind the alien look you created for Lovecraft Beauty?

Lovecraft Beauty is getting into the fall season by doing a series of transformation videos for our YouTube channel. I've always loved fantasy looks and science fiction illustration, and I wanted to push the idea of alien beauty to an extreme. I had made a custom pair of eye pieces in my studio a while ago, and finally found the right opportunity to use them.

What was the process of creating the look and what products did you use?

Firstly, a bald cap was applied, and then a series of thin layers of pigment before the eye pieces were glued on. The contours were a mixture of Lovecraft Beauty's bronzer in shade Cymbeline, and eyeshadow in shade Lucretia from the Eyeshadow Palette vol 1. The white was finished in MAC Cosmetics Pro Performance HD Airbrush Make Up in Pure White. Lovecraft Beauty's Satin Matte Lipstick in shade Fausta was used on the mouth.

How long have you been a makeup artist and what first got you interested in makeup?

I started doing makeup on myself when I was a teenager. It was a mixture of music, queer culture, and art that made me start to paint my face. I wanted to present myself androgynously. I had older friends who did drag and dressed up a lot, and they are still some of my closest friends to this day. They taught me all about the history of the music we listened to and showed me every film and documentary about gay and drag culture.

I fell in love with performers like Leigh Bowery, glam rockstars like David Bowie and death rock icons like Rozz Williams. I also grew up listening to '90s music like Placebo, Marilyn Manson, Nine Inch Nails, etc. When I was 16, I came across one of Kevin Aucoin's books in the local bookstore where I grew up in Massachusetts. I realized then that makeup could be a profession. I think it was all of these things that set the tone for my aesthetic sensibility in makeup. After I moved to NYC in the early 2000s, I really started to push my looks and began to work in nightlife. After that, I started doing makeup professionally.

I think first and foremost, I see makeup as a queer folk art. I'm interested in not only the commercial aspects of beauty, like how to help people look their best, but how and why people, in particular queer people, are so drawn to transforming themselves and creating a fantasy. It's more popular nowadays than ever. All you have to do is look on social media. I think there is a reality that people want to express when they create a fantasy look on themselves. Like Oscar Wilde said "Give a man a mask, and he'll tell you the truth."

So for me, I suppose the message has something to do with telling some sort of personal truth. Designing high fantasy, while striving to achieve it with elegance and narrative. In the case of the alien look for [Lovecraft Beauty], aliens are a perfect character to represent "otherness." We create aliens in fiction to represent the unknown, the "out there." Yet we still manage to comment on something that relates directly to us in doing so. Aliens are always some sort of metaphor for humanity. That's something I've always been interested in.

Definitely my newest favorite lipstick is Lovecraft Beauty's Satin Matte in Drusilla. I'm not just saying that because I am the Beauty Director for the brand, it really is the ideal cool toned red. I use it all the time. It also seems to be a fan favorite. Also, as a professional on set, Lovecraft Beauty's Bronzer palette is a definite go-to. Everyone can use those colors somewhere on their face. For complexion, it's all about NARS for me. I love their tinted moisturizers and concealers. When I need bright color creams, the MakeUp Forever flash palette is a must-have.

What does beauty mean to you? How would you define your aesthetic?

Beauty is subjective. When we use the term in reference to makeup, it's the manner in which we adorn and transform someone's face. Everyone has their own beauty, the best of us have it on the inside, and it shows in our character and how we present ourselves.

When I do makeup, I want to make sure that the design is beautiful, meaning that the lines and colors are applied well and that they suit the model's bone structure, skin tone etc. I also want the makeup to bring something out of the person. Whether it's about complimenting their personality, or provoking an entirely different character or mood. I think that when all of these things come together harmoniously, that is truly beautiful.