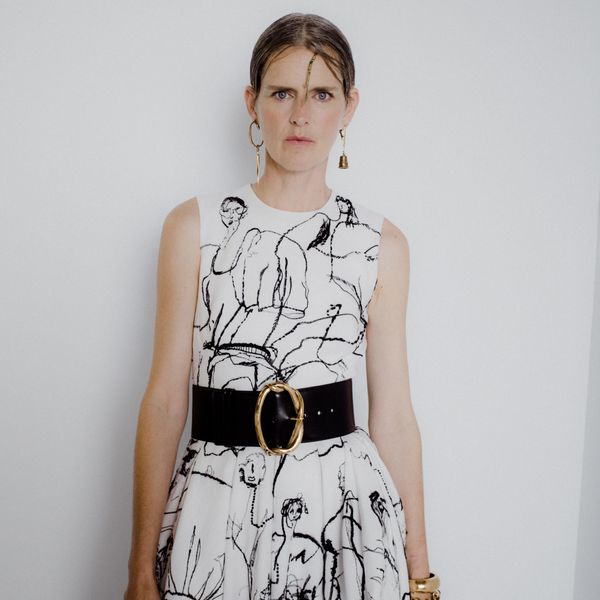 See How Alexander McQueen Brought These Students' Sketches to Life

Some lucky design students at Central Saint Martins got the opportunity of a lifetime last year when Alexander McQueen enlisted their help to contribute in the making of its Spring 2020 collection.

Worn by British model Stella Tennant, the white sleeveless midi dress featured abstract line motifs of "dancing girls" that were drawn by the aforementioned students. (All of their names were credited in the show notes.)

Alexander McQueen gave PAPER a behind-the-scenes look at the making of this dress. The students' dancing girl sketches were done on long white sheets during a life-drawing class led by Fashion Illustrator Julie Verhoeven at the brand's flagship store in London.

Afterwards, Creative Director Sarah Burton enlisted the entire McQueen staff to hand-embroider and stitch over the sketches of a single ivory linen dress.

The Stitch School, a group that fosters community through needlework, provided the teams in London and Paris with specialist tables and looms so that every single person could contribute in the making of this look.

Tennant's dress went on to inspire the dancing girls embroideries in another look in the collection: a blue linen dress with an open neckline and short, bulbous sleeves.

Between the school kids and her entire staff collaborating on this dress, it all amounted to the sense of community spirit and togetherness that Burton championed this season. As she wrote in her show notes back then, "I love the idea of people having the time to make things together, the time to meet and talk together, the time to reconnect to the world."

You can view and shop the entire Spring 2020 collection on the brand's website.