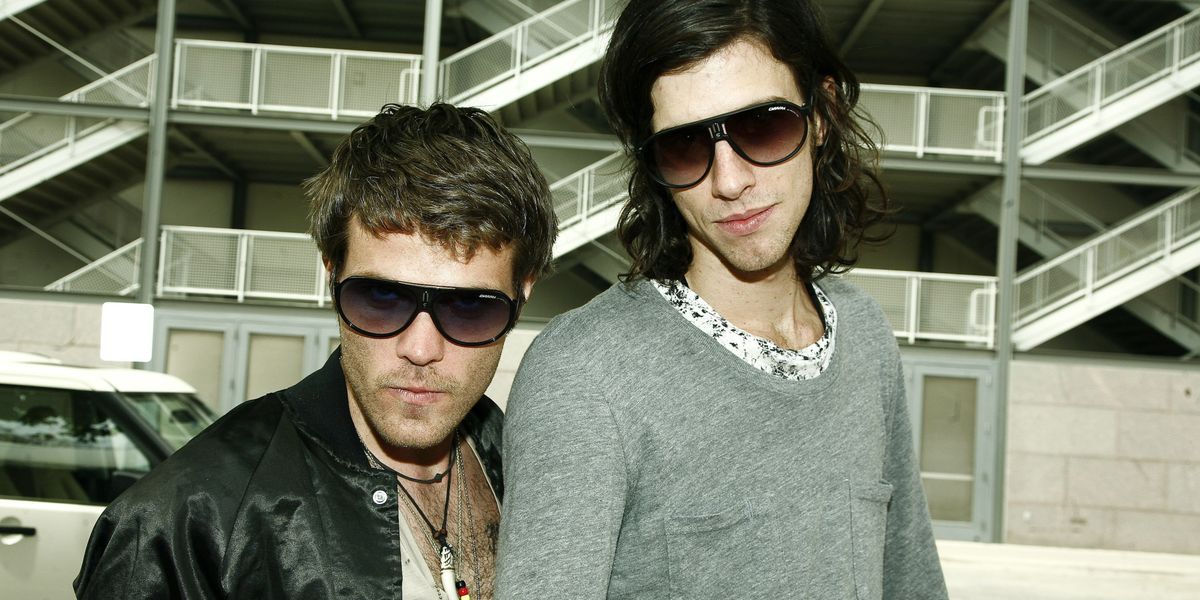 Few things are as 2009 as 3OH!3. The electro-pop duo, composed of Colorado natives Sean Foreman and Nathaniel Motte, rose to fame on Myspace, wore skinny jeans, and performed on Warped Tour. Their two breakout singles, "Don't Trust Me" and the Katy Perry-featuring "Starstrukk," were party anthems for scene kids. A long decade later, they're as of-their-time as QWERTY keyboard phones and side bangs.

So what do they think of the increasing nostalgia surrounding the Myspace culture that made them famous? Motte and Foreman still perform together, playing at 2018's final-ever Warped, and touring to commemorate the anniversary of their breakthrough album Want. In the spirit of the 10-year challenge and #20ninescene, PAPER caught up with Motte to talk Warped Tour, Katy Perry, and doing the Helen Keller.

We were really fortunate in that 3OH!3 started so organically, it was just an outlet for Sean and I to have fun. Initially we wanted to rock parties for our friends in Colorado, and make music that was high energy and fun and inclusive of a lot of different genres and styles of music. And be inclusive of a lot of different people, from a lot of different backgrounds and musical backgrounds. At the time Myspace was so revolutionary as a music form. It created such a cool level playing field, and we take it somewhat for granted now, the amazing fact that we have access to so much music. It can be overwhelming now, but at the time it was so incredible for us to have that — to connect with our buddies and people in the music scene in Boulder. We started touring and our first real tour was Warped. It was really incredible.

"At the time Myspace was so revolutionary as a music form. It created such a cool level playing field..."

As a band you definitely never seemed to take yourselves that seriously.

I guess we never saw the line between serious and non-serious music. We definitely never took ourselves that seriously, just wanted to make the shows as fun as they could be for people coming out. Honestly one line that explains our music is that we're serious — about having fun. A song like "Don't Trust Me" is very obviously comedic and has comedic elements.

Let's talk about "Don't Trust Me." Do you regret any of those lyrics? The Helen Keller line — do you think that would fly in 2019?

Yeah I don't know, probably not! I do remember recording that song, we'd just done a really small indie deal and we didn't know that anybody would listen to it. We were just excited to be in a professional studio. And we came up with this really funny line and we were worried about whether it would offend people, but it was like, no, man — it's funny. People will get that it's tongue-in-cheek. In retrospect if we'd known that many people were going to listen to it maybe we would've thought more about it, but that's kind of the beauty of what we did and I think people understand that. Even more so today, when we're facing so many serious issues, it's important for music to have fun and put smiles on people's faces. As far as 3OH!3 and our artistry is concerned, that's one of the most important things. Let people have fun.

The video for that song is truly crazy.

Yeah, being fun and weird is something we take pride in. I can remember that was the most tired I've ever been after that video shoot, we were just going crazy for 16, 18 hours. I'm not sure if there was a concept, really, it was so chaotic and all over the place. Just the raw energy and the raw strangeness.

Were you partying a lot at the time?

When we first launched our stuff and were in that scene of music, it was an interesting time for me, actually — I was gearing up to go to medical school right after Warped Tour. But we got a couple weeks into the tour and thousands of people were coming to our shows and singing our lyrics back at us and I asked for a year of deferral. The university very generously gave me four consecutive years of deferrals. It was a strange and awesome experience for me, I'm so happy we pursued music and turned it into a career. At the time we were so blissfully ignorant of a lot of stuff. Back then in the quote unquote scene, our music didn't necessarily align with the Warped Tour sound but we were able to carve out our own space. It was so supportive.

It's easy to forget that you were on Warped Tour with Katy Perry, who you collaborated with for "Starrstrukk," which also has one of the strangest music videos of all time. How did that come about?

Touching on Warped, it was such a launching pad for artists you wouldn't necessarily expect. With Katy, we'd spent a whole summer with her on tour. This was right when "I Kissed a Girl" came out, so her career really launched and grew so fast. We wanted to collaborate with her and had the opportunity to do a remix of our song "Starstrukk" and it was so cool. She's been a good friend over years, on top of being an amazing singer and amazing artist she's a fun and great person. We actually went on tour with her in Europe on her first tour and had a lot of fun.

The ethos of the tour as a whole was so great, providing a place for young people to go, an affordable music festival. Every band would do a meet and greet every day. Breaking down those walls was important for us because we're just regular fucking people, you know?

In the next phase of your career you worked with Kesha, which must have been cool too.

That happened through a friend of ours Benny Blanco, who was our producer back in the day. We did some songs with him and Dr. Luke. He'd just signed Kesha and was like, "You guys should do a feature with this person." And we met Kesha and she's amazing, so full of energy, such a great artist and a great person. So a friendship definitely evolved as well as a collaboration, and we're so lucky to have done that with Katy and Kesha. Artists like Lil Jon, too.

Did you ever talk to Kesha about the Dr. Luke lawsuit?

I didn't. I think she has enough on her plate on that side of things.

I assume you wouldn't have had any idea that that stuff was allegedly happening.

No, we didn't. We had our own experiences with Luke that weren't great. As an artist at the time you had to take the ups and the downs and try to get through them.

People have so much nostalgia for that MySpace era. You just did a 10-year reunion tour. Why do you think people have such affection for that time?

The music you grow up with in your early teens, middle school and high school, it's a very formative time in your life. We consider ourselves fortunate that we can be part of that renaissance, that rebirth of that stuff. It was so fun to get back out on the tour and revisit those songs and relive those times, chat with people one on one about where they were. We've met a lot of people who met their husband or wife at a 3OH!3 show 10 years prior. It puts things into perspective, when we were on the tour we were just concentrating on trying to make it fun and trying to make it inclusive.

Is there new 3OH!3 music in the works?

Yeah, we are working on it. We do a lot of songwriting and producing for other artists and we're trying to work on new stuff too. These days for better or worse we're more discerning about what we put out but you know we still play a lot of shows and did a lot of touring last year — that last Warped Tour last summer, shows at universities. There's no sign of stopping.