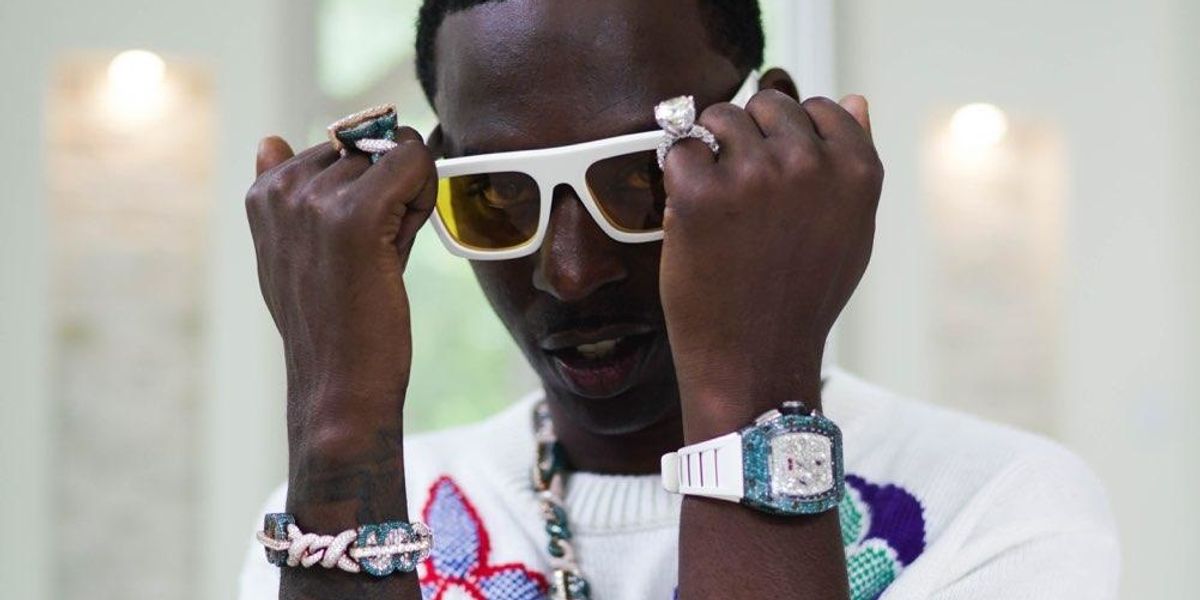 Before this weekend, one lucky fan of Young Dolph will own his ocean blue and tangerine-colored Lamborghini Aventador. He's giving away the car, which currently retails at $417,826, as a promotion for his new album, Rich Slave; on the cover you'll see a cartoon version of the artist inside of the vehicle, pulling up to a red carpet. This isn't Dolph's first time giving away a luxury vehicle. In 2018, a contest winner received a camo Dodge Challenger Hellcat for making the best video to his song "Major."

"I just wanted to show my fans some love," says the 35-year-old rapper over the phone about his latest giveaway. "It really lets them know that I love them just as much as they love me. They've been showing me this love throughout my career and I want to show them that I appreciate it." I wonder aloud if he'll miss the flashy ride and, almost immediately, he says no. "I'm going to be happier knowing that someone else can be in the car and enjoy it."

Throughout the course of his career, Dolph's game has always been about enjoyment. He started rapping after a series of traumatic experiences in 2008 that involved nearly dying in a drive-by shooting and his grandmother passing away from lung cancer. After the success of his debut project, Paper Route Campaign, Dolph became established in Memphis as a baritone-voiced lyricist who could be the life of the party.

Over the past 12 years, Dolph has lived up to his reputation — and he's done it on his own terms. Every one of his seven albums that have been released — King of Memphis in 2016, Bulletproof, Tracking Numbers with Berner, and Thinking Out Loud in 2017, Role Model in 2018, Dum and Dummer with cousin Key Glock in 2019, and now Rich Slave in 2020 — have come on his independent label, Paper Route Empire.

Rich Slave is the kind of adventurous LP that you make when you have full artistic autonomy. Dolph says that half of it was recorded prior to the pandemic, and then the lockdown "forced him to be more creative" with the rest. "I had fun with all aspects of it, trying to give people a real reason to check it out," he says.

There's always a reason to listen to new Dolph, but this album has an added social context, inspired by police brutality, racism and a new wave of Black Lives Matter protests.In a press release , Dolph said that Rich Slave's title came from "the reality of being Black in this country." "You can have money, and you can be a benefactor and a leader in your community, but all people see is Black skin," he wrote. "All the bullshit I heard about as a kid, we still face in today's time. Over the years, they have given us a little bit of freedom, but it's only a temporary pacifier."

Rich Slave's title track actually predates this year's events. "I recorded 'Rich Slave' at the end of 2018," Dolph says. "When I got ready to name the project afterwards, I was looking at the tracklist. I figured that it would make sense to name it after the song, especially with what's going on right now in the country." Despite his status, he's been as affected by police violence as much as anyone. "I wanted to tie it in, to say that just because someone's successful and has some money, they aren't exempt from these kinds of situations involving the police. There ain't nothing special about my life that's different from the experience of someone living in middle class Alabama, Michigan, or Texas. We are all the same."

Dolph's experiences have shown him firsthand how police can discriminate against Black people. "I can go back home to Memphis, head to my aunt's house in the hood, and the police will pull up and fuck with me — for nothing," he says. "It's happened many times. Whether it's at my best friend's house or anyone else that I know, they act like I'm not supposed to be there. I can't act like I don't know what it is. I know why they're doing it."

Another Rich Slave track, "The Land," puts this pain into words. "They say this is the land of the free/ It seems like the land of bullshit to me," Dolph angrily raps on the chorus. In its first verse, he recalls a dangerous confrontation with an officer that will freeze the air in your lungs. "The police pulled me over for nothing, just because she was racist/ Two minutes later, it's five police cars, they got me face down on the pavement/ Just because I'm a Black man in America/ That's what gives them permission to treat us terribly."

As anxiety-inducing as it is for the listener to hear this ordeal play out, it was harder for Dolph to experience it. "Certain stuff is being brought to the light and these situations need to stop," he says. "I'm speaking out for a lot of people that aren't artists or musicians. People don't realize that this is our real life experience and that we're continuing to go through it. When you think about how many people have also been in those situations that went left, it gets real."

There's a balancing act at play on Rich Slave that comes from figuring out how to have fun with such a serious, and important, subject matter. Megan Thee Stallion appears on the booty-bouncing "RNB," a high-octane flex fest between the two rappers and their barking wallets. Produced by Juicy J who he says "has the perfect sound" for him, Dolph was excited for Megan to be featured. "It was a song that I'd been working on for some time, but I sent it to her," he says. "She's so hard and I felt like the girls would really like it because I haven't worked with a woman in awhile."

Rich Slave is the culmination of Dolph's lengthy journey in the industry that delivers an important message about the experience of Black people in the United States but also knows how to have fun in such serious times. To think that he's still around and growing, with more than two million monthly listeners on Spotify around the world, in a genre that traditionally doesn't have the best record for longevity, is a testament to not only the power of his music, but also the grind that it took to get here.

"I wouldn't change anything that happened to me because everything that I've gone through, taught me how to do what I've done," he says about the journey. "I'll never take away the long nights where I got no sleep, the hard work, the sacrifices — without that stuff, I wouldn't be here." But Dolph wants to be clear, there's also his innate talent that continues to make fans look out for his music — and any luxury vehicles he might be giving away. "You either got it or you don't," he laughs. "I got it."