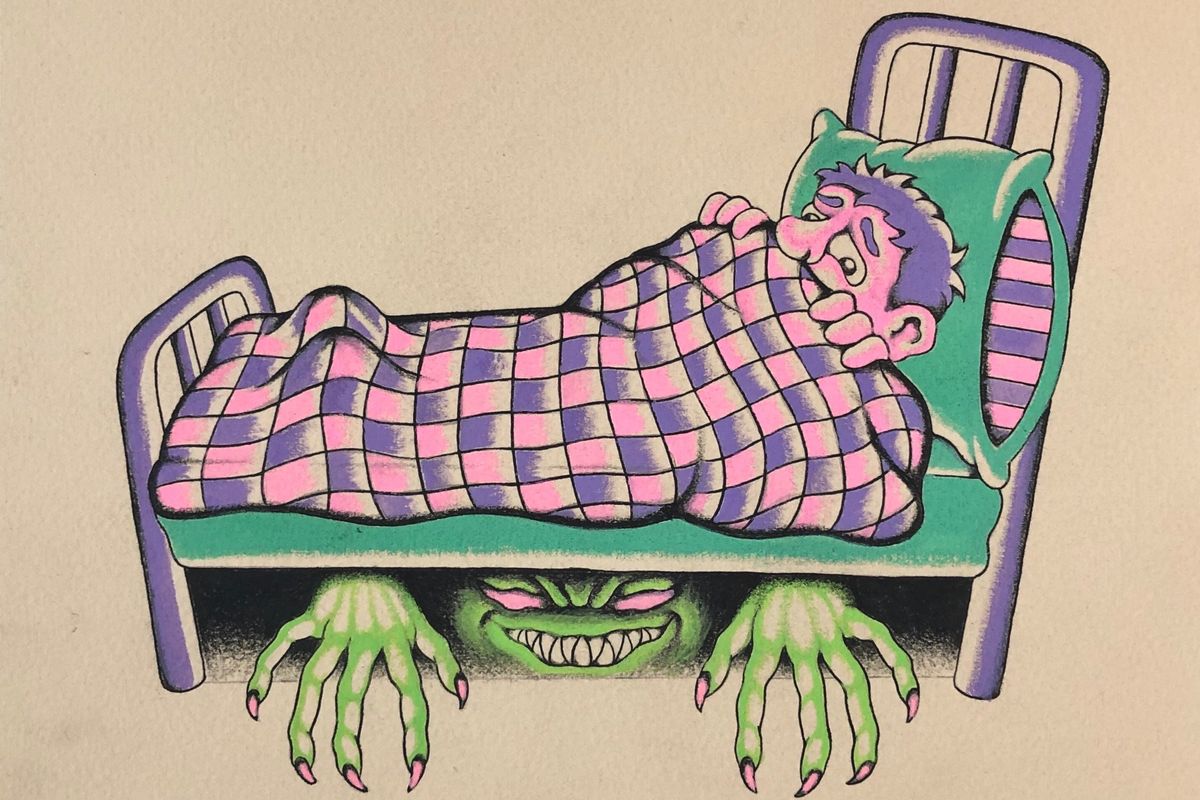 You probably haven't finished your quarantine magnum opus yet, and that's OKAY. But some unrelatable artists are finding the times inspiring. NYC gallery WHAAM!, founded and run by Anatoly Kirichenko, is providing a platform for those who've been creating works while isolated during the coronavirus pandemic. The gallery invited multimedia artists around the world to participate in a virtual group exhibition called "Home." According to a bio for the exhibit, "home" is to be "openly interpreted as feelings of familiarity, a place of physical solitude or ground of new creativity and documentation."

The works are as varied and chaotic as your mood has probably been lately. Some are literal, displaying familiar sites: the bed, the kitchen, the view of a grocery shopping cart. Others are more enigmatic.

Today, PAPER shares 18 of these "Home"s works by 15 artists. WHAAM! will be rolling out additional works included in the show each day on their Instagram until April 17. Most are for sale and the portions of all proceeds will go towards Bowery Mission, which is providing shelter, programs and to-go meals for vulnerable New Yorkers during COVID-19.

Alex Petty (b. 1988 in California) is an illustrator and tattoo artist who has been practising tattoo for the past seven years. Petty started his career working at a street shop in San Francisco's Haight ashbury district for five years before moving to New York. Petty debuted his illustrations at WHAAM's Driving Forces Group Exhibitions in 2019. Petty currently lives and works in Brooklyn, New York. @alexpetty

Brie Moreno (b. 1994, Ottawa) has been exhibited at Printed Matter in New York as well as at the Galerie du Jour - agnès b in Paris. She has worked with Art Gallery of Ontario, Bloomberg Businessweek, Novembre Magazine, Lagon Revue, and Breakdown Press. Brie currently lives and works in London. www.briemoreno.com/ | @boogerbrie

Carolina Lindberg (b. 1991, Madrid) is a Spanish interdisciplinary artist and designer based in London. Her work is formed by self-made imagery and a language full of codes expressed through digital creation of images and textile installations. Each project is composed of a series of feelings, points or denounces. From a contemporary subjective point of view, approaching themes such as the situation with women currently, the limits of freedom or the moral between good and evil amongst others. Her artistic career is tightly linked to the fashion and music industry. She has exhibited her work in European cities such as Madrid, Brussels, London, Milan and in L.A in the States. @carolina__lindberg

Handmade stencil, acrylic and airbrush on canvas board, 12 in x 24 in

Devin Beck (b. 1997, Houston, TX) is a self taught artist who specializes in painting nightmarish hellscapes in acrylic, using traditional brush application as well as airbrush. Developing new styles, advancing technique and seeing her work evolve is what drives Devin to spawn new artwork. She was born and raised in Houston where she was exposed to work by Yves Tanguy, Rene Magritte, and Dalí. These icons resonated with her at a young age and she would later draw inspiration from them for her dark-surrealist style. She finds solace in her isolated landscapes and a therapeutic relief in creating these desolate spaces. Beck currently lives and works in Austin, Texas. @d3v1n__

Aeja Monet (b.1995, Washington State) is an artist who primarily works in colored pencil illustrations that are surreal utopias crafted from actual life experiences and an interest in animation. The artists work plays on the whimsy and unexpected. Recent exhibitions include: Playdate group show, New Image Art, LA. No Time Like The Present group show, WHAAM! New York. @aejaduke

Chito is a self-taught and unconventional artist and designer based in New York and Mexico City. Inspired by a life on the road and the characters he crosses paths with during his travels, he uses airbrush and its myriad connotations to create a subversive and evolving body of work that has been featured in cities across the world - including Mexico City, Vancouver B.C., Tokyo, New York, & Paris. His 1-of-1 fashion arm, CHITO BY SANCHEETO, has led to a collaborative collection with Supreme New York. His upcoming exhibition at Lagos in Mexico City – February 2020 – will be his first solo exhibition ever and will focus particularly on his artistic practice. @chitobysancheeto

Hank Reavis (b. 1997, Seattle) is a multimedia artist, primarily working with airbrush. His paintings are reflective of his surroundings and upbringing in Seattle, as well as his impressions of popular culture in America. Reavis' work bears a distinctly-young identity, as it is heavily influenced by the internet and technology; tapping into a form of emotional and visual communication that resonates strongest with his generation. Reavis graduated with a BA in Studio Art from Western Washington University, and currently lives and works in Seattle, Washington. His paintings have been shown in Seattle, New York, Miami, and Tokyo. @hankreavis

Justin Hager is a self-taught artist living and working in New York. Hager's illustrations and paintings draw inspiration from his childhood and blend the concept of nostalgia with images and memories of pop culture. Hager grew up in the small town of Bakersfield, CA. His formative years were spent skateboarding, hunting at thrift stores, listening to records, watching 80s and 90s movies and eating fast food gimmick items. All these things—this mixture of angst, fun, rebellion, and hope—inform and inspire his work. @justinhager

Michelle Guintu Petty (b.1982, San Francisco Bay Area) holds a Bachelor of Fine Arts. Her work can be presented in contrasting ways, i.e. line drawings, pop culture paintings, or paper mâché dolls, while still holding her childlike essence. Michelle has had two solo exhibitions at the New Image Art Gallery in Los Angeles, a duo exhibition with Joe Roberts (LSDworldpeace). She has also shown in multiple group exhibitions such as one curated by Barry McGee at Cheim & Read in New York, another curated by Shepard Fairey at Subliminal Projects in Los Angeles, and lastly a group exhibition at Galerie Wolfsen alongside Justin Hager in Denmark. Her work has also been shown in Juxtapoz magazine. Michelle currently lives and works in New York. www.michelleguintu.com | @michelleguintu

Nick Atkins is a New York based multidisciplinary artist who works in the form of studio based art practice including painting, collages, sculpture, and video. @electromagnetic_studios

Ronan McGee is a Toronto-based graphic designer and illustrator who works primarily around sport related themes. His works leverages 1900s ephemera to produce gritty yet familiar imagery, digging for old printed material references and using methods of photocopying, printing and scanning. There's an ongoing effort to replicate the textures he sees in them - the stippling, half tones and little imperfections from the printer. McGee now lives and works in @ronanmcgee

Sharpie, colored pencil and charcoal pencil on paper, 8.5 in x 11 in

Robert Brackett is a Brooklyn based artist of Jamaican descent. Being that he is the only member of his family born and raised American, his works focus on the theme of identity and self-image. @iiightson

Shana Sadeghi-Ray (b. 1987, Boston) is a multimedia artist who studied fine art at the University of Massachusetts, Amherst. Her work highlights the rituals of object worship upon which society is based. Her kitsch, shrine-like installations and her magazine cut-out collages pinpoint the ways in which we assign meaning to the things we consume, whether that be trinkets, stuffed toys, clothing or entertainment. Shana is currently based in Brooklyn. @scorpioincharge

Chris Lloyd, "Clownin On Ya Bitchass"

Chris Lloyd, "Facts That Will Blow Your Mind"

Chris Lloyd, "When The Poop Goes In Your Mouth"

Chris Lloyd, "When You Have Gangrene You Chop O..."

Donate to the Bowery Mission here.