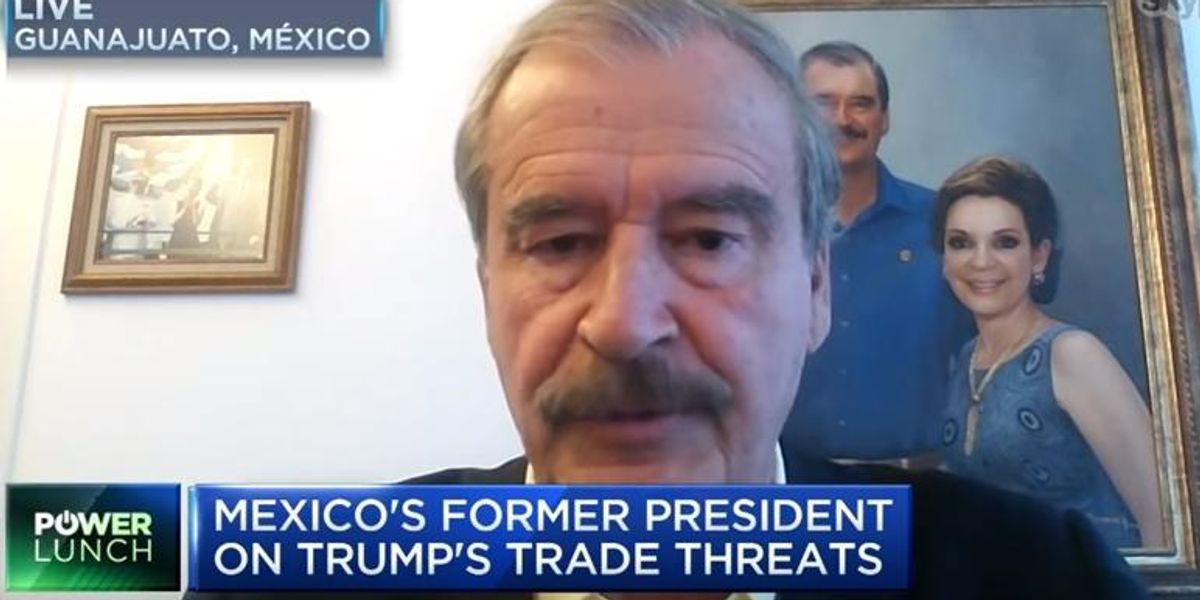 Vicente Fox Keeps Dragging Trump On Twitter And It's Everything

Some retirees spend their golden years playing golf or drinking piña coladas in Cabo -- that is, unless they're former Mexican president Vicente Fox, who seems to be dedicating a significant portion of his free time to trolling Donald Trump on Twitter.

Using Trump's own preferred platform of communication, Fox has been sending a non-stop stream of fact-driven, expletive-laden tweets that call out Trump's hypocrisy and inadequacies on a number of issues. And, unsurprisingly, a good portion of his tweets have gone viral. He even made the #FuckingWall tag trend worldwide yesterday

Sean Spicer, I've said this to @realDonaldTrump and now I'll tell you: Mexico is not going to pay for that fucking wall. #FuckingWall
— Vicente Fox Quesada (@VicenteFoxQue) January 25, 2017

I demand a national registry of all Trump voters so we know who to bill for this #FuckingWall
— MeanOlLiberal (@MeanOlLiberal) January 26, 2017

"I understood Hitler, I understood Napoleon, I understand a lot of very violent ones. This one I don't understand," Fox told Buzzfeed News earlier this month, adding that he, "uses power to fuck people."

So the solution? Heckle the shit out of him -- and, boy, is he good at it.

Today we turn into an era of uncertainty. If Donald the Unready doesn't learn to behave, the rest of the world needs to come together.
— Vicente Fox Quesada (@VicenteFoxQue) January 20, 2017

Neither today, nor tomorrow nor never Mexico will pay for that stupid wall. If Trump wants a monument to his ego, let him pay for it!!
— Vicente Fox Quesada (@VicenteFoxQue) January 11, 2017

Do not be afraid of Trump, he's a bully and a bluff, bullies end when they're called out. America, stand out before it's too late!!
— Vicente Fox Quesada (@VicenteFoxQue) January 11, 2017

Then again, it comes as no surprise, as Fox is widely considered to have been one of Mexico's most charismatic presidents, meaning he's good at knowing what people want to hear about and cheer for. Combined with the fact that Mexicans-at-large have been the target of much of Trump's blatantly xenophobic policies and rhetoric, and Fox's determination to drag him to hell makes a lot more sense.

Even though, @realDonaldTrump is not the prettiest gal in the room, we still have to dance with her and find a way to work together.
— Vicente Fox Quesada (@VicenteFoxQue) November 9, 2016

This's beautifull Marta my love! its birthday.What do you know about Love? Or you just know about hating . How sad! pic.twitter.com/KlYelfyI39
— Vicente Fox Quesada (@VicenteFoxQue) April 9, 2016

@realDonaldTrump's ego monument real cost is around 25 billion USD. I ask you, America, what would you prefer instead of that #FuckingWall?
— Vicente Fox Quesada (@VicenteFoxQue) January 26, 2017

However, it's also worth noting that Fox's criticism has been side-eyed by leftist Mexicans, who point toward his less-than-effective political track record, as well as his inability to deliver on his promise to eradicate corruption.

"This is the perfect psychological projection," Virgilio Caballero, a lawmaker from the left-leaning Morena party, also told Buzzfeed News. "He turned out to be as much of a liar as he says Trump is."

Even so, it looks as though some of his comments have gotten under Trump's skin. Fox also claims that Trump's team have reached out in the past to arrange a meeting between the two, though Fox said he declined the invitations and reportedly responded, "The answer has always been the same. Behave yourself."