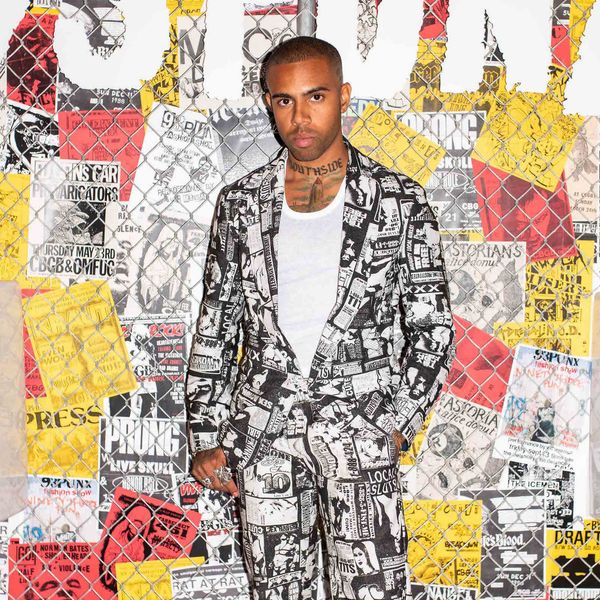 On Friday the 13th, 26-year-old rapper and activist Vic Mensa threw a party on the Lower East Side to celebrate the launch of his new clothing line, 93PUNX. It's named for his punk band, which just dropped a Travis Barker-produced album and performed at the event. The clothing line consists of one-of-a-kind upcycled vintage garments, reconstructed in Mensa's favored punk style, an homage to designers like Vivienne Westwood and Malcolm McLaren. The lookbook, premiering exclusively on PAPER, features a recreation of legendary rock club CBGB's bathroom. CBGB is now a John Varvatos store. New York — it's dead.

"93PUNX is the creation of myself and Conrad Muscarella, who does all the construction and production of the pieces. Our inspiration comes from street culture of all forms," Mensa told Hypebeast. "From punk to graffiti we draw inspiration from the things we see and the places we go. The process begins with the vintage pieces themselves. We look for garments that have had a life before us and give them a rebirth."

Muscarella, who has worked with Mensa on a number of custom festival outfits, repurposed leather jackets and military parkas, adding patches and studs and pins. Patches include slogans like "NOT FOR SALE" and "SEX FIEND." Patchwork, plaids, and leopard print abound. One jacket features an illustration of a swastika with a line struck through it, a clear rejection of the creepy skinhead culture that can creep into certain segments of the punk scene.

"I think that the ethos of punk is, to me, radical individuality," Mensa told Hypebeast. "Being passionate about things that really matter, not being afraid to express yourself outside of conventions, stereotypes. I grew up skateboarding so I've always felt like a kindred spirit, it's informed my whole life, from the politics to the clothes, to the way I carry myself."