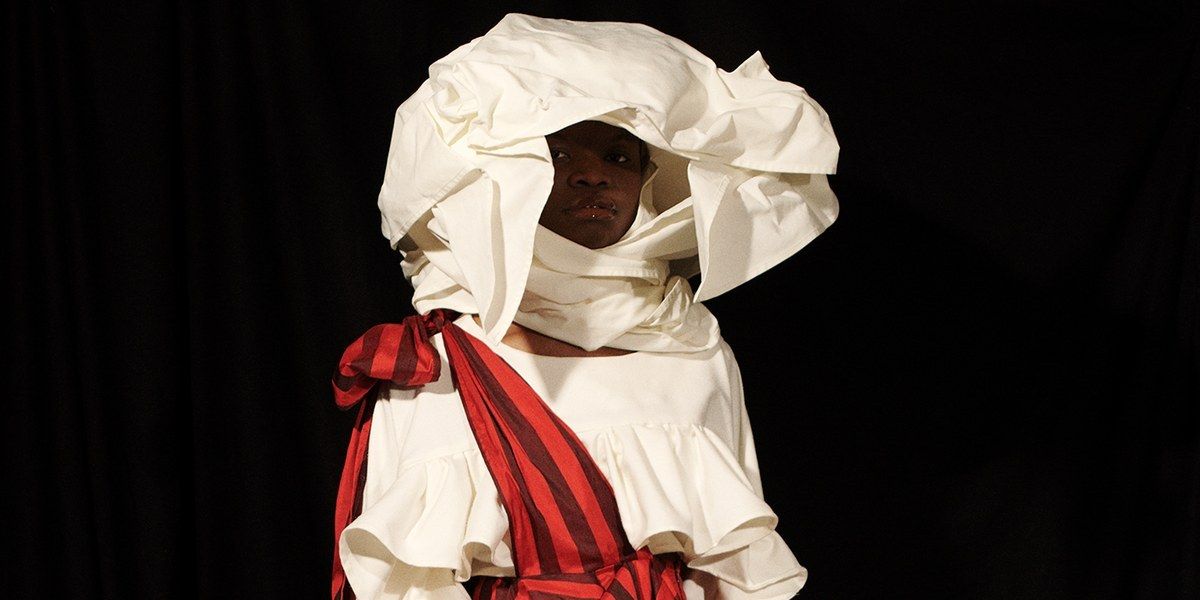 The 21-look runway show was staged at the Angel Orensanz Foundation in the Lower East Side — famously known for hosting Sarah Jessica Parker's wedding to Matthew Broderick in 1997. The location was perfect: a slightly eerie vast open space with excellent acoustics for the warped soundtrack (courtesy of DJ Bebe) that soundtracked the show. Of course, Vaquera has always had an affinity for the atypical when it's come to location scouting, having shown inside a subway station and at Chinese-restaurant-cum-party-space China Chalet for past shows.

The pairing between The Handmaid's Tale and Vaquera made perfect sense. With their embrace of quasi-Victorian excess, Vaquera's aesthetic fit neatly alongside the pilgrim-inspired fashions favored by Ane Crabtree, The Handmaid's Tale's costume designer and a model in the show. Vaquera's Fall/Winter 2015 collection even spotlighted bonnets as the go-to accessory of the season. (Naturally, bonnets popped up again at last night's show.)

Casting came courtesy of Midland, the buzzing new independent agency run by Walter Pearce and Rachel Chandler. Known for scouting out non-traditional models, it was no surprise that Midland Agency was booked for the job. After all, Vaquera has always been known for looking to their immediate circle of cool friends as inspiration for their designs. When asked what they look for in a model, David Moses replied, "It's all about finding personalities, because once you put clothes on these people, they become something different."

The personality of these models certainly shined through. As they stomped around a raised white platform wearing pointy-toe crakows made from red leather, the models exhibited an air of confidence that juxtaposed nicely against the somewhat restrictive clothing. Following the "loose instructions" given to the them by choreographer Remy Maelen, each model approached the center of the raised platform only to aggressively push the person currently standing there away — a decision meant to display the act of "asserting their identity and their space by saying, 'This is my time in the spotlight,'" according to Patric DiCaprio.

Some even took that concept farther. One model, Jada, wearing a "droop bra" ferociously swung the excess fabric in a windmill-like fashion, and frequent Hood By Air model Hirakish, who had been holding flowers that conveniently obstructed his face, vigorously ripped the bouquet up and threw it out into the audience immediately after taking his final stance.

If nothing else, the Vaquera x The Handmaid's Tale collection was a clear testament to the magic that can be produced by young creatives who are given the proper financing and support. Moses informed me that the Vaquera team was approached by Dena Yago — formerly of K-HOLE, the trend forecasting collective behind "normcore" — who used to share an office space with them when some of the Vaquera designers were working for Eckhaus Latta. Yago, who now does "cool social-marketing" for brands like Hulu, organized the collaboration and granted the team "full creative control—which was crazy."

This was all back in October, and the four designers have been conceptualizing the show ever since. The team started the physical design work in February, immediately following the staging of their equally fascinating Fall/Winter 2017 show.


As expected, the clothes were glorious and the clear star of the show. Many of them exhibited an elevated level of polish that separated this showing from some of the brand's previous collections. Even the more experimental looks (because would it even be a Vaquera show without them?) were designed with finesse using fabrics worthy of a production this grand. Pillows that connected to make an "upholstered dress" were made from ornate satin; a look based on a "fabergé egg" bounced alongside the wearer; and a piece made from connected cone-bras was worn over an airy chemise in noticeably delicate silk.

The collection was also incredibly referential — one model peeled oranges while he stood as an ode to the fascination the show has with that particular fruit, while another came out carrying a stack of books atop his head as a nod to the fact that the women of Gilead (the fictional country where The Handmaid's Tale is set) were forbidden from reading — but still decidedly Vaquera, which was something Bryn Taubensee cited as being incredibly important.

But even with the feeling of oppression looming over these clothes, there was something else about the show that was oddly celebratory. Claire Sully told me that, as "weird outcast kids," she and the other designers "often talk about things that are kind of dark" and wanted to use this opportunity to start a discussion about "this individual who just isn't very privileged and welcomed into society." But because they also want to celebrate the community from which they come, the team still feels the need to always imbue their clothes "with some element of hope."

And with the designers saying they are open to similar collaborations in the future ("depending on the message," of course), we are very hopeful. Very hopeful, indeed.

All photos courtesy of Michael Hauptman