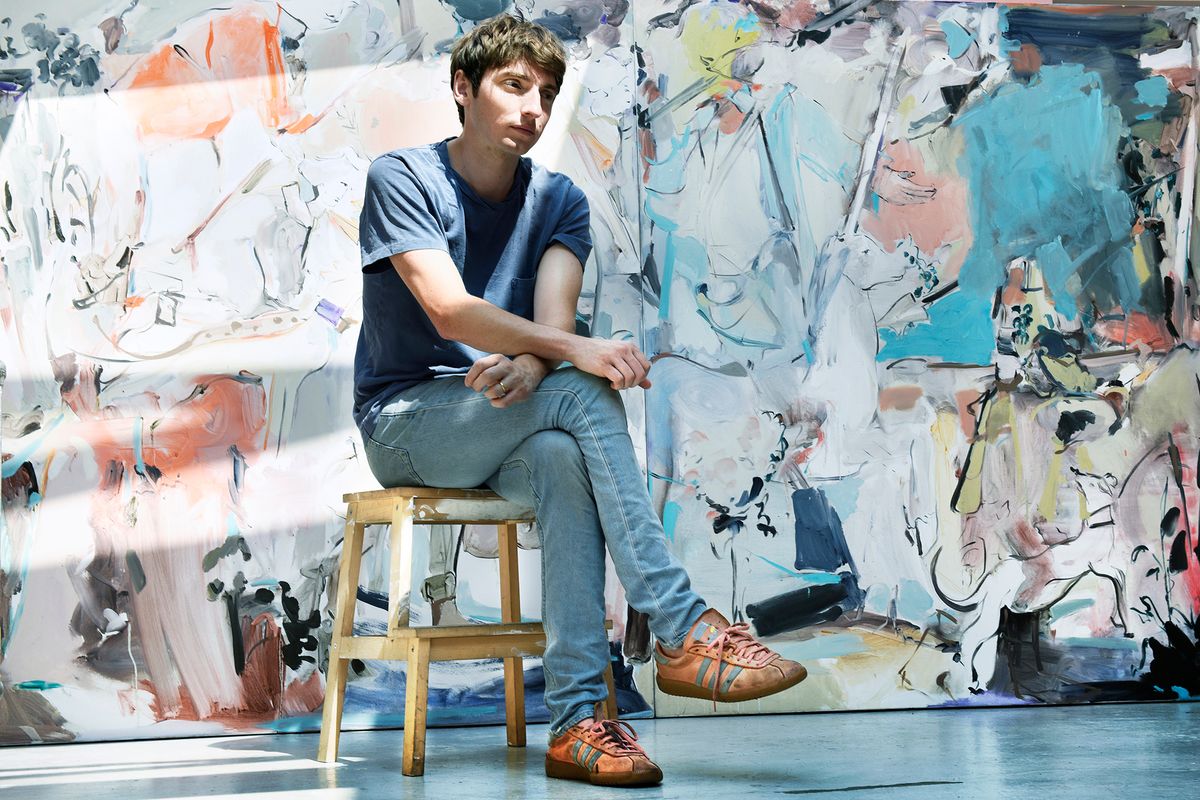 "The thing with painting is that it's really slow. The more you look, the more you get, and I like making people really have to look." Tomo Campbell is standing in front of one of his large-scale oil paintings, The Hunt, almost blending into the figurative characters hidden within the layers of fluid, expressive paint. Look closer and men on horseback ride gallantly through clouds of coral and dusty violet, while a unicorn thrusts its spiraling horn through a bold blue mist.

Campbell's vivid compositions draw inspiration from Victorian etchings, Athenian vases and medieval tapestries, which he upscales into evocative abstract paintings. "I like tearing things apart and pulling out colors and shapes, and I never know what people will pick up on. It's like looking at clouds — you find your own interpretation."

Born in the London suburb of Twickenham to a family of footballers, the 30-year-old Campbell has "no idea" where his artistic flair came from. His childhood penchant for drawing led to a place at Central Saint Martins, after his teacher encouraged him to apply. "I always wanted to study painting, but the type of painter I thought I was got torn out of me pretty quickly at CSM."

Campbell got his big break when Mario Testino bought a painting from his degree show in 2010, propelling him into London's creative spotlight. Alexa Chung and Harry Styles are also collectors, the latter of whom he met through his wife Sam, co-founder of Bleach London, the cult salon credited with pioneering the pastel-hued hair craze. The couple lives in Stoke Newington in East London with their two children, two-year-old Sid and newly born Honor. "I wouldn't say fatherhood has affected my work," he muses. "Maybe on a subconscious level, but being in the studio is a really private thing." It has, however, focused Campbell, forgoing "lie-ins and beers" in favor of early mornings and disciplined studio shifts.

Tomo Campbell photographed in front of one of his paintings at London's Cob Gallery.

Campbell was one of the last to study at the Central Saint Martins Soho campus before it upped sticks to King's Cross in 2011, and he remembers it being "really run down, in an amazing way. Nothing worked and it was shabby, but you felt that you were in the presence of great artists."

His degree show paintings of dancers led to a residency at the English National Ballet, and he has exhibited globally in Melbourne, LA and Dallas. Last year, he curated an exhibition of painters he found on Instagram, shown at the Golborne Gallery in London. "Social media is a strange one," he says. "It is amazing to have access to art across the world and look behind the scenes of how different creatives work. However, it can sometimes discourage people from actually going out and seeing art.

"I would love to have been amongst Francis Bacon and Lucian Freud in London during the fifties, drinking in the day and painting through the night. Crowds would just gravitate towards certain places. Now you don't have that so much, as you can be anywhere at any time."

Campbell is currently "hiding away," creating a fresh body of work ahead of a show in LA next spring. "I don't really have any long-term plan. I can only produce the work, and it's up to galleries and buyers to determine what happens next. If you wait for inspiration, it can make you lazy. You aim to surprise yourself."