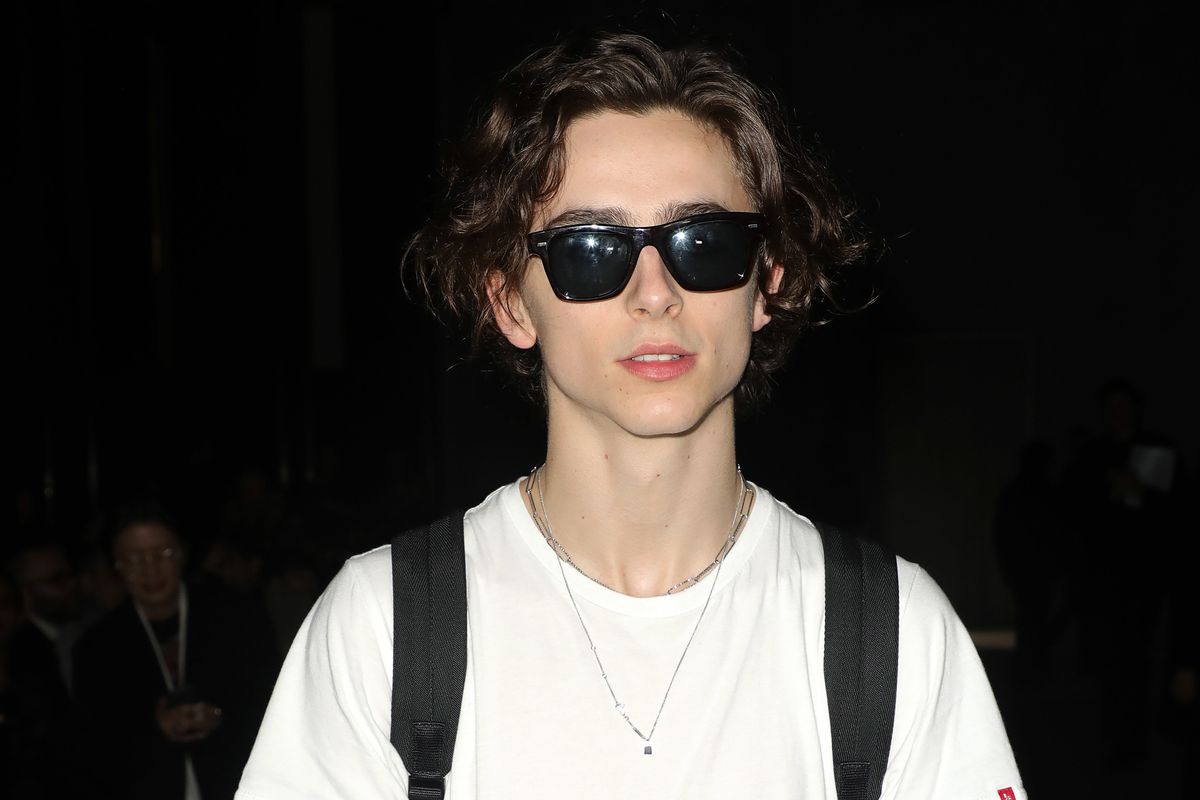 Did We Overhype Timotheé Chalamet as a Style Icon?

Unsurprisingly, it was the embroidered bib featuring black iridescent and purple beads with seven different shades of sequins that first caught my attention back in January 2019. But I first fell in "can't eat, can't sleep, reach for the stars over the fence, world series kind of love" with Timotheé Chalamet vis-a-vis a double-belted monochromatic ivory silk and satin tuxedo courtesy of designer Haider Ackermann. It was at the 76th Venice Film Festival last September that the neck pains (from the constant head-turning I'd soon be doing to gaze upon my Timmy) began.

He'd have me oo-ing again in custom Virgil Abloh and S.R. STUDIO. LA. CA., and ah-ing in silk Magda Butrym and Stella McCartney. I loved not just the turning of looks (the easy part), but the way he was delegitimizing the bare minimum from men on the red carpet. Everything seemed to come with a twist: bejeweled, splattered in paint, floral pants, cinched waists. He became a "one to watch" on the red carpet, reliable in his ability to give us something to talk about.

W Magazine published articles attempting to decode "How Timothée Chalamet Became Hollywood's Best Dressed Man on the Red Carpet." It was simple, really: he cared, yes, but he had friends in high places. "[Being involved] with fashion has been really fun, just as a fan," Chalamet told another style savant, Frank Ocean, during a chat the two had for V-Man in 2018. "I don't want to work with a stylist or anything. I've been following designers like Raf, Haider Ackermann, Hedi Slimane—these guys are like rock stars. They're artists."

But he wasn't just following them. He was befriending them. GQ noted a "budding red-carpet bromance between Chalamet and [Virgil] Abloh," while Ackermann called Timmy his "little bro." It became an exercise in proximity and accessibility, with Chalamet surrounding himself with a faction of fashion elite who were more than content to be associated with someone largely perceived to be at the apex of cool.

And fashion media ate it up. In November 2019, Vogue called Timmy "the most influential man in fashion." Not, of course, the designers whose duds he was pulling from. When he wore a Gorillaz T-shirt paired with Isabel Marant striped pants tucked into combat boots, the same magazine cheekily called it "Hot Topic couture," while Nylon dubbed it "a sartorial delight." And look, I was equally enthralled, calling him the "king of the red carpet" just two months before that, a rather basic-level nod to his film The King. I became easily enthralled and discovered a rabid fandom around Timotheé that seemed excitable and non-toxic. I dove in with great enthusiasm, making my stanship loud and proud.

The first sign of stanning on rocky ground came in at the Oscars, when I called his navy Prada jacket and trousers unimpressive. "In retrospect, we are to blame. Us (or am I projecting, and it's mostly just me?), who gassed this young man up in a way that his only next option was to fall," I wrote in February.

But I think my decision to unstan Timotheé, the king of the red carpet, happened when praise moved from the red carpet to his street style. "Timothée Chalamet's Endearing Street Style Makes Us Love Him Even More," wrote PopSugar earlier this year. But what was really endearing about it? He was simply wearing pieces from his friends. Take this look from last December, that consisted of a Prada nylon puffer, Louis Vuitton rings and Stella McCartney high-tops. Vogue's most influential man in fashion just wears designer duds.

Compare that to Jaden Smith, who once paired a Buffy the Vampire Slayer T-shirt with a leather skirt for a mid-afternoon stroll. The flavor! Or Shia LaBeouf, who has an entire Instagram account dedicated to his everyman-adjacent style and his ability to make a Bud Light T-shirt or bright pink spandex somehow seem editorial. The list goes on: Jonah Hill, Frank Ocean, Ashton Sanders, LeBron James, Lakeith Stanfield. These are all examples of celebs with a personal style that feels, well… personal. Sure, Timmy can run the whole "I don't have a stylist" line to push the idea that he's the puppet and puppeteer, but that ignores the idea that the style that's being praised really lacks point of view.

I think my rose colored spectacles were expelliarmus'd most recently with some paparazzi shots of what appears to be a Dries Van Noten shirt, buttoned only at the top half, worn over a pair of beige knee-length shorts. This, I thought. This is the man whose taste level I exalt?

I love Timmy, despite no longer claiming him to be mine (something he was never to begin with). I realize the clownery was never on him, but more people like me who gave platitudes to a rich guy with rich guy connections. I'll always love that Haider Ackermann Venice Film Festival moment, and how he sold the look with his posture on the carpet with a mature confidence and buoyancy in step. But at heart I'm just a fan in stan clothing. And that's fine.

Jump cut to me next year losing my proverbial wig when he steps out at his next red carpet. What can I say? I'm a walking contradiction.