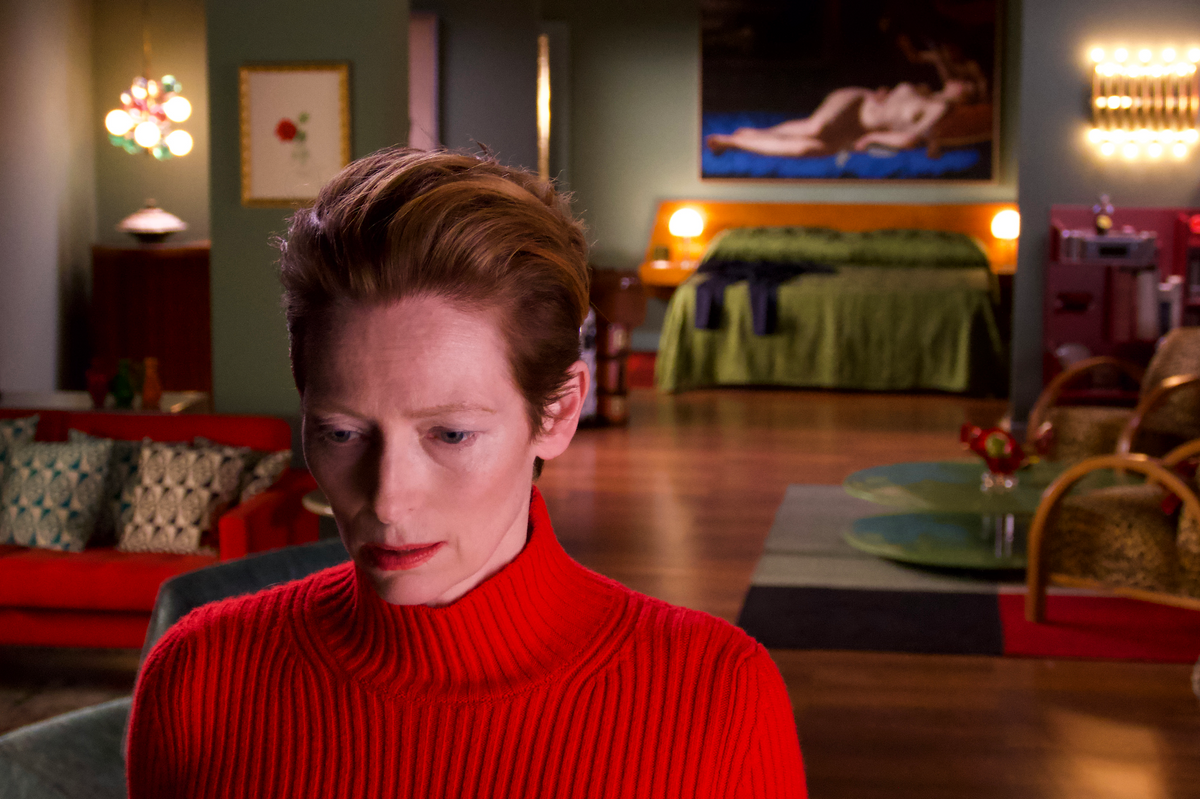 Tilda Swinton Is All Dressed Up and Nowhere to Go

Few film directors have elevated the symbiotic relationship between film and costume like Pedro Almodóvar has. The critically acclaimed Spanish director is known for his camp references and eccentric sensibility, but it's his celebration of the power of costume that makes his films a must for any fashion buff.

Indeed, who could forget the looks that Jean Paul Gaultier designed for Almodóvar's Kika and The Skin I Live In, the Chanel Haute Couture Spring 1992 dress that Penélope Cruz wore in Broken Embraces or the Dior and Prada moments in Julietta?.

Costume also plays an important role in The Human Voice, Almodóvar's latest project starring Tilda Swinton that's freely based on Jean Cocteau's play of the same name (it's also his English-language debut). In the 30-minute film, Swinton plays a woman going through all sorts of moods as she experiences time pass in the confinement of her apartment — sounds familiar, doesn't it? — while processing the abandonment of her lover.

Sonia Grande, the costume designer behind Almodóvar's previous two films, also collaborated with him on The Human Voice. "Pedro is, of all the directors I have worked with, perhaps the one who has the most knowledge of the fashion world," she tells PAPER. "He understands it and therefore uses it better in his films."

One of the director's most recognizable signatures is a deep shade of red that is prominent in his work, so it comes to no surprise that the opening scene of the film finds Swinton in a scarlet Balenciaga Spring 2020 bouncy crinoline dress. But this was not the only instance in which the color made it to Swinton's wardrobe.

"There is so often, usually if not always, room for a scarlet polo neck in Pedro's world," Swinton writes over email. "I was supremely proud to fly that particular flag this time around." This one flag manifested itself as the Balenciaga scarlet ribbed-knit separates from the Fall 2019 collection.

"...an urban sophisticate caught in the claustrophobia of a doll's house set, literally all dressed up with nowhere to go."

In fact, almost every outfit worn by Swinton in the film was a Balenciaga by Demna Gvasalia look. The film opens to Swinton in the crinoline gown, then sees her in a black dress paired with the infamous Finger Toe Boots, and post-opening credits has her reappear in a Resort 2020 turquoise suit paired with Tom Ford sunglasses and a black Chanel tote before she changes into the last Balenciaga knit set.

There is purpose behind these monochromatic looks, as they build the nature of Swinton's character — a character the actress describes as "a woman specifically fashion-minded, an urban sophisticate caught in the claustrophobia of a doll's house set," a woman who, she adds, is "literally all dressed up with nowhere to go" (something most of us can relate to these days).

One of the more evident ways in which costume embodies a character in this film is in the way in which it provides a tangible representation of the departed lover. We first see him in the shape of the bags he has left and is due to pick up: a tan Loewe duffle, silver Tumi suitcase and a large trunk, all artifacts that offer an idea of who this man is. We then see him take up the shape of a black suit laid on the bed, a sort of a ghost of the person that was. A suit the woman first observes and then proceeds to furiously hack with a small axe.

For the second portion of Swinton's character, in which she delivers her monologue while in conversation with her character's ex lover, she wears a printed velvet robe made by Grande's tailor, Angelo Malvuccio. Grande says that Almodóvar does not tend to go for custom pieces for his films, as he would much rather use looks he has previously visualized, but the robe that lived in their imaginations seemed impossible to find, so it was custom-made in the end.

Finally, we see her transition into a stunning Fall 2020 Dries Van Noten look, which she wears while pouring gasoline all over her apartment before lighting it on fire. This moment is crucial in Almodóvar's revision of the original play, as the Dries look embodies a radical mindset and behavioral change in the character. It represents a regeneration of self and portrays a more empowered woman, one that is "definitely more punk" in Grande's words.

In fact, it is the contrast between the contrived monochrome looks from the beginning juxtaposed against this last look — consisting of a sequined skirt, plaid button down, floral shirt, and leather jacket — that alone communicates the rebirth of the character and gives Almodóvar's version of the material a sort of twisted happy ending. While she is walking away in a full Dries look as firefighters enter the set, there is really nothing to say other than good for her.

Swinton has worn her share of iconic looks both in and out of the screen. When asked about her experience with costume, she refers back to Luca Guadagnino's I Am Love and A Bigger Splash, both films in which she wore looks by Raf Simons, who worked with the costume designers to create pieces for her characters. "In both cases, this liaison was mutually fruitful" she says. "It lent a highly evolved fashion artist to create delicately expressive and integrated personal wardrobes for the portrait of one specific woman per film."

As for The Human Voice, Swinton says that they "sailed close to this distinction" as Grande provided pieces from recent collections for them to choose from. "It was a very easy business deciding the colors and silhouettes that spun the right contemporary tale while also living in that somewhat heightened realm necessary for a film by Almodóvar," she says.

The Human Voice, which comes out in the US on March 12, is Almodóvar and Swinton at their most pure and distilled essence. It is a 30-minute feast for any fan of either the director or the actor, and for any lover of really good fashion. The language this time around might have been English, but the dialect is nothing but pure Almodóvar.

Photos courtesy of Sony Pictures and via Getty