Last spring for Red Bull Music Festival New York, she transformed Manhattan's iconic Rainbow Room space into Whack World. Her second RBMF set, Whack Factory, took place late November in Chicago. Both shows are an example of how Red Bull empowers artists to realize their dream scenarios for festival performances, so that their visions match what fans end up seeing.

In Chicago, Whack created something of a deranged freak-show carnival, complete with a windmills made of doll parts and mutant skeletons. She wore a white, voluminous, oversized lab coat made of mannequin men that glowed in the dark. Designed by Stina Randestad, they are meant to resemble crowds of men praising Whack, but hung upside down, so they are forced to look up at their queen.

PAPER caught Randestad after the subversive set to talk design inspirations, the process of working with Whack, and how fans respond to her work. Below, see an exclusive video showing how it all came together. 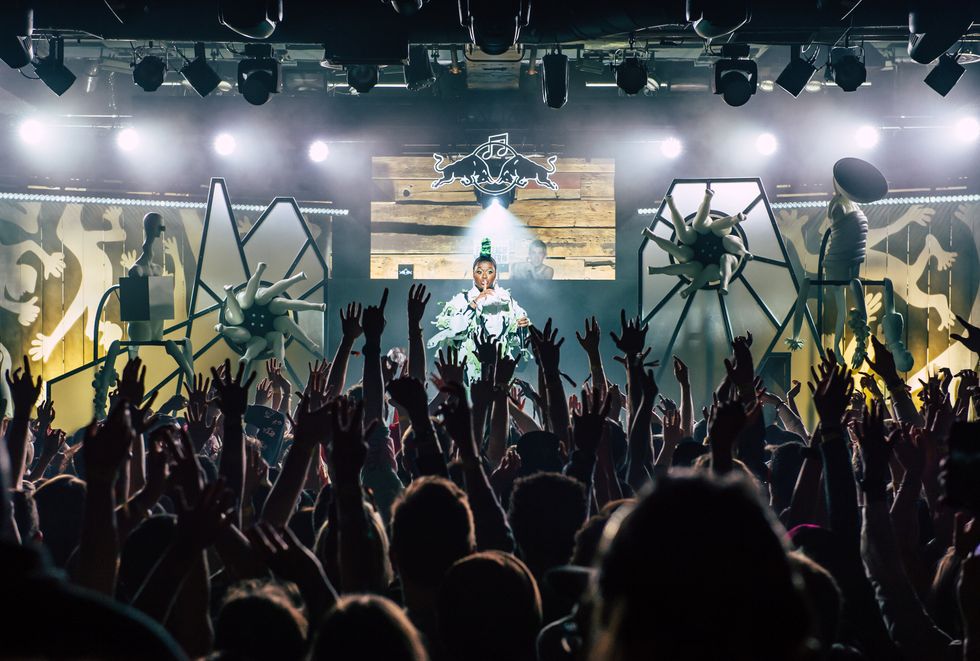 Your custom Red Bull Music Festival Chicago look is the latest of many statement-making fashion collaborations with Tierra. What was behind this one?

I got a brief from the stage designer around the stage design and concept, which they had already started working with. The concept was "Whack Factory," and I could see rendered images of a stage with sculptures of mannequin arms and legs. The backdrop pattern had references to Picasso paintings with twisted looking bodies. So I thought, Who's Tierra in all this? I figured she was the manager of this slightly dystopic factory. I decided that the garment should have references to a factory environment — a uniform. The white coat with a classic collar and buttons seemed like a good canvas and easily recognizable for everyone.

But Tierra is a Whack manager, so it needed something extra. I thought I could incorporate the twisted bodily aspect from the brief into the coat. I'm very into fabric manipulation and I make materials that move and have hidden effects, so cutting up the fabric and incorporating glow in the dark came to mind. I sketched up some options and Tierra liked the one where bodies looked like they were falling. So I made a design of a cutout shape of a man in praise, looking up at Tierra to create an inverted image of a man falling head down. The falling men would also flap when she moves, which I thought could look fun on stage. Color-wise, I kept the lab coat white, to not lose the reference, and work with black and neon green as accents. I also was tasked to design the pattern for the backdrop with the same men falling over. And I made a black catsuit with a glow in the dark man printed on top of hers to wear underneath.

Related | Tierra Whack's Afropunk Look Was Made From Plastic Waste

How long did it take to make this garment from its initial conception?

I always think before I start a project, This time I will count the hours! But it never happens. I think it's good otherwise I would go insane. Prepping the fabric and glueing together sandwiches of green lycra, black scuba and white glow-in-the-dark vinyl, before laser-cutting it took a really long time. Since I'm constantly making things I have never done before I'm never quite sure what problems will occur along the way. That makes time very hard to plan. But I always find a way to solve the problem. Research, sketching, material hunting, doing little mock-ups, making vector files for laser cutting, prepping fabric, pattern cutting and sewing probably ends up around 80 hours — or 100. I couldn't tell, and it really doesn't matter. You get the job done and make your vision come true no matter the hours.

"A stage outfit for Tierra cannot only be just visually memorable... she also has to feel comfortable and powerful."

Tierra's major performance looks are often suited for a venue's particular set-up and seem designed to be as visible and visually memorable as possible. What are the challenges of customizing looks with these things in mind?

It didn't feel challenging or difficult. The artistic freedom this project gave me and being matched with Tierra, who's expression I can very much relate to, one can just sort of relax and design what feels natural. Designing something that feels out of your comfort zone is way harder. I usually get a little tingle in my belly when I know I'm on the right track when I'm designing. And my head goes, This is a bit crazy but really fun, and then I giggle a bit at what I've just done. That means it's a good idea.

But, of course, a stage outfit for Tierra cannot only be just visually memorable for the audience; she also has to feel comfortable and powerful in her outfit. She needs to be able to perform and the garment shouldn't compromise that. So that combination is something to keep in mind for sure. 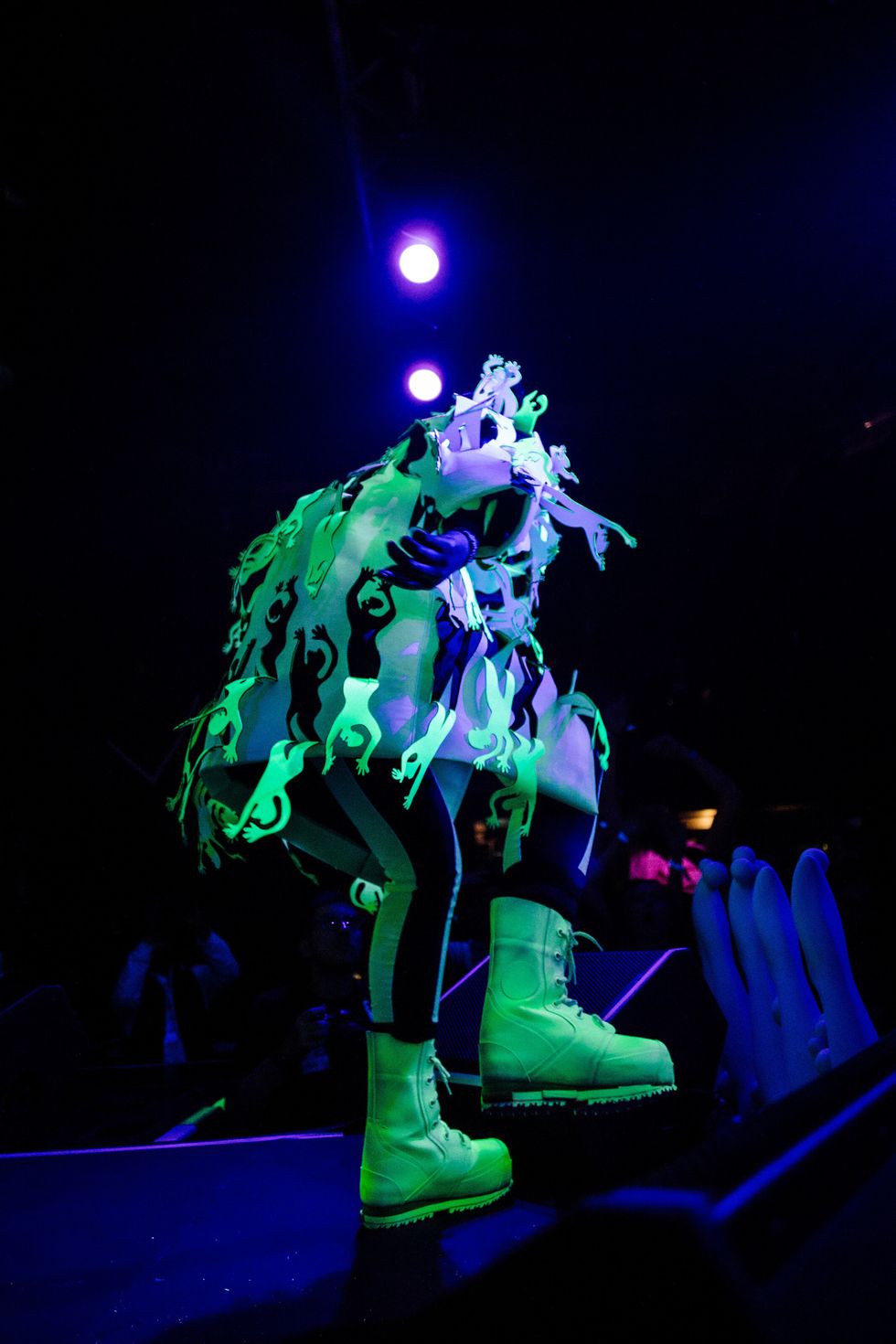 As an artist, Tierra brings so much to the table in terms of original creative ideas. How do you go about interpreting her ideas and bringing them to life through design?

I see Tierra's world as very colorful, cartoony, fun and a bit nostalgic, but always with a twisted, dark side to it. I think that mix of opposing elements is very strong and something I'm also drawn to. So all of that I have to keep in mind when creating for her. For future, I really like working as we did during Whack Factory. We were a team following Tierra's vision and other people's ideas gave me ideas. The framework was clear: my design should fit into Tierra's world and within a set concept that I had the possibility to enhance through clothes. It felt very reassuring to have her brilliant stylist Shirley Kurata to bounce ideas off; she's been very supportive.

What's it like to see your garments onstage? Do you ever get approached by Tierra's fans for custom work?

It's so great! And it was such a relief to see that it worked out well. And I'm so proud the garments were worn by Tierra because she is a true entertainer. I watched — and stalked — so many people posting on Instagram from the show and I sat the whole evening giggling in the sofa because it looked wild. The audience sang along and seemed so happy. I'm often a bit disappointed after going to concerts because I often feel the artists are struggling to connect with the audience, but when I saw Tierra I was so proud because she was absolutely giving it all. I haven't been approached yet by any fans, but I know Rihanna is one of them, so why not!

Tierra Whack Responds to Criticism of Her Beyoncé Collaboration