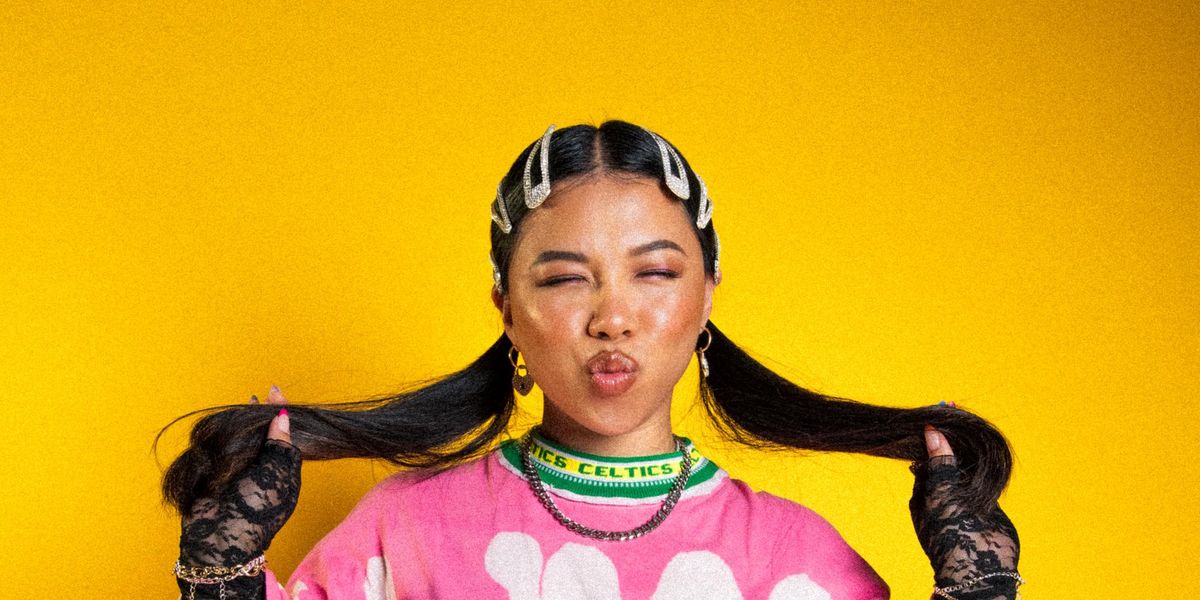 Thuy Is in Her Bag

Growing up in a Vietnamese refugee family, Oakland native Thuy (pronounced "twee") struggled to find balance between her dreams and her parents' expectations. Like many '90s kids, she idolized the decade's pop stars — namely Britney Spears and Christina Aguilera — as well as R&B vocalists like Brandy. And though she never saw a face that looked like hers on screen, she held on tightly to her innate musical talent in hopes of one day making it as a singer. "I come from a traditional family with a traditional mindset, culture and values," she recalls. "It was really hard for them to get to America, and they ingrained that in me, my brothers and my sisters from a very young age."

In an effort to please her immigrant parents, Thuy, born Thuy Tran, obtained a Bachelor's degree at UC Santa Barbara. But after graduating and finding a job at an optometry clinic, she still knew something was missing in a big way. "I didn't feel like I had a reason, or a purpose in life," she laments. "But I met someone: my boyfriend Charles [Charron]. He would always be in the studio and one time I just asked him, 'Can I tag along?'. The first time I got there, I instantly had this weird, gravitational pull to it."

One week after that fateful visit in 2015, a friend told Thuy he had a spare bedroom in Los Angeles. The timing was perfect. "I decided I needed to take this leap of faith, because you only live once,'" she remembers thinking. "I don't care how scary it is." Shortly after, Thuy quit her job and moved to LA to pursue music full time. "It's honestly been the best decision I've ever made. And I think I needed to be at that really low point to realize I needed to experience all of these highs."

Since then, the 29-year-old songstress has carved out a space for herself both within and beyond the community of self-made Asian-American musical artists that have emerged in the streaming era. Her signature, nostalgic sound — catchy R&B melodies, agile runs and dreamlike soundscapes — has earned her millions of streams across Spotify, Soundcloud and Apple Music. One of her biggest breaks came in 2018 with the track "All Night Long," a sultry, 2000s-inspired love jam in which she sings, "Baby when I hit you up just answer / keep it on the low, you ain't gotta tell your friends yet." A slowed-down version of the song has since gone viral on TikTok.

Thuy recently debuted "in my bag," the catchy third single off of her forthcoming debut EP. A star in the making, Thuy still keeps it real when she talks about her journey thus far, saying she hopes she can put on for her community. "I never had a mentor, or anyone to show me the ropes in the music industry, which is why I think it's important for me to mentor other Asian-American teens and young adults," she says.

Below, PAPER caught up with Thuy to talk about her upcoming projects, her process and how she got her parents to finally recognize her music career.

All things pandemic aside, it seems like your career has been popping off recently.

Yeah, I initially thought that the pandemic would put a halt to all of my shows, but I've been booked for so many. I performed for ASU's Vietnamese Students Association yesterday. And even though it was virtual, we were still able to talk and I could still feel their energy. Being able to interact with my fans virtually was incredible. And I actually found my management during the pandemic. But it is weird, with everything happening in the world, with all the tragic occurrences.

Did you write any music to kind of cope with or address everything this past year?

"111" is a song I hold very dear to my heart. When quarantine hit, I was in such an anxious state and I would wake up and just not feel like myself: "Sometimes I feel like I can't move, wake to a stranger in my shoes." I genuinely like to write about situations I've personally experienced myself. Not only is it therapeutic but it's true to me. The best part is that my own experiences have inspired and helped so many others.

What's your process in the studio?

When I'm in there, I'm in the zone. I'm not gonna have a bunch of people there — just my boyfriend, who co-writes with me, and my engineer. Writing the words is the hard part, but the melodies are fun. I just sing a bunch of gibberish and choose the melodies I like. Then we'll start writing the lines. It lets me have fun with it.

Related | GusGus Finds a 'Mobile Home' in Our Technological World

What else do you have in the pipeline for 2021?

I'm releasing my full debut EP in the summer and we're doing a kind of waterfall release where we dropped those first few songs as singles. I wanted every song to get its shine. Expect more content, more music and hopefully a tour down the line. My goal is to travel and perform. It would be incredible if my music was able to take me around the world.

Have you been to Vietnam?

I have! But the last time I went was right before high school. I know it's changed a lot.

There's a huge movement in music happening there now.

Yeah it's super dope. I feel like a lot of the artists are channeling an American hip-hop sound. I just heard about Suboi on this podcast called Lion's Share, which spotlights Asian and Asian-American artists.

She's the queen [of Vietnamese rap].

She's blowing up. She's fire. It would be dope to kind of bridge the gap one day between Vietnamese-American and Vietnamese artists.

Your music clearly has a little bit of West Coast influence and an R&B vibe. But there's not really any such thing as an Asian-American "sound," is there? Because it's not an international genre, like K-Pop. It's still in English. It's still American. How do you represent being Asian-American, while also trying to define yourself beyond that label?

That's such a hard question, but you're right. I don't want to be boxed into any one category or genre. If you look back, R&B music was created by Black musicians. Then I have the pop influence from Britney Spears from growing up. People tend to want to put Asian culture and people in a box. I want to make music that heals my soul and makes me feel good.

Like you said, you're making music that's authentic to you.

Yeah, and in doing so, it's great that I can bring more visibility to Asian-Americans in music and entertainment. It inspires me when people reach out to me and say, "Wow I didn't know there were Asian artists making R&B music."

Plus, your name is undeniably Vietnamese.

So are people surprised when they hear your music and then see you? Do they not expect that?

I actually get that a lot. I don't know if it's a compliment or not, but I think it's awesome that people can listen to music and take it for what it is. At the same time I think it's about breaking down those barriers and showing people that there are other sides to quote-unquote Asian music. And it's not just me. A lot of others are doing what I'm doing.

Anyone you'd mention in particular?

Keshi. Keshi is incredible and with all the recognition he's getting, he's paving the way.

One of my favorite songs from your discography is "Vapor Rub." It's such a bop and it also has that dope dance video.

The group, IMI Dance, is from Sydney, Australia. They killed it, and it's so cool to build community with other Asians and spread the music further.

So people all over the world know your music. How do your parents feel about your career now? Do they accept it, and if so, when did that happen?

They're so supportive of it now. And I think they'd always been supportive of it, but just didn't know how to wrap their heads around the possibility. I remember one time my dad visited me when I first moved to LA. You could just feel the conversation coming. He asked me, "Are you going to go back to school?". I remember feeling so defeated. You know, I wanted to make my parents proud.

But I had this drive where if they told me I couldn't, I was going to prove them wrong. This past year, I would show them my music on YouTube and show them all the plays I'd get. And then just being able to get paid for virtual shows. I would say they're proud now. At the end of the day, your parents just want to know how you're going to be okay. That you'll be able to make a living for yourself and set yourself up for the future.