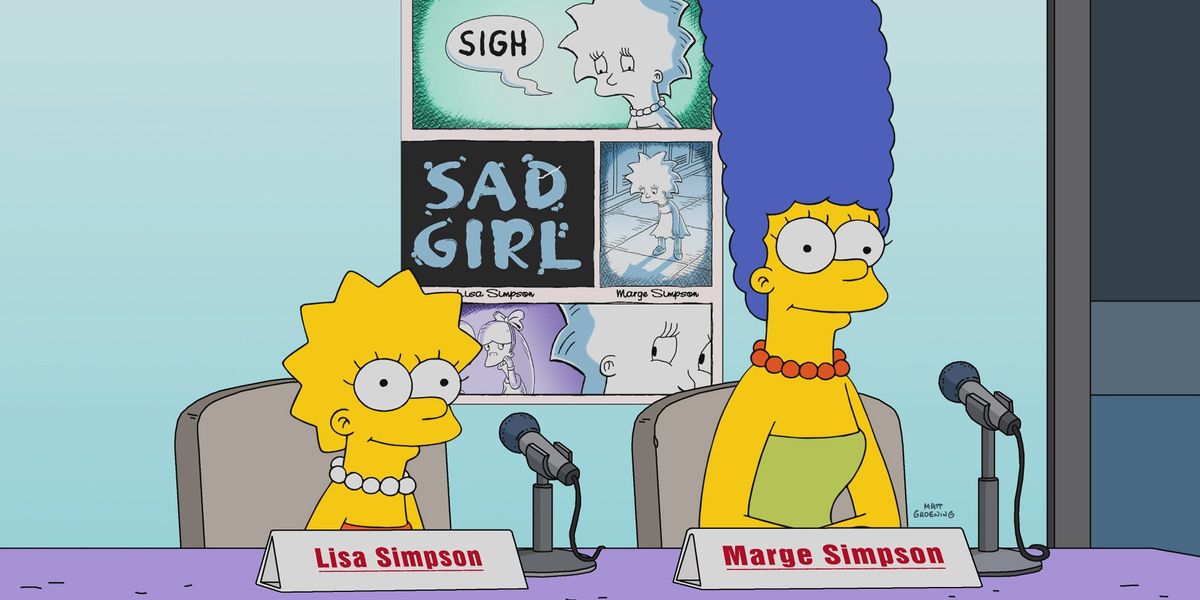 Hari Kondabolu's 2017 documentary The Problem with Apu thoughtfully explicated the Simpsons' racist portrayal of the Indian character Apu Nahasapeemapetilon. Apu was voiced by Hank Azari, a white man who used a made-up accent to string together a bunch of racial stereotypes about South Asians. This portrayal was one of the few representations of South Asians on TV at the time and, as any Desi whose parents' accent was mocked by their white friends can tell you, the repercussions for brown people were widespread.

Now, the show has responded to Kondabolu's film. A crass exchange in a recent episode of The Simpsons called No Good Read Goes Unpunished shows Marge Simpson editing the children's book The Princess in the Garden to be less offensive. In response, Lisa Simpson is... offended by Marge's desire to be less offensive, as she thinks the story now lacks an "emotional journey." The whole conceit of the clip indicates a deep-seeded fear among its white Creators that racial justice will in some way limit them (see the title of the episode). "But what about the jokes we can no longer tell? Won't our children's stories be so boring if all the characters are treated with respect and care?"

Kondabolu expressed his disappointment with the show's response, saying, "In 'The Problem with Apu,' I used Apu & The Simpsons as an entry point into a larger conversation about the representation of marginalized groups & why this is important. The Simpsons response tonight is not a jab at me, but at what many of us consider progress."

In “The Problem with Apu,” I used Apu & The Simpsons as an entry point into a larger conversation about the represe… https://t.co/EkFE38ScY8
— Hari Kondabolu (@Hari Kondabolu)1523250840.0

In just 16 seconds, The Simpsons manages to pack in a frankly startling number of racial micro-aggressions. When Marge Simpson asks, "Well what am I supposed to do?," Lisa Simpson responds, "It's hard to say. Something that started decades ago and was applauded and inoffensive is now politically incorrect. What can you do?" Marge then says, "Some things will be dealt with as a later date," and Lisa packs the final punch, adding, "If at all," as both characters look straight at the camera.

An image of Apu's face shows his signature and the phrase, "Don't have a cow." (This is a multi-layered anti-Hindu jab, as many Hindus don't eat cows. It weaponizes a cultural difference that is already ridiculed by white America and transforms it into a way to tone police rightfully angry brown people). The choice to break the fourth wall in this clip is also frightening. Though it's a film technique that is often used when a show addresses issues that happen outside of the show's fictional world, here it feels menacing. It is a threat to those of us who have the audacity to demand equality that we should just shut up, because The Simpsons has heard our grievances and chooses to not care. This is the fear a lot of people of color know deeply — that white people know what we think and feel about the racial inequality we face, but don't ever plan on changing because it's just too much work for them.

Let's unpack the rest of this clip line by line:

"Well what am I supposed to do?" A rhetorical question. We all know she's not going to do anything, and that's the point.

"It's hard to say." I realize this is rhetorical but also... is it that hard to say, actually? Lisa Simpson, known advocate for marginalized groups, should know how to respond to her mother's question. Here are a few suggestions I came up with for the creators of The Simpsons off the top of my (angry, brown) head: Think about why you feel upset as a white person accused of racism. Reflect on whether that anger is valid or is a response to your decades of hurtful behavior finally being called what it is. Issue an apology for not realizing that your character was racist. Hire more brown and black writers to work on the show. Create multidimensional characters of color who are voiced by actors of color, not by white people.

"And was applauded and inoffensive" Who exactly applauded this? Who told you this was inoffensive? Was it South Asians? Or was it the group of white people who created the stereotype? If it was the latter, that doesn't mean it was ever inoffensive, it just means you didn't know it was offensive. (Even if it was the former, a select group of people of color can't speak for all of us, so don't try the "But my brown friend said it was ok" line. And also, people of color don't always feel comfortable sharing their true feelings on racial aggressions when white people have power over them). The oppressor doesn't get to determine what is or isn't offensive to the oppressed.

Is now politically incorrect. White people do this shit all. the. time. They distance themselves from racism by dismissing it as "political correctness," as if the hurt, anger, and ridicule people of color face is actually just a new social movement they invented. The criticisms against the character of Apu aren't about a contemporary shift in jargon, they're an analysis of the HISTORY of colonialism, racism, and white dominance in media. If they feel new to you it's because you weren't paying attention earlier and tools like the Internet allow people of color to spread feelings they've always had further and at a faster rate.

What can you do? The rhetorical non-question asked again. See above.

Some things will be dealt with as a later date. This is the one of the most privileged statements ever. The suggestion that this issue can be set aside and dealt with later indicates that it doesn't immediately affect whoever wrote that line. Some of us don't have the luxury of dealing with racism later because it affects us now.

If at all. This threat aligned with both characters looking at the camera. They're don't care about Kondabolu's carefully-articulated arguments. They're not dealing with this.