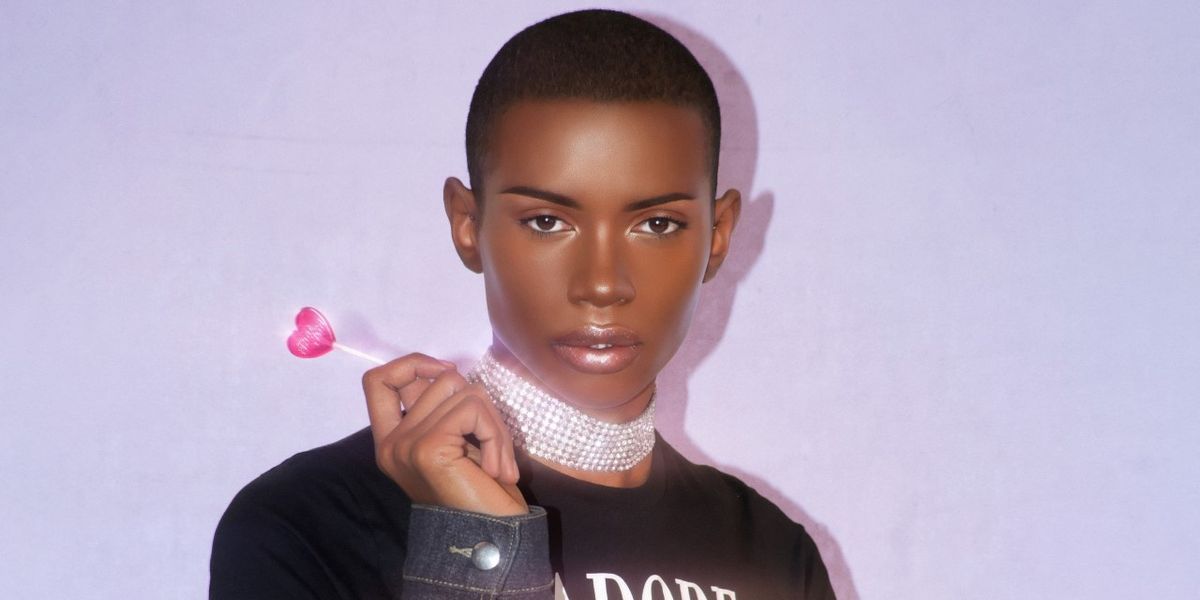 Why That Kid Really Is 'That Kid'

"Heterosexuality has officially ended," reads the top comment on the YouTube stream of That Kid's "Dial Tone." The 2018 track would go on to shape the tail-end of 2010s pop music, bringing it back to its flashy roots. The hook is infectious, sure ("Call me when you're all alone/ Touch me through the dial tone"), but what's more compelling is how the track doesn't rely solely on Y2K sonics to make it interesting. Every synth blip, dial-up and ring is only accented by a heavy bass that would've been too blown out for pop radio in the Paris and Lindsay era. In one song, That Kid managed to set the tone for an entire era of Gen Z bubblegum-pop-gone-awry.

That Kid's debut mixtape CRUSH is only a departure in the sense that it shares the complete story, versus the sporadic singles fans have gotten used to over the past couple of years. Some songs, like "Taco Bell," have even developed mythology of their own since That Kid dropped hints about the full-length project months leading up to its release. Have no fear: every song lives up to the hype.

Produced primarily by hyper-pop SoundCloud icons Ms. Cheeseburger and Donatachi, That Kid's vocals skate effortlessly on top of each drum loop, undisturbed by the full-frequency dance instrumentals. It's not a downtempo project, that's for sure; the first track is literally titled "Go Fast."

The closest That Kid gets to creating a slow jam is still marvelously high-strung. "Spectacular" is a drug-fueled proposition to "risk it all," bubbling with eccentric pops and whirrs on the chorus. The track is perhaps the most intimate moment fans of That Kid will have with him throughout the entire project. Each verse is still slathered in auto-tune, with pitched-up backing vocals, but something's different. Whether it's the hook-up subject matter or the digi-ballad chorus, it's like That Kid — in all his glittering glory — is singing right to you.

Read That Kid's full interview with PAPER below and find out if he has a CRUSH on you, too.

This mixtape seems like it's been in the works for a long time. When did you first start working on it?

I'd say I started working on it seriously back in August. A few songs such as a "Spells On U" and "Captain" were started a couple months prior. We actually wrapped the entire thing up on the last day of February. It did take a while to finish though, I wrote around 20 brand new songs for the mixtape and I just wanted it to sound the best it possibly could and learned a lot while making it.

How has your sound changed over time — say, starting at "Dial Tone" and up until now?

I'm a lot more confident now compared to when I made "Dial Tone." I was 19 when I made that song and was very unsure of my own ability. I wanted everyone to like me and what I was doing. Now at 21, I think I'm a lot more confident in my own skills. I'm not so worried about if people like what I'm doing, I'm doing it more for me and that's allowed me to experiment more with my writing and singing. Even when it comes to production we brought in new elements like the idea of playing with garage music and even using water sounds as like synths. I think overall my sound is just a bit more fully realized now. I went into this with the mindset of making the pop project of my dreams and this new found confidence allowed me to do just that.

You have stellar collaborations on this mixtape, how did you go about recruiting LIZ, Tama Gucci and Ravenna Golden for CRUSH?

Well, I've been a fan of all of them for a while and had been waiting for the right moment to work with each of them! Specifically, I've been a fan of LIZ since I was 15. I sent her the demo of "Spells On U" through Twitter not really expecting anything and then when I met her for the first time last July she told me she loved the song and would love to do a verse on it. It was really full circle for me. Ravenna and Tama were two people I knew I had to have on the project. Ravenna has such a distinct vocal tone and just overall world sonically. Same goes for Tama Gucci. They're both such stars. I really like working with people who you can tell do their own thing and really have a clear cut vision of who they are as artists.

Is there a song on the mixtape that stands out as having been particularly tough to get just right?

Actually there was one song that drove me a bit bonkers! The opening track, "Go Fast" was actually quite a challenge for me. I wrote the hook and first verse in like 30 minutes but I rewrote the second verse like three or four times. It was driving me bananas. There's also a whistle note hidden within the second hook and I had to record that around 15 times to get a usable take. That song was definitely a struggle for me. It turned out really fun though!

Let's talk "Taco Bell," one of my personal favorites. What's the story behind that song?

I normally don't take songs that are already somewhat written because writing is truly my favorite thing to do. "Taco Bell" was a rare exception though! It was originally an unfinished song that a close friend had lying around and didn't plan on using. I really fell in love with it. I asked if I could use it for my project and went on to revamp it with my producer. I wrote completely new parts for it, changed some words, all that stuff just to really make it my own. It also felt like a good fit because ages ago this guy took me on a date to Taco Bell so I kind of had him in mind when I was writing the rest of the song. He followed me on Twitter the other day which kind of sends me!

I always get a Crunchwrap, Cinnamon Twists and a Baja Blast! It's literally my go to, I never get their sauces cause they just ruin it for me. Back in 2018, when I used to work at the mall they would give me free Taco Bell all the time so I'd be walking around the sales floor with a large Baja Blast or hiding in the fitting rooms with a crunchy taco.

Your Soulja Boy cover is also major. That song is one of my all time favorites and you really did it justice. Why that song? Did it have anything to do with "Dial Tone" being your first big hit?

"Kiss Me Thru The Phone" is such a romantic song to me honestly. It's just one of those songs that you can't help but sing along to. It's so catchy and it even sounds a bit emotional to me. I remember back in November, Ms. Cheeseburger and I were discussing the mixtape and I brought up the idea of doing a Jersey club rework of "Kiss Me The Thru The Phone" for it and she was super into the idea. Two days later, I had the beat for it and ran off to record it!

How would you define the community you're a part of on Twitter and in the new DIY pop music world that's been growing on the internet?

It's really just a bunch of young broke creatives doing their own thing independently without any backing from labels or sponsors trying to make a way for themselves in the industry. It's really cool 'cause the internet has kind of made it possible for anyone to grow a following and even if it's not mainstream music it's still garnering buzz from places like stan Twitter and people can really connect with it. I definitely don't know where I'd be if it weren't for the internet allowing me meet and work with other artists and creatives. It's nice to see so many other new artists who also do this all from their bedroom rise from it as well.

How'd you go about getting the production for this mixtape to sound so flawlessly modern, but also like it was made in an era of 2010s bubblegum pop?

I really have to give that up to Ms. Cheeseburger and Donatachi! They really understand my creative vision. My process with both of them has always been extremely collaborative, we bounce ideas back and forth when it comes to production and sounds we could try to fit into the whole That Kid world. Ms. Cheeseburger handled all the vocal production, mixing, and mastering on the project and she knows I'm a sucker for heavy auto tune and vocal chops so we kind of have our own little special creative groove together.

Do you want to film any visuals for the project?

I'd love to do a video for "7 Minutes In Heaven." I have this idea for a really fun party video for it. I have a couple directors I'm thinking of hitting up to help make that happen. I've also been harassing Taco Bell for months to sponsor me so I can do a video with a huge budget for that song. I'll even make a family friendly version if I have to!

Who inspired you to make a full-length project like this, or was it always your intent when putting out singles?

When I was doing the singles, I did consider doing a project with those songs on it. I sold a few of those songs from that project off to other artists and was pretty anti project for a while, it just wasn't the right time for me honestly. I also just felt like the format of a full length was kind of dead but then I started to warm up to the idea again over time. It felt like the next move for me to make in my musical journey. I spend a lot of time wondering what to do next, I'm already thinking about what kind of sounds I wanna explore on the singles after this and what kind of releases I want to do in 2021. I'm always thinking of what's next.