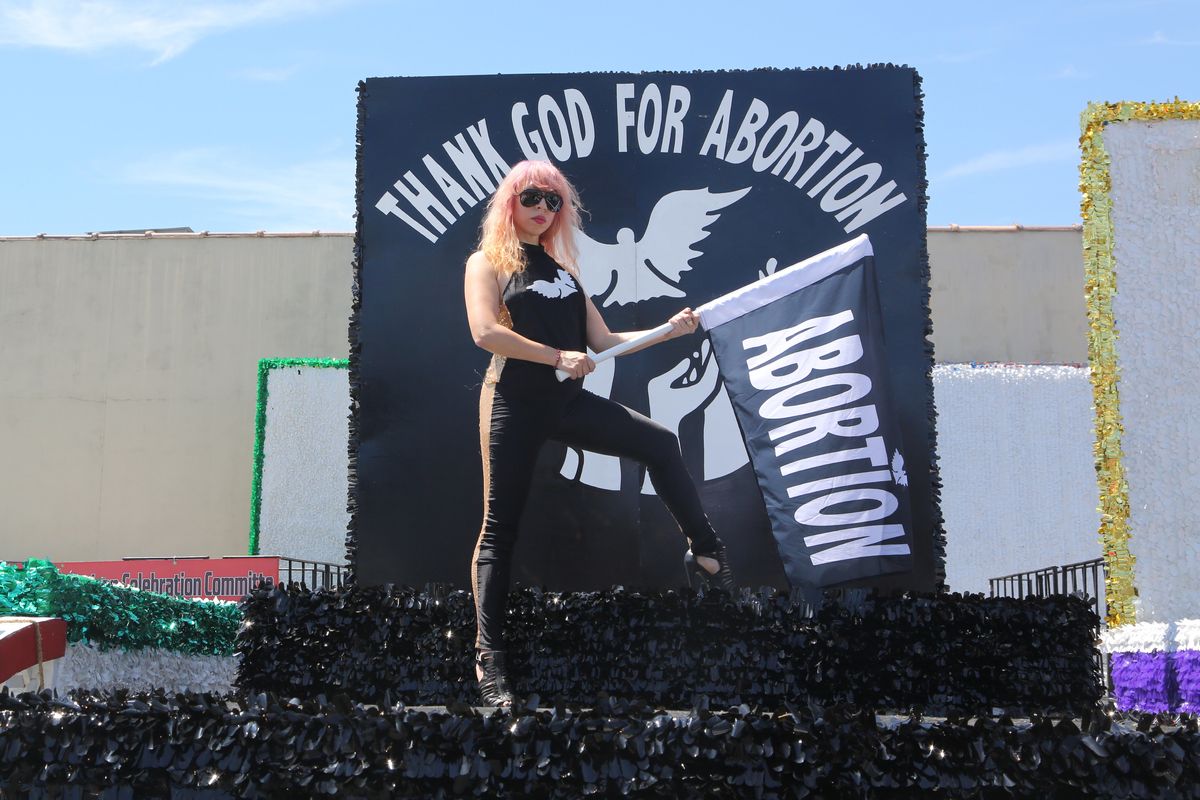 Pride is all about intersectionality, from the first moment a black transgender sex worker threw a brick at a cop to the massive parades taking over major cities across the world everyday filled with floats representing people of all identities. Artist Viva Ruiz, however, still noticed one area in which visibility was lacking at Pride events: reproductive rights. In response, Ruiz started "Thank God for Abortion" (TGFA), a multidisciplinary project that advocates for free, safe and legal abortion incorporating the very Christian imagery typically used against the cause.

The project began, Ruiz says, as "a literal expression of anger, and also as a declaration." Living in progressive, queer circles in New York City, Ruiz still found that heavy stigma remained around the topic of abortion. "The pushback you get from the left is different than the pushback you get from the right," she says. "On the extreme end of the right they like, kill abortion doctors. When the left pushes back it's, 'Of course it should be legal, but apologize and be on your knees to thank me for giving you this right.'"

TGFA then, with its provocative t-shirts and unabashed celebration of the most-shamed aspect of reproductive rights, is "a useful tool to expose these attitudes. The point is to unify us here among ourselves so we can be together to bring down the real enemy," Ruiz said.

As an activist raised in a Catholic Latinx household, Ruiz is equally well-versed in the arguments against abortion and the reasons why limiting it are so dangerous to women's health and empowerment. "I say this with more confidence than I have ever had, today in this extremely deeply fascist place we're in now, where people are doing unspeakable things in the name of white supremacy and patriarchy. The lengths, the extremes, the permission, the condoning of torture and racism — they are really unified. It's easy to unify under hate and white supremacy. I am so distressed and upset, and the project was an expression of that. It's a 'fuck you.'"

Ruiz demonstrates that old adage that the personal is political, noting that the project is grounded in her own lived experiences. "TGFA speaks about me and my two abortions," she said. "Mine were not traumatic in the way that I was taught they would be in Catholic school. I believe in God, and I can say that I'm blessed."

"The community needs us to have access to abortions. A community is strong when you are able to make decisions about the family you are raising."

The project has manifested in music (including Spanish versions of TGFA songs that she notes might be challenging for her family to accept, given that "we have been trained to be quiet about this.") She and fellow allies will also have their own TGFA float in New York City Pride this year, which was partially made possible by a donation from Shout Your Abortion. "They came in as allies; that's what we do. It is so dire right now, and who gets left out? Black women, women of color, trans people."

To anyone who might take issue with her float being part of Pride, Ruiz notes that reproductive rights are queer rights, adding "Trans people need abortions, queer people need abortions — the community needs us to have access to abortions. A community is strong when you are able to make decisions about the family you are raising."

Ruiz is emboldened by the recent policy changes in historically conservative places like Ireland and Argentina, spurred in large part by waves of public protest and action. As state legislatures continue to roll back abortion protections, with threats of reversing Roe v. Wade should the Supreme Court change, Ruiz wonders what it's going to take for America to follow the "green wave" of reproductive rights activism happening in other parts of the world.

"My hope and dream is to uncover where we are disconnected and heal it," she said. "That's what makes it worth it to open up and explain why it's a big deal. I don't spend that time with everyone — I'm fine to just agitate and keep walking. But it's not just me, there are people who are wearing [the shirts] or talking about it and connecting with people. Where you think we're different, we're not."