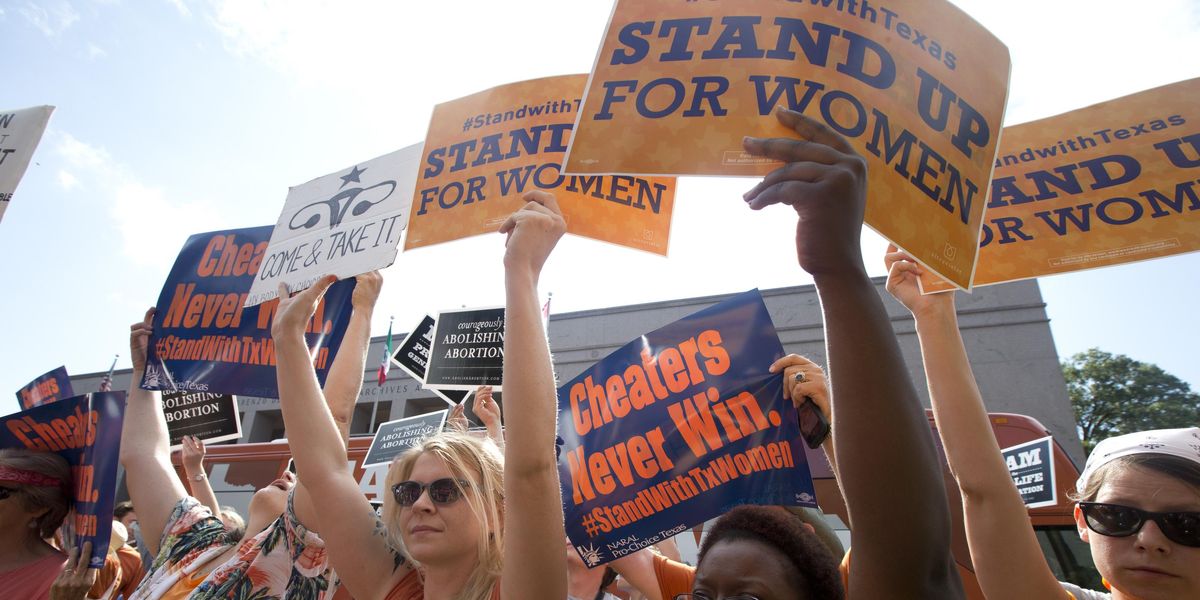 A near-total ban on abortions has taken effect in Texas.

On Wednesday, the state enacted the country's strictest anti-abortion law, which bars women from getting the procedure after six weeks of pregnancy. The legislation — which was passed in May — is a huge backwards step for abortion rights given that most women don't know they're pregnant within that six-week window.

Related | Breaking the Silence Around Abortion

According to Reuters, the law is extremely terrifying due to the fact that private citizens are allowed to sue anyone who "aids or abets" an abortion after six weeks, even if they are complete strangers with no connection to the people they're suing. It also effectively incentives people to act as anti-abortion vigilantes by entitling them to a minimum of $10,000 in damages, plus attorneys' fees, if they win the case. And needless to say, many took to Twitter to voice their horror and concern over legislation that allows you to "'snitch on your friends and neighbors for money.'"

I think I’m finding the “snitch on your friends and neighbors for money” aspect of the Texas abortion ban even more horrifying than the ban itself. The ban doesn’t surprise me, I’ve been watching them try to do this for decades. The vigilante system? That’s new

Welcome to Texas, where we value the life of a child so much we will pay you to rat out your neighbor over an abortion AND ensure that your kids will NOT be protected in ANY WAY against the ongoing deadly pandemic. Here's your gun, no you don't need a permit.

In response to the legislation, President Joe Biden called it a violation of the protections offered by the Supreme Court's Roe v. Wade decision in 1973. Despite this precedent though, the Supreme Court — which has a 6-3 conservative-majority — declined to act on an emergency request to stop the law from taking effect.

Texas SB8 will impair women's access to health care and, outrageously, deputizes private citizens to sue those they believe helped another person get a banned abortion.

It's a blatant violation of the right established under Roe V. Wade. We will protect and defend that right.

"The Texas law will significantly impair women's access to the health care they need, particularly for communities of color and individuals with low incomes," the president said in a statement. "And, outrageously, it deputizes private citizens to bring lawsuits against anyone who they believe has helped another person get an abortion, which might even include family members, health care workers, front desk staff at a health care clinic, or strangers with no connection to the individual."

Not only that, but other politicians weighed in on the legislation, its potential effects and how to help, including Rep. Pramila Jayapal, who shared her own abortion story, and Rep. Alexandria Ocasio-Cortez's call for donations to a fund split between eight abortion rights groups.

For me, terminating my pregnancy was not an easy choice — but it was MY choice. And that is what we must preserve for every pregnant person throughout Texas and across America. https://t.co/XeY5MRdl7E

All across Texas, grassroots organizers have been protecting their neighbors and the right to choose.

Nearly half a century ago, the Supreme Court affirmed abortion as a constitutional right. This Supreme Court's refusal to overturn Texas’ law banning abortion is outrageous. Women get to control their bodies, not politicians and not judges.

The Texas abortion law is an attempt to legalize harassment.

It is as cowardly as it is unconstitutional. https://t.co/l8C9lPm68Z

You can donate to AOC's split fund, here.